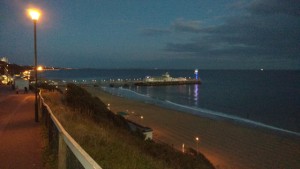 I have just been back to this elegant,  recently promoted to the football Premiership, but for a century or more one of our elite seaside spots. It has one of the longest continuous beach-front walks in Britain, the perfect place for conference delegates to practice their speeches, lined with smart, upgraded beachhuts, above well-manicured sands. Bournemouth caters for many tastes – from younger visitors attracted to one of the liveliest club scenes in the South, to music-lovers in town for the Bournemouth Symphony Orchestra. And bordering the town are two precious and quite distinct tracts of countryside – the New Forest just to the north and the Isle of Purbeck, in constant, clear view to the West.

Bournemouth is in the top crop of our seaside resorts, with its seven miles of unbroken sand. It recently scooped Coast Magazine’s Best Beach in Britain award, beating Spanish rivals on beach quality, cost and eco-friendliness. Judges praised the Dorset town’s atmosphere, nightlife and facilities for children and surfers.

One way to survey this boom town’s winning assets is to take a 500 feet high ride in the Bournemouth Eye, a helium-filled balloon tethered by a steel cable in Lower Gardens.

The promenade along the long sandy beach is one of the best in Britain. Paths lead up into the chines, steep-sided, green ravines leading down to the beaches, unique to these parts. ‘Walk the asphalt paths of Branksome Chine,” urged John Betjeman, “in resin-scented air like strong Greek wine”. Robert Louis Stevenson wrote Dr Jekyll and Mr Hyde in a house in Alum Chine. A plaque marks where it stood.  (Look out for Purbeck ice cream – “farm made and natural”.)

Projects in Boscombe, a mile east of the town centre, show how Bournemouth is refreshing its past and innovating for the future. The splendid 100 year old opera house (venue for Pink Floyd and Led Zeppelin in the 1960s) reopened in 2007 in all its plush Victorian elegance. Next came the sprucing up of old Boscombe Pier. Then the rebirth of the humble beach hut. Hemingway Design (they created the Red or Dead fashion brand) turned dilapidated 1958 buildings into the sharpest beach huts around, to buy or rent for the day.

The Russell-Cotes Art Gallery and Museum is a favourite old museum, jam-packed with fascinating things. And it began as a birthday gift. Local hotelier Sir Merton Russell-Cotes built the Art Nouveau villa, perched on the Bournemouth cliff top, as a present for his wife Lady Annie in 1907. Sir Merton filled it with paintings from his collection, by Rossetti and other artists, and items acquired on his world travels, and they gave it to the town. The great actor Sir Henry Irving is fêted in the room where he stayed; other items honour his contemporaries Ellen Terry and Sarah Bernhardt.

The town centre Oceanarium dips into far flung waters, from the Amazon to Africa, from the Great Barrier Reef to the Ganges. But all those red eared turtles, piranhas and flashlight fish from the Abyss are only the hors d’oeuvres.

The aquarium claimed to have the world’s first interactive “dive cage.” Without getting wet, visitors meet “virtual” great white sharks and dolphins, before the entire cage is swallowed by a blue whale, the world’s biggest mammal. www.oceanarium.co.uk

Read all about it.

So much for fish n’ chips served in newspaper. Bournemouth pushed the idea to its ultimate, and wrapped an entire Parisian-style brasserie in an old newspaper office. The elegant old Daily Echo building had stood empty since the 90s before it was restored to this novel use. The restorers brushed up the Art Deco architecture, retained the high ceilings, and added crystal chandeliers and a black and white floor terrazzo. The huge room where newspapers  once poured off the presses is the Print Room brasserie. The paper’s reception is the Ink Bar. www.theprintroom-bournemouth.co.uk

There’s more new from old in Club 1812, a cocktail and live jazz  bar in the former mansion of Bournemouth’s founder Captain Tregonwell.

Rooms with a view

In a town of so many hotels, you need to be distinctive to stand out. The Urban Beach in Boscombe has a jolly informality about it. The fear that we had stumbled into some grungy hang-out for surfers was quickly dispelled by the unpretentious quality of our room. I liked the big hand-painted Japanese headboard, the Fogarty duck down bedding and the Arran aromatics toiletries. The bar is full of invention, with a long list of cocktails and smoothies, and “triple certified coffee.” Easily the liveliest boutique hotel I have stayed in. The ethos of “sustainability, smiling and having fun” extends to the sister restaurant, the Urban Reef, 500 yards away on the seafront.  We basked behind a three-storey high glass window, flooding the building with sunlight. www.urbanreef.com,  www.urbanbeachhotel.co.uk

It was in the stylish Edwardian Hotel Miramar where Lord of the Rings author J.R.R. Tolkien used to stay. The Langtry Manor is the very house King Edward VII built for his mistress, actress Lillie Langtry (today, four poster beds, Jacuzzis and Saturday night Edwardian banquets, www.LangtryManor.co.uk). The Cumberland is one of the finest Art Deco hotels in Britain. Www.cumberlandbournemouth.co.uk.

Just above Bournemouth, at the foot of bustling southern England is a rare and precious medieval mosaic of a landscape. Today the New Forest is not very different from how it was when William the Conqueror set it up as his hunting haunt.

Where else would you see a small herd of cows, more appropriate to India, browsing free over an unfenced village green, as in Beaulieu, close to the National Motor Museum? And the ponies. You suddenly encounter one, standing still and nonchalant in the middle of the road. In September they are joined by pigs, set loose to munch on the acorns on the wide, natural lawns. These wandering animals – there are donkeys too – are a remarkable link with history. They are owned by “commoners”, local people who inherit the right to let their animals graze at will. For centuries they have played an essential role in keeping down the scrub, letting the rare forest nature flourish.

The best way to enjoy the park’s remarkable landscape and nature is on a bike. Mmiles of quiet roads thread through the forest’s ancient heart, many with no traffic at all. There are high views as far as the Isle of Wight, shady valleys, and mysterious ways deep into the trees. Stay alert and you may have the wonderful bonus of coming unexpectedly upon the local prestige wildlife. Look (and listen) for Dartford warblers in the gorse.

Visitors prepared to make a quick turn off the main road through the forest can connect with the its distant beginnings at the Rufus Stone, near Cadnam.  It marks the spot where King William II was killed by an off-range arrow in 1100, not long after his father, the Conqueror, set the place up a royal hunting chase. (Or was it murder?) Another link with the past is the ancient Knightwood Oak, near Lyndhurst. The forest’s largest oak is a still thriving example of the ancient art of ‘pollarding’, where wood is harvested without killing the tree. www.newforestnpa.gov.uk

Dorset is a county of contrasts. An easy afternoon’s drive north from Bournemouth might start at the Sandbanks Peninsula, Dorset’s most affluent corner. Just offshore, in Poole Harbour, is Brownsea Island, with its tenacious population of red squirrels. A few miles north is pretty little Wimborne Minster. The twin-towered church (minster) dominates this compact ancient town centre, with its narrow streets, courtyards and lots of one-off shops. Two miles west, Dorset turns remote and mysterious – and floral – in the Iron Age hill fort Badbury Rings. The National Trust look after this wide open grassy place. 14 species of orchid grow in and around the concentric rings of bank and ditch. There are high views all around, deep into Hardy’s Wessex.

Most tantalising of the out-of-town attractions, visible across the bay from the centre of Bournemouth is the Isle of Purbeck (not a real island, but a beautiful tucked-away corner behind a high ridge), another of this county’s abrupt and intriguing gear changes. (41 minutes, 19 miles, by car to centre point Corfe Castle from central Bournemouth.)

It’s much as it was when Enid Blyton set her Famous Five stories here. Take lashings of ginger beer and hunt down the locations (www.gingerpop.co.uk.)

Enthusiasts have restored the steam railway to Swanage she would have ridden (www.swanagerailway.co.uk.)

Corfe Castle stands gaunt and tremendous on its high hill above a pretty stone village. Britain’s Serengeti is the Studland National Nature Reserve. Instead of lions and elephants this heathland hosts all six British reptiles – adder, grass and smooth snake, sand and common lizard and slow worm. And do walk the soft clifftop turf of this crinkled coast – the epic SW Coast Path starts here.

Clouds Hill, a secluded cottage deep in the woods near Wareham (40 minutes by car, 21 miles)was the last home of T.E Lawrence, one of our most enigmatic heroes. He was propelled to fame by his role in the Arab Revolt against the Ottoman Empire of 1916–18, and immortalized in David Lean’s 1962 film Lawrence of Arabia. He became a mechanic in the RAF, then retired to his beloved Clouds Hill. He was killed in 1935 in an accident riding his favourite motorcycle close to the house. Today Clouds Hill is one of the National trust’s most unusual properties. The sparse rooms are much as he left them. There’s an exhibition on his life. Look for the sleeping bag which George Bernard Shaw and Robert Graves are said to have slept in on visits. Stolen in the 1960s, it was anonymously returned in 2001.