Paula Hawkins has just published her second novel Into the Water. It will certainly be made into a film, as was her debut thriller The Girl on the Train, which sold 20m worldwide. The movie of that book starred Emily Blunt as the dysfunctional protagonist.

My article below, posted in October 2016, explores the way the writer used places, real and imagined, as important players in the story.

The film of Paula Hawkins’ The Girl on the Train opened in cinemas in 2016.  Into the Water is published by Doubleday. 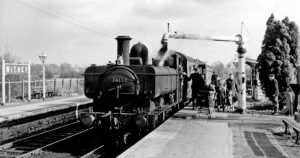 Witney Station – key location in The Girl on the Train

So it is settled. We don’t have to worry about the, appropriately, confused geography in The Girl on the Train. (Appropriate, because it is about a person who has an uncertain grasp of what she did or did not actually see from her carriage on her morning commute into London.)

In the movie, (2016), Paula Hawkins’ story, together with location and trains, with all its impossible, in the real world, routing, is shifted to the US. It all happens in and around New York.

Yet I am still a little disappointed. Many of us will know well the place where the main character, Rachel, starts her trip home in the evening, often with a can of G&T from the station Whistlestop store.  It is Euston station. A real place. Easy to relate to for any regular passenger on London Midland, Virgin or London Overground services. (In the film, she refuels with a martini at the Grand Central oyster bar.)

After that, reality gets derailed. In the book Rachel lives in the fictional Buckinghamshire new town of Ashbury. “The 0804 slow train from Ashbury to Euston can test the patience of the most seasoned commuter. The journey is supposed to take 54 minutes, but it rarely does.” Which is suspiciously like the timing for the real-life trains from real-life Aylesbury, except that they run into Marylebone station in London.

In a spirit of fair play, I must say that Network Rail are doing a good job these days, and the idea of trains stopping dead at a red light for several minutes every morning is now a bit far-fetched, at least on this route. And we can’t blame “leaves on the line”: that is an autumn phenomenon, and this book is set in the summer. Besides leaf fall is something that happens, once again, on the Marylebone line.

And where is Ashbury? If it’s not Aylesbury, it could be new town Milton Keynes, but then, Rachel would be on the fast, non-stop train, not on the slow stopper, looking out of the window every day in North London.

But it can’t be there anyway, because the line then takes an abrupt, and very fictional, veer to the north-west and ends up in Witney, which is a very real place in rural Oxfordshire, and last had a railway station, which would have been served from London’s Paddington station, in 1962.

Does it matter that a writer, who, being British, would certainly have a rough idea about where commuter trains run from to London, and when riding these trains is an essential, running plot line in her book, plays fast and loose with geography?

I don’t think so for a moment. It is the writer’s prerogative. Another way of her telling us that she is in charge of this narrative, and in any work of fiction writers can arrange places wherever they like, and who are we to try an impose order and exactitude onto their details? Just don’t try buying a ticket to any of those places.

I am still looking forward, though, to discovering if the scriptwriter indulges in the same sort of cartographical sleight of hand in the US setting in the film. Or is it considered a something too unimportant to be replicated?