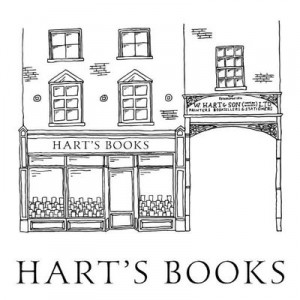 With the opening of independent bookshop Hart’s, in Saffron Walden in Essex, and better news about the sales  elsewhere, there are signs that the printed book is coming out of terminal decline in its struggle against the e-book.

As technology develops, devices – from LED lights to washing machines – become better, cheaper, faster and more efficient. The general rule is, we don’t turn back. Who would willingly revert from a computer keyboard to a clumsy typewriter?

Engineers and designers will perfect all-electric, self driving cars, and we will embrace them, just as we turned from the horse to the bicycle. Pity about the horse, not such a pity about the internal combustion engine, but that’s progress. We will control household appliances by our voice. The clothes we wear will monitor our health and well-being.

A similar technological sunset appeared to await the book in the middle 2000s. Now wasn’t that an astonishing device, the e-reader? I remember an early review in the Guardian. The screen was so clear and bright, you could read it in sunlight. This miraculous reading aid arrived, in an online store near all of us, and began to put bookshops out of business.

But then this one particular march of progress refused to move steadily in a straight line. In the US in 2015 eBook sales declined from $1.6 billion to $1.4 billion, according to figures from the Association of American Publishers.

In February 2016 The Bookseller reported that e-book sales for the UK’s five biggest publishers fell in 2015. Their collective figure was down 2.4%,, to 47.9m units. The Guardian noted that this was the first drop in numbers of books sold in this medium for the “big five” since the digital age began. Have sales of the eBook reached their peak, or is this merely a pause in the the advance of electronic reading?

It is probably too early to say, but we do seem to have reached an interesting point in the history of the printed book, after several years of depressing decline. In 2015 the bookseller Foyles returned to profit thanks to the success of its new London flagship outlet, a massive emporium of the printed word on five floors in a former college building in Charing Cross Road.

Also in 2015 Waterstones made its first annual profit since the financial crisis struck. James Daunt, managing director, described it as “the best true and underlying performance for this business for seven to eight years.” Underpinning Waterstone’s revival is the improving fortune of physical books. Sales of paperbacks and hardbacks rose 3% in the first half of 2015, the first rise since 2012.

Opening a mega bookstore, as Foyles did, in central London may not be such a big gamble. It was joined, in 2015, by another large new Waterstones on Tottenham Court Road. The challenge is to repeat that in towns and cities. There customers do at least have the choice of a real bookstore, with about 300 Waterstones nationwide. But in most places it is that, or nothing. There has been a grievous decline in the number of independent booksellers since the start of the digital revolution.

In 2014 almost twice as many bookshops closed down as new ones opened. There were 939 independents left in the UK and Ireland, compared with more than 1,500 in 2005, according to figures from the Booksellers Association, although by mid 2015 there were already signs of a renaissance.

The opening this month (April 2016) of Hart’s Books in Saffron Walden in Essex is a notable event in books, even if the movers in this story are familiar. Behind it once again is James Daunt, who as well as running Waterstones, heads the much-loved string of seven independent Daunt bookshops in London.

His company struck a deal with W Hart and Son, whose bookshop, with a 170-year history in the town (43 miles north of London) closed in 2007, to open a new independent bookshop (all the company’s bookshops run as separate units), trading under the famous Hart’s name.

The revival of the printed book began a little earlier in the USA. In Nashville Tennessee, the city’s last specialist bookshop closed in 2011, defeated by e-books and online sales. Local novelist Ann Pratchett (author of “Bel Canto” and “Truth and Beauty”) decided to fight back.

In 2012  she opened Parnassus Books, named after the mountain which in Greek mythology is  the pinnacle of learning and the arts. The bookshop, full of comfy armchairs, is doing so well against electronic rivals that it is expanding in 2016.

One thing sets it apart from most bookshops in the world – a community of  well-trained and friendly “shop dogs”, many of them rescue dogs. Naturally the store has a good list of titles with a canine theme.