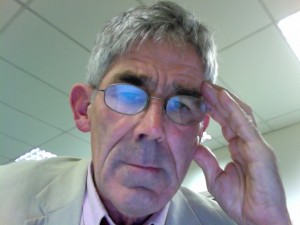 The writer, hands-free at his keyboard

I was in the early adopter of DragonDictate, and I do mean early. I obtained version 3, I think it was, free on the front cover of a computer magazine sometime around 2004.

It was a revolution in my writing life, and one I could have done with years earlier. I used to write feature articles based on hour-long interviews, and it would often take a morning or more of heavy keyboard labour to transcribe them.

I progressed through the various updates of the software on my PC, as it became steadily more accurate and easier to use. Then in 2010 I switched to a MacBook, and for a time I was adrift. There was, if I recall, a rather unsatisfactory hybrid which did work on the Mac, but it was only a stopgap. Then in 2011, the first version of  Nuance’s DragonDictate composed for the Mac was introduced, and I was impressed.

Now I’ve been given the chance to try out the latest version, Dragon Dictate for Mac, 4.0 which, incidentally, has the answer to my question of 20 years ago – how to transcribe those taped interviews without going slowly mad?

Mac users will know, or can easily find out,  about the Dictation tool in the Mavericks operating system. I mention it for the sake of comparison. But DragonDictate is a fully-fledged dictation programme. It’s like comparing the useful carrier bag you take to the local shop with a glossily coutured carry-on case for that first-class trip to New York. (Try the Briggs & Riley 22 Inch Carry On Expandable, $369.)

DragonDictate has a vast amount more to offer, from that helpful list of suggested alternatives to the sentence you just typed, to the facility to issue quite complex commands.

I’ve never been a careful, or indeed a fast typist. One of the benefits of dictation software is that it lets you try forms of words out, and then dictate another version just as quickly to see if that works better. Writers have always done this, of course, with pens and typewriters, and a lot of associated agony. I know.

Here is one big advance. I’ve been able to dispense with a microphone with this latest version. I simply speak at my (2010 model) MacBook, and the internal microphone does the job perfectly well, as it does with the Mac dictate programme. Could the dictation microphone have almost as short a life as the fax machine?

I skimmed through the 200 page handbook and found DragonDictate offering to be a helpful friend with proofreading.

“Dragon Dictate can read text back to you, whether you want to hear a specific selection, or an entire document. Hearing your text can help you catch mistakes, especially ones that a spelling or grammar checker might miss, and it lets you listen to the flow of your writing, so you can decide where to make changes during editing.” During those long and lonely composing hours, or when a desperate deadline is pressuring me, this could settle me me down.

There is page after page of useful commands, from “Move Backward(s) NN Word(s), Move Forward(s) NN Word(s) (where “NN” is a number up to 99)” to searching any document for a word or phrase, and

moving your cursor simply by issuing commands, with something called MouseGrid. It really does pay to spend some time with the handbook and writes down the commands you feel might help you.

Here is a really nifty feature. If you’re working in a programme that does not offer full text control (where you can’t dictate text and then manipulate it through voice commands), simply call up the Express Editor Window. It floats above the application. You simply dictate directly into this box, then press “transfer” to send your words into the application you’re using. It works, effortlessly.

Dragon Dictate even seems to have the facility to ignore extraneous noises, just as you never hear them in a well primed broadcast, because they’ve been edited out. “Dragon Dictate will do its best to ignore the well-known hesitation noises “ah”, “er”, “uh”, and “um”.

The ability to transcribe a pre-recorded audio file on an iPhone or other device is a big advance. Think of it. You’re driving home in all that terrible traffic, but now dictating as you go. Back at home you transfer the file and Dragon Dictate transcribes it while you pour yourself a drink. It worked for me, but with limited accuracy. I don’t think I trained the transmission function sufficiently. The main issue was transmitting the file. I found it easier to email it to myself.

I highlighted two issues in my 2011 blog, inserted words annoyingly starting with a capital letter and initial words infuriatingly starting in lower case and sometimes with additional spacing. I’m not sure that’s been eradicated, but I did find “capitalization editing commands”, which ought to help. And if that first word still comes up lowercase, Dragon gives you it in uppercase as one of the spelling alternatives in the box on your screen. You simply say “choose X”.

Will something that makes the physical side of the writing process so much quicker and easier lead to better writing? I don’t know how we could create an experiment that would convincingly show one way or another. For my part, I have no doubt that it promotes better writing. True, there is a danger it could make you verbose, as it is so easy to turn your thoughts into words on the page. But we are all, well, most of us, capable of limiting what we’re saying to the people we are talking to, and doing the same in print is hardly a difficult skill to acquire.

My overall verdict? Dragon Dictate  for the Mac has become a powerful assistant, willing to take over most, if not all, of the tedious work we used to do on the keyboard.

Where is this going?

I speak as somebody who marvelled at how much the photocopier could help me at university. I am no futurologist, but I can easily see a time when computer manufacturers could dispense with the keyboard altogether.  A problem will remain. Imagine 100 people in a busy office, all talking at their computers. So… thought commands? Don’t rule it out.

Or just talk quietly. This is an example of me almost whispering… Now I really am whispering…

*   Full disclosure. Naunce  provided me with its Dragon Dictate  software.