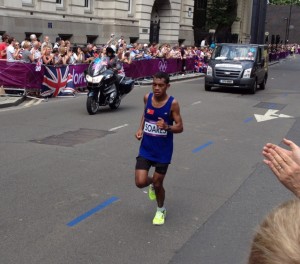 Ten years on from the cameo part an athlete few of us have heard of, Augusto Ramos Soares, in the London Olympics of 2012.

He will not have had the equivalent of £4 million spent on him – that’s the estimated sum you need to invest in an athlete to make him or her competitive enough to win a medal these days – so he won’t win anything, but those of us who saw him didn’t remember him as a contender anyway. He was the very opposite, the man in a heroic last place, each time the runners passed us on those three eight mile circuits in central London.

This is my original article, written in August 2012.

No one moved after the penultimate runner in the Olympic Men’s Marathon passed by in the canyon of a street in the City of London where we had stood and cheered the athletes of the world for the past two hours. We all knew there was one very important person still to come, and we were prepared to give him all the time he needed.

And so, a full 30 minutes after the three leading athletes strode majestically and effortlessly by, there was a stir, then a buzz of anticipation, swelling into a crescendo at the far end of St Martin’s Le Grand. It spread like an aural Mexican wave along the crowd, lined two deep behind crush barriers draped with flags.

A slight man in a blue singlet came into view, running at a steady pace, his head inclined slightly down, with a fixed expression of steely determination on his face. Augusto Ramos Soares of the new nation of Timor-Leste was that final athlete. We cheered him until he was out of sight, turning the corner to go around St Paul’s Cathedral.

When the high achievements of the winning London 2012 athletes are weighed, Soares will not even merit a footnote. But, I doubt if a single athlete in the entire games would have received such a warm, generous and extended ovation.

To our certain knowledge, he been last since the first few miles. We had cheered him twice before as he passed us on this just over 8 mile course. Now he was on his last lap, with only about 4 miles to go on the 26 mile route that would end in the Mall in a few minutes. He was still last. We knew that because directly behind him was a security motorcycle and the “sweeper” van which gathers up competitors who drop out. But, by his look of resolve, we knew he was going to finish the course.

The crowd was cheering Soares simply because he was running last. No other reason. I had seen several gallant losers in London 2012, all urged on to the finishing line by warmhearted spectators. Soares’ ovation was exceptional because it would have lasted so long, with big crowds lining the entire route.

As often as not, unless they’re injured or ill, competitors trail the field for very obvious reasons. They come last because they are from poorer countries, where training, diet and equipment falls far below what is standard in the richer nations. It was even more true of this athlete.

Soares formed half of the first official team from Asia’s youngest country, founded just 10 years ago. His teammate Juventina Napoleon had finished last but one, in a personal best time of 3:05:07, in the women’s Marathon the previous Sunday. According to one report the pair started training only two months before the race, completing their preparations in Portugal.

Their country of 1.2 million people, the former East Timor,  has a tragic past, and a bright future. For 30 years, from 1975 to 1999, it languished under the repressive control of Indonesia, which annexed it after the Portuguese ceded control after 300 years.

An independent report commissioned by the UN transitional administration in East Timor said that at least 100,000 Timorese died as a result of Indonesia’s occupation, from violence and the effects of poverty and food shortages. The people voted overwhelmingly for independence in the plebiscite of 1999, and country became fully independent in 2002.

Even today, 41% of the Timorese population continues to live below the national poverty line of $0.88 per day. The 25-year-old Soares told The Guardian: “In my village, no one has any skills or knowledge. If I didn’t have this opportunity, I’d be doing what my parents are doing: farming. Now I represent my country to the rest of the world and prove that…Timor-Leste can do this.”

These are happier times for Timor-Leste. The country has successfully negotiated elections this year, for president in the spring and parliament in the summer. It was commended by the US for the way it conducted them.

Timor-Leste has done a deal with neighbouring Australia and now has access to huge oil and gas reserves in the adjoining seas. If it spends wisely, it should be capable of bringing its people out of poverty. There is an emerging tourist industry. Earlier this year the country staged its third marathon, in around the capital city of Dili, and attracted athletes from around the world. Timor-Leste should now have the money to fund development programmes for athletes such as Soares

In the event he did not finish the Olympic Marathon last after all. In that final few miles he overtook Tsepo Ramonene of Lesotho (as poorly equipped to produce champions as Timor), to cross the line in the time of two hours 45 minutes. (You can read about it by clicking here.)

That is a time beaten by many thousands of amateur runners in the London Marathon, in these same streets, over the years. But that’s not the point. Unlike those people, the gallant Soares had qualified for the greatest show on earth, proudly represented his country, and won the hearts of so many. He is a true Olympian.