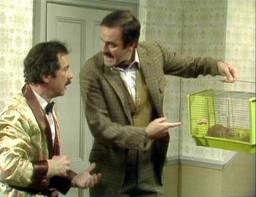 The great broadcaster and traveller  Sir David Attenborough confesses to a strong dislike of one creature out of millions. I think we all know it. The subject of this article, so we are told, is never more than a few feet away from any of us.

(This is an extract from my new e-book, David Attenborough – Talking to a Great Broadcaster.)

Let me introduce the scamper-on star of horror, supporting role in one of the most side-aching pieces of TV comedy ever (spoiler alert – the opening of the biscuit tin on the health inspector’s table in Fawlty Towers reveals Manuel’s pet: “But ees only h-hamsterr, Meesterr Fawlty”). Resourceful, adaptable. The first animal back to Hiroshima after the bomb. One of nature’s winners. It’s the rat.

It happened thus. “We were filming on a small coral island in the Solomons,” said Sir David. “Our accommodation was a bamboo hut. As soon as I saw the greasiness on the poles I knew we were in for a disturbed night. We moved to the middle of the floor and tried to sleep in a huddle, but then the scrabbling started and everyone started flashing their torches.

“Eventually a rat ran over my face. That was it. `I don’t think we should stay here, David’, said Henry, a stout-hearted cameraman from Yorkshire. `No, we bloody won’t’, I said. I was only wearing a sarong. We ran into the teeming rain and splashed through the village mud until we came to a roof on poles in the middle of some sand. `This’ll do,’ I said. So we slept there.

The rat is all our fault. In a balanced world it would be held in check, pounced on by plentiful owls. “They succeed because man is an extraordinarily wasteful feeder. With such an unlimited food supply, this burrowing, climbing omnivore is in clover.”

But it might not be wise to wipe the rat out even if we had a poison to do it – which we haven’t. It could actually upset the balance of nature. Better to keep the rat in its place, outdoors. Just as a weed is a wildflower in the wrong location, a rat could be described as tenacious wildlife wrongly positioned vis-a-vis its original career specification.

Politicians always raise a laugh in their speeches with that line about a squirrel only being a rat with a good PR agency. It’s a short step to image-manipulating the rat, as … rat. Yes, the rat does carry disease – the black rat wiped put a quarter of the population of Europe. But have you fed the pigeons in Trafalgar Square recently? The feral pigeon carries 500% more infection – 38 ailments to the rat’s seven.

Rats have come far. Where now? Oh, into space, surely. They have been on every voyage of terrestrial discovery there ever was. They are probably already there. Have you ever wondered what polishes off Lister’s half-finished vindaloos in Red Dwarf?