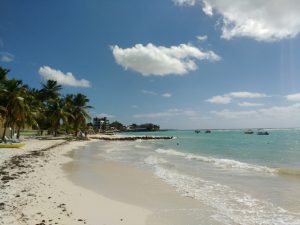 A beach in Barbados. By the writer

The social media storm over the baby turtles in the last episode of the BBC’s outstanding Planet Earth series, narrated by David Attenborough, did not really nail the culprit.

It was the emotional talking point in the programme on the interaction between man and wildlife. Baby turtles, newly hatched on a beach in Barbados, instead of making for the sea, set off inland to the lights of “coastal development”.

There’s a happy ending, we were told on Twitter. The camera team gathered all the errant turtles up (although I understood the hatchlings have to make their own way down over the sand, to “learn” the route in order that they could return as mature adults, to lay eggs in their turn) and delivered them safely to the sea. That’s the line to reassure the children with as they are tucked into bed. And we heard about the excellent work of the Barbados Sea Turtle Project.

I wish the project well, and I hope donations flow in to help them extend their work. But is there really a happy ending? The “lights of coastal development” still shine when the BBC isn’t there, or are they being turned off? I doubt it.

And isn’t the tourism industry getting off too lightly?

What is this “coastal development”? Local people have to live somewhere, and who are we, outsiders, to tell them not to develop close to a turtle beach, long ages old, when it is their crowded island to do with as they wish.

But is not so simple. Many islands in the Caribbean see tourism as their main form of income. And development close to the shore on Barbados includes beach-side hotels, restaurants and bars.

The very people who were so distraught when they saw the footage of baby turtles heading towards the lights of human habitation, aspire to a winter sun holiday in Barbados, and other islands, where they patronise these places and may not ask too many questions.

I don’t blame tourists for wanting to go there. My complaint is with the simplistic, almost naive way the experience of being close to turtles is marketed.

Take Turtle Beach Resort, Barbados, as one example. In a brief online search today I found this, on the main Barbados.org tourism site.

“There is a lovely story of the opening of the Turtle Beach Resort. The grand opening was, by coincidence, planned for a turtle hatching night. The bright lights of the hotel, and maybe the champagne, confused the baby turtles who waded into the hotel cocktail party instead of into the sea. Delighted guests helped them find their way to safety.”

But is not “lovely” at all. It was very irresponsible, and especially so if it really was planned. Those delighted guests should have been “horrified” guests. (I don’t know if this is close to the beach featured in Planet Earth, but it is another example of something that should not be happening there.)

Perhaps there were unusually bright lights for opening night, and on other nights lights were dimmed to not disoriented the hatchlings, but I couldn’t find anything on the hotel’s web site. Nothing about a policy, or a protection programme. If they care, why don’t they announce it.

If viewers care enough to flood social media with their concern about that turtle sequence in Planet Earth, they would be interested to know what a place called Turtle Beach Resort is doing about it. Sea turtles are protected by law in Barbados, but does the government make habitat protection a condition of planning permissions?

Tourism is an international business, and there is no excuse for not being aware of what is happening elsewhere. The tourist industry has known about the effect of bright lights on baby turtles, which confuse them for the light of the moon over the sea, for many years. Turkey was one of the countries leading the way as long ago as 1987, when the authorities stopped the building of hotels at Dalyan in order to protect turtles. The successful programme continues to this day. Turtle Beach is protected and open to non-intrusive daytrippers. The turtles live on.

Governments and the wider tourism industry has come up with more positive solutions. There are many more good examples of hotels, beachside cafes and restaurants where lights are screened or not being built at all in Costa Rica, the Maldives, Abu Dhabi and elsewhere.

There are hotels making sure their lights can’t be seen during turtle hatching season, and there is no need for Barbados to reinvent the wheel. Just get out there and hire some expertise, some marine biologists. Nothing new to learn here.

The Barbados Sea Turtle Project is doing excellent work, but we now need to know that developers of beachside hotels are equally committed.

The British public have shown how much they care about turtles. Now they have to care enough to demand clear answers from their hotels and travel companies when they visit these places.