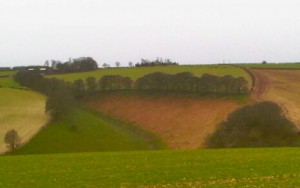 No time to stop. Tour de France riders will rush past many of these Wolds views, but other visitors should linger

Did the Tour de France organizers choose Yorkshire for the first two stages of 2014 race because the county’s wide open spaces reminded them of home? I would like to think so.
There is room in the huge, high landscape of the Yorkshire Wolds for some serious, long-distance cycling, with a hill or two thrown in as an early reminder of what real hills are before they reach the Alps and the Pyrenees.
The route hasn’t been announced yet, but the likelihood is that, in the opening two days, the riders will experienced the many landscape types in this huge, divided-into-three county, starting or finishing in Leeds or Sheffield.
I’m sure they will include the Yorkshire Wolds, which would receive its second spotlight of attention in two years. This landscape, stretching north from the market town of Beverley to the coastal resorts of Filey and Bridlington, is full of of unspoiled scenery, pretty little market towns, country houses and steep and rugged cliffs and coastline. It remains fabulously empty and unblemished, turning to the same, slow seasonal change down the centuries.
The Wolds was the subject of many of the works by Yorkshire-born artist David Hockney at his exhibition at the Royal Academy (A Bigger Picture), one of the major cultural events of this year (2012). The Yorkshire Tourist Board then invited visitors to experience the magnificent solitude of the real thing, launching the Hockney Trail, which links locations where the Yorkshire-born artist painted.
It doesn’t matter when you visit. The main features of the Wolds, small groups and lines of trees against wide open fields and steep valleys, are splendid in any season.
This is countryside for a slow car tour, or a not too strenuous trip by bike. You night start in Bridlington. Some of the most accessible trees depicted by Hockney line Bessingby Road in this small coastal town, where the artist has a home.
From here follow the trail down quiet ways to locations at Garrowby Hill, Thixendale and Woldgate Woods, making, as you go, connections between Hockney’s paintings and his actual (and in most cases, still standing) inspiration.
Kilham, once the capital of the Yorkshire Wolds, is where the artist painted, and filmed, his July/Winter Tunnel series. (The Kilham Hall boutique hotel won the Conde Nast Johansens Most Excellent Small Hotel in UK and Ireland award in 2010.)
Thixendale is said to be the most isolated (living) village in the Wolds. A “cartwheel” of 16 dales lead into it. Hockney painted Three Trees near Thixendale, a study of the same trees throughout the seasons, placing his easel at the side of the country road facing the trees. Nearby there’s a modern earthwork sculpture, Time and Flow, carved into the chalk landscape which forms part of the Yorkshire Wolds Way.
This is a prime example of England’s back of beyond, While other parts of Yorkshire were being despoiled by the Industrial Revolution, the Wolds, with no industrial value, was left untouched. The Wolds Way is one of the best ways in.
The 79 mile long path leads from the banks of the Humber estuary on a quiet amble across landscape of wide vistas, up and down tranquil valleys, along bracing hilltops with huge views, all the way to the headland at Filey Brigg. The Tour de France cyclists would accomplish it in an hour or so. For the mere walker it is possible to do it in five days, staying at B&Bs. You can leave your luggage and have it taken on. Another option is the linked “Try a Trail” walks, each 10 miles or so, which you can complete in a day. They are downloadable from www.nationaltrail.co.uk
One of the best places to savour the tucked-away remoteness of the Wolds is Wharram Percy, the most closely observed of Britain’s 3,000 deserted medieval villages. The ruined church is still visible, and you can pick out the outlines of many lost houses on a grassy plateau.
Tucked into this landscape’s ample folds are ancient market towns – Howden, Hedon, Pocklington, Driffield. There are so many welcoming pubs, fine churches and magnificent country houses, such as Burton Agnes and Burton Constable, outstanding Elizabethan country houses, as well as Sledmere House and Sewerby Hall.
Other Wolds highlights include the dry valley at Cleaving Combe, the superb stained glass windows at Warter Church, the ancient Millington Wood, Wold Top Brewery at Hunmanby Grange Farm, and, as a very interesting last stop, the RSPB’s Bempton Cliffs Nature Reserve.
Beverley is another, although technically it’s just off the Wolds. Way out in East Yorkshire, it isn’t the sort of place you chance upon on your way to somewhere else. But it is well worth a detour, one of Britain’s classic little 13th century minster towns. As well as the Gothic Minster, there are narrow medieval streets, Georgian terraces and decorated church ceilings.
We stayed just outside Beverley at the homely, family-run Tickton Grange country hotel. The place was on full coziness alert, with a roaring wood fire in a big fireplace in nearly every room. There seemed to be nothing on the menu that wasn’t from Yorkshire – fish fresh from Bridlington, and meat and vegetables from local businesses. My main course was an imaginative pan fried venison haunch steak, damson gin and turnips.