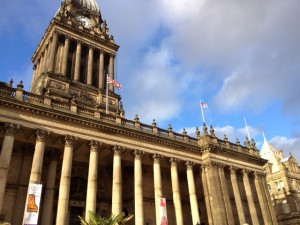 Leeds Town Hall – Tolkien would have know it well, but in a grimer incarnation

Tolkien, the feature film, follows the author of The Hobbit and Lord of the Rings, two of the greatest fantasy stories in the English language, from his schooldays in Birmingham, through his days as a student at Exeter College, Oxford, to the First World War, when he served as a soldier.

The film was directed by Dome Karukoski and written by David Gleeson and Stephen Beresford. Nicholas Hoult plays the young Tolkien and Lily Collins is Edith Bratt, who became his wife.

Tolkien lived in Oxford and worked for much of his life at the university, and the film rightly dwells on that. But it would be good if some reference was made, if not in this film, then perhaps in a sequel, to his time in Leeds. He lived and taught there, at the university, from 1920 until 1925.

See also my article on Leeds – the destination

In 1968 George Allen and Unwin put on its equivalent of the Ring of Power. It published the Lord of the Rings (LoTR) in paperback.

More than 10 years after it was first issued in hardback, John Ronald Reuel Tolkien’s epic adventure about hobbits, dwarves, elves, goblins and wizards was now on course to become the biggest adventure story of our times. And, towed along in its turbo-charged slipstream, came The Hobbit.

I was a student at Leeds University at the start of this enormous cultural phenomenon. What we didn’t realise at the time was that the spirit of JRR was all about us.

Although Lord of the Rings had been published in the 1950s, and the paperback of the Hobbit first came out in 1962, sales were tiny compared with what was to come. It took the combined three volume LoTR paperback to launch the literary sensation that culminates in the release of the first of Peter Jackson’s film trilogy of The Hobbit.

I first heard about the book from an enthusiastic American friend as we sat in the Parkinson Court at the University. Shortly afterwards my father presented me, as a birthday present, with the hardback trilogy of Lord of the Rings, which I still treasure.  I’ve no doubt that these are the first books I would rescue from a burning house.

As students, we were among the first to plunge into this fabulous adventure. These were dark days in the world. It was the height of the Vietnam war, and this book was the perfect escapist antidote, even though it too dealt with war.

Outside our imaginations, the best places to try to detect the aura of, and connect to, this great writer is in the places where he lived and worked, and that principally means Oxford. But in those days when background and connections were harder to research, nobody seemed to notice that Tolkien had been at Leeds University too, as an academic 40 years earlier, and would have known our daily walks, bus rides and conversational haunts just as well as us.

When I was at Leeds, the writer was still alive, and there seemed to be no need to pursue his past. For whatever reason those Leeds associations hardly came to light. I suspect it was because, in those days, with the writer still alive, only the books, then still so fresh and exciting, mattered.

Only recently has there been very belated recognition of his time in the city, when he set up various courses in the School of English that are still studied today, with the unveiling of a plaque on 2 Darnley Road, a semi-detached house in West Park, North Leeds where the writer lived with his family.

J.R.R. Tolkien was born in South Africa in 1892. He was educated in Oxford and fought in the First World War. After working on the Oxford English Dictionary, he came to Leeds University in 1920, aged 28, as a Reader in English Language, brought in to develop the linguistic side of the syllabus in the School of English.

He was made a professor a few years later. Some aspects of the syllabus he developed, such as Medieval Welsh, which he also introduced into the Leeds syllabus, were still present sixty years later. Works from his portfolio are still taught there, including an edition of Sir Gawain and the Green Knight that he produced at Leeds.

Staying in his first, unknown, address he travelled down to Oxford every weekend to the family home, to be with his wife Edith and sons John and later Michael. In 1921 they joined him in their first Leeds home in 5 Holly Bank, Headingley. Today hundreds of students pass the Holly Bank address every day on their way to the campus. Presumably Tolkien too,  would so many times have ridden the number 1 bus route, straight down the Otley Road the two miles or so to the University.

The landscape, taking out supermarkets and shops, is not so different today. Living there, he and Edith would have known, for example, the nearby and newly opened Cottage Road Cinema, still thriving in its centenary year of 2012.

Later (although I would have thought that was earler) he lived briefly in the now demolished  11 St Marks Terrace, which is prime undergraduate flats and lodgings territory a short walk from the campus – I myself lived very close by my first year. He would have walked up through the maze of tight back-to-back streets, so familiar to generations of students. Were there noisy, deep into the night weekend parties in his day, keeping him awake? I doubt wind-up gramophones had that much wall-penetrating power.

The third address was 2 Darnley Road. We knew nothing of this, as students. But even in the 1960s it doesn’t seem the city paid much attention, either. Today, of course, you can visit the very street, virtually, on Google Maps.

At Leeds, alongside his academic work, Tolkien was developing his fiction. He wrote poetry for a Leeds student magazine The Gryphon, with elves and kings among his subjects, and did some work for his first big work The Silmarillion. He was honing his story-teller’s skills. In 1920 he started to write The Father Christmas Letters, for his son, John. In 1925 he wrote a story for his second boy, Michael, based on losing a toy dog on the beach at Filey, on the Yorkshire coast. (This was published in 1998 as Roverandum.)

We will never know now, but it would be nice to think that he turned over the first roughly-sketched notions of the world of elves and dwarfs on the No. 1 bus, riding down Otley Road and Headingley Lane, then down Woodhouse Lane and across Woodhouse Moor, on his way to work. Perhaps they were light relief from some abstruse details of Old and Middle English philology, or second year Old Icelandic and Medieval Welsh.

He may well have drawn linguistic inspiration from, for example, the work of the Yorkshire Dialect Society, of which he was a member. And it is likely that at least one local name, wetwang (a wet field, marshy place), made it into the Lord of the Rings.

Tolkien left Leeds in 1925, returning to Oxford to become Professor of Anglo-Saxon, a post he held until 1945. It wasn’t so long after, in 1928, when he is believed to have written the first line of the Hobbit on an exam candidate’s blank paper: “In a hole in the ground, there lived a hobbit”.

The book had its first, pre-publication, review in 1936, from 10-year-old Rayner Unwin, the son of publisher Stanley Unwin. He wrote: ”Bilbo Baggins was a hobbit who lived in his hobbit-hole and never went for adventures, at last Gandalf the wizard and his dwarves persuaded him to go. He had a very exciting time fighting goblins and wargs. At last they got to the lonely mountain: Smaug, the dragon who guards it is killed and after a terrific battle with the goblins he returned home—rich! This book…should appeal to all children between the ages of 5 and 9.”

Today we feel we need to know everything we can about such a fertile imagination, and the inspiration for every last character. In one physical respect, Tolkien’s creation has come back to the city where he does seem to have felt briefly at home – he wrote: “I was devoted to the University of Leeds, which was very good to me, and to the students, whom I left with regret. The present students are among my most attentive readers.”

The collection of swords from the Hobbit film and the Lord of the Rings movies, were on display in the city at the Royal Armouries Museum in Leeds. The weapons, including Andúril, wielded by Aragorn in the Lord of the Rings films, and Glamdring, the sword of the wizard Gandalf and Sting, carried by the hobbits Bilbo and Frodo, were crafted by Peter Lyon, the master swordsmith who created the weapons for the movies.

The university itself holds a collection of Tolkien’s writing, including a letter he wrote to Leeds author Arthur Ransome in 1937, shortly after The Hobbit was published. Tolkien, who had agreed to several of Ransome’s suggested edits, wrote to Ransome: “sales are not very great”. The Hobbit has since sold an estimated 100 million copies.