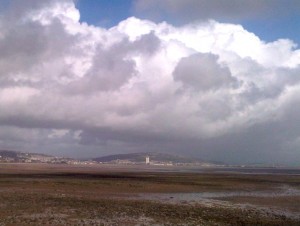 Swansea Bay. The city is a candidate for 2017 UK City of Culture

Swansea has been shortlisted as one of the candidates for the City of Culture, 2017

Craning my neck I could see the dreamer’s window in one of the most famous back bedrooms in literature. From here, at no 5 Cwmdonkin Drive, Swansea, a 20th Century superstar looked down over the town to the “twin tongued…carol-singing  sea” and fuelled his fantasies.

This is one of those outwardly ordinary places that set your pulse racing. In this very room, in A Child’s Christmas in Wales, Dylan Thomas turns the gas down, gets into bed, says some words to the “close and holy darkness” and sleeps.

These are the same back gardens where he threw snowballs at Mrs Prothero’s cats. I did see a robin, in full voice, all his fires burning bright. But no cats, “sleek and long as jaguars”. And no postmen with “wind-cherried” noses; they are all in snug vans these days.

No 5, where Dylan was born and lived for his first 20 years, is a shrine on a steep hill in the posh part of Swansea in his day. I had struggled up and read the blue plaque to confirm this was really was where the uncles examined their cigars as if they were unexploded bombs, and Auntie Hannah attacked the parsnip wine.

Just over the road is Cwmdonkin Park, a vacant stage for the imagination where the trainee rascal with his tousled hair and fake angelic looks played and grew up and drank from the tin cup at the fountain (still there, but minus cup), and was thwacked on the leg by the park keeper who rang the bell every night at closing time. Today the sound of children playing in this bountiful, well-tended park resounds around the world in such works as Portrait of the Artist as a Young Dog.

Dylan wrote half his poems – “And death shall have no dominion” is the best know – and many short stories when he lived at no 5. By the time he left the family home in 1934 he was one of the most exciting young poets writing in the English language.

Growing fame dragged him to London; gravity tugged me downhill only as far as the beach, part of that famous curve of coast that another poet, Walter Savage Landor, declared was better than the Gulf of Salerno, and  Naples “for scenery and climate.” This was   where Dylan’s imagined two “hale young men” walking into the waves, still puffing away on their pipes.

2003 is the 60th anniversary of the death of Dylan Thomas in New York, aged just 39. It is a fine time to recall how high he sits in the 20th Century cultural pantheon. Try this test. What do Marilyn Monroe, Elvis Presley,http://www.wikipedia.org/wiki/Albert_Einstein Albert Einstein and Dylan Thomas have in common? They all appear on probably the best known of all record sleeves, the Beatles’ Sgt Peppers Lonely Hearts Club Band. John Lennon put him there, recognising a great influence on his work.

Catherine Zeta Jones, a Swansea girl, and Michael Douglas named their son Dylan. James Bond actor Pierce Brosnan went one better: his son is christened Dylan Thomas. The name was 27th in the 2002 list of favourite boys names. It is likely to go higher still when Dylan comes to a cinema near you later this year (2003).

For years Swansea has sat on an untapped touristic goldmine. Could 2014, the anniversary of hius death, be the year it cashes in? There are guided tours of Dylan’s Swansea. And the council has just separate trails, to walk yourself, linking places associated with his life and riotous times. Many of these locations are found, often thinly disguised, in his works.

There are few left now who recall the loquacious, swaggering, dazzling Dylan – although if a barman tells you he was a regular in that pub, he is probably truthful. As a student at the art college, where Dylan had his best friends, my late mother was one of many to receive the silken-tongued chat up.

My journey began in Paddington for a train trip Dylan made many times, lured back to his “ugly, lovely town”. (The city fathers can demand a re-write here. That industrial hell on the outskirts is all gone now; and the grimy old port has been replaced with a sparkling new marina and smart apartments. There is a statue there of the man himself; nearby is Capt Cat, from Under Milk Wood.)

I walked out of the little train terminus, past the Bush Hotel, where he spent his last night in Swansea before catching a train for his fateful trip to the USA, and into the city centre. Here the young Dylan “mucked about as chirpy as a sparrow after the sips and titbits and small change of the town” as a reporter on the local paper, turning many a working day into a pub crawl.

Much of central Swansea was flattened in the war, but many Dylan locations from stories like Old Garbo survive. The BBC studios, with their ornate and distinguished fascia, where he broadcast in that voice like warm treacle, is still there. The bombed Kardomah Cafe, where he plotted artistic revolution with his friends, is reincarnated in Portland Street.

The best of old Swansea survives in Wind Street. Leading off it are the narrow Green Dragon Lane, with its original rutted cobbles, and the splendidly named Salubrious Passage; here Swansea folk experienced first hand – literally – Dylan’s wicked humour. He and a friend would drop heated pennies from upper windows and roar with mirth as passers by picked them up.

Swansea’s oldest pub, the No Sign Bar, was a regular haunt, renamed the Wine Vaults in his story The Followers. Inside it is   dim and rambling and reassuringly untarted. We sat in there in the soft slumber of mid afternoon and tried to sense his lingering aura.

Just down the hill Swansea has links to the freshly-lauded Michael Douglas and Catherine Zeta Jones, in Morgan’s Hotel, converted in 2002 from old port buildings and clearly aimed at the city’s famous daughter’s custom. They let me try the “Zeta” suite, with its daring “his and hers” twin shower, cinema-sized TV, and a ceiling somewhere up in the lower stratosphere.

Centre of gravity for Dylan mania is the Dylan Thomas Centre, opened by another fan, US President Jimmy Carter, in 1995. This is a fulsome homage in books, letters, photos, his original typewriter, and audio-visual displays. I liked the love letter to Caitlin on a cheque stub. The centre is staging a year-long series of events, including monthly exhibitions including the Edward Ardizzone drawings from A Child’s Christmas in Wales.

From here I took the trail west around his beloved bay to the small fishing village of Mumbles for a lucky dip of Dylan sites. But not by the much-missed Mumbles Train, said to be the world’s first passenger railway (a solitary tram car survives in Swansea’s Maritime and Industrial Museum). Dylan wrote of  “rattling along to a beery and fleshy Oystermouth.”

We passed places close to Dylan’s home which he knew well. The Patti Pavilion (the Melba Pavilion in his stories), resited here by the adored Italian operatic diva Adelena Patti; then the grand Brangwyn Hall, with its splendid tapestries. Nearby is the memorial to Swansea Jack VC, the famous life saving dog.

Next comes St. Helen’s Cricket and Rugby Ground, where, in 1968,  I saw Gary Sobers achieve sporting perfection when he became the first person to hit all six balls in an over for six. Dylan came here and to the adjoining ‘bald and cindery’ recreation ground, with its fairs and circuses featuring in his radio play Holiday Memory.

On past the university, where Dylan’s rival Kingsley Amis taught, and whose book Lucky Jim is clearly inspired by  Swansea and its geography.

Beyond is Gower: Dylan wrote “one of the loveliest sea-coast stretches in the whole of Britain”  In 1956 it became the UK’s first Area of Outstanding Natural Beauty.

Later I drove to Laughrne, 30 miles to the west, his “timeless, mild, beguiling island of a town.” People come here for the graves of Dylan and Catlin, but far more uplifting is the Boat House, his only real home, where he wrote Under Milk Wood and Do Not Go Gentle Into That Good Night.

Some prankster Dylan would have applauded had turned the sign from the car park through 180 degrees, sending several people – and me – the wrong way. So by the time I rounded the headland to find the tucked-away building clinging to the cliff, the custodian was locking up.

No matter. I gazed over the estuary as the light seeped out of a grey West Wales day and an oystercatcher rasped a raw lament.  I understood why Dylan loved this beautiful, melancholy  place.