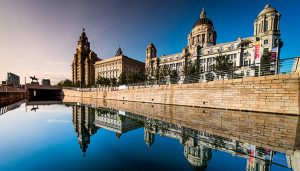 “50 Summers of Love” celebrates the brief and localised ascendancy of the flower over the gun, the pacifying power of rock music and, er, free love. San Francisco can claim authorship, but it was some boys from Liverpool who gave us Sgt Pepper’s Lonely Hearts Club Band and All you Need is Love in 1967.

These were the highpoints of  a year of big openings and anniversaries for Liverpool.

It is 50 years since Liverpool’s “phenomenal summer” in 1967.  The tourist website calls it  “a defining moment in modern culture and creativity”, the year the Beatles Sgt Pepper’s Lonely Hearts Club Band and All You Need is Love were released and the Mersey Sound poetry anthology was published.

The city’s big boost came in 2008, when Liverpool was European Capital of Culture. But the cultural transformation began in 1988, when Tate Liverpool opened –  the gallery holds the national collection of British art from 1500 to today, and international modern and contemporary art.

More museums have opened since. New districts have blossomed. There are shiny new attractions; fine old buildings have been renewed. I found chic hotels, one of the UK’s biggest shopping centres, Albert Dock and the historic waterfront and much more.

The Royal Institute of British Architects is the latest national institution to set up in the city, with RIBA North. This architecture centre opens soon on the Waterfront. It will showcase items from RIBA Collections. The first exhibition is ‘Liverpool: Mover, Shaker, Architectural risk-taker’.

2017 is the 300th birthday of Liverpool’s oldest city centre building.  Since 1959 the Bluecoat Centre has been a centre for creativity and contemporary art. Yoko Ono staged her first performance here in 1967. Her work will be on show in a larger exhibition, part of the “300 Days of Celebrations”  which the centre is holding.

One of 2017’s biggest events was be opening of The British Music Experience (March, 2017)  in the Cunard Building (one of the Three Graces) on the waterfront. This permanent exhibition is dedicated to the history of popular British music; it tells how rock, pop, dance and other musical genres influenced the last 60 years of British culture. Musical memorabilia includes David Bowie’s outfits.

Visitors may learn instruments and dance floor moves, and understand the rich heritage of British music, in its social and political context.

The Three Graces , the Royal Liver, the Cunard, and Port of Liverpool Buildings on Liverpool’s Waterfront are the joint emblem of Liverpool’s commercial might. The best place to see one of the best of all city profiles is from the River Mersey on one of the world’s most famous ferry rides, operated by Mersey Ferries. (The waterfront was given world heritage status by UNESCO. The citation reads: ‘The supreme example of a commercial port at the time of Britain’s greatest global influence’.)

This crossing was famously set to music by Gerry Marsden (Gerry and the Pacemakers) in ‘Ferry Cross The Mersey’ in 1964. In 2015, Sir Peter Blake – who designed the Sgt. Pepper’s Lonely Hearts Club Band cover – was commissioned to create a psychedelic livery ( ‘dazzle’) for one of the ferries, Snowdrop, a steward of the River Explorer cruise. Take the cruise to see the other side of the river.

There are many ways to sample the Beatles’ legacy. Mendips, (childhood home of John Lennon), and 20 Forthlin Road, where Paul McCartney lived, are safe for posterity.  Both, furnished in 1960s style, are owned by the National Trust – there is a joint visit by “magical” minibus tour.

But for many it has to be a visit to the Cavern Club, 55 years after The Beatles first performed on its stage. The club was opened in January 1957 by Alan Sytner. He was inspired by venues he had visited in Paris, where it was the custom to play jazz in cellars. He had one particular club in mind – Le Caveau de la Huchette. So the Cavern was founded on jazz – the first gig was by The Merseysippi Jazz Band.

In 1973, in an act of vandalism considered routine for the time, the warehouse buildings that housed the original Cavern was demolished, and the cellar filled with rubble.  It reopened in 1984, remade using the bricks from the original Cavern.  Although new groups perform there, there is an emphasis on tribute and nostalgia.

Beatles Story, the largest permanent exhibition devoted to the lives and times, the music, culture of  the group, comes in two parts.  The display in the Albert Dock building should twang poignant chords deep in your psyche, as you go from room to room and a fresh hit sound booms out in each.

Those over a certain age will recall precisely where you were when you first heard that tune. They whizz you from Woolton Village Fete (McCartney first meets Lennon) via the Casbah Coffee Club and the Star Club on the cobbled streets of Hamburg, on to Abbey Road Studios and the USA. There are images, memorabilia and video interviews with Paul McCartney,  Ringo Starr, Olivia Harrison and Yoko Ono.

The city’s 130 year old Walker Art Gallery is one one of the leading galleries in Europe, with Renaissance masterpieces, Tudor portraits and and a fine collection of Victorian and Pre-Raphaelite art. The gallery also has an outstanding display of contemporary art, including work by David Hockney, Lucian Freud and Bridget Riley.

Tate Liverpool opened in 1988 in a converted warehouse at the disused Albert Dock. James Stirling’s design left the exterior of the brick and stone building built over a colonnade of Doric columns almost untouched. He transformed the interior into a series of simple galleries suitable for the display of modern art. The collection embraces all media, from painting, drawing, sculpture and prints to photography, video and film, installation and performance.

The Museum of Liverpool is the newest major addition to the Liverpool waterside skyline, built in 2011 alongside the Three Graces. Said to be the world’s first national museum devoted to the history of a regional city, it is the largest newly-built national museum in Britain in over a century.

Attractions include a full-size replica of an old Overhead Railway carriage, a recreated 1870 Liverpool house and the chance to immerse yourself in the city’s rich sporting and creative history. Exhibits showcase popular culture, “and tackle social, historical and contemporary issues in an accessible, engaging manner.”

The Merseyside Maritime Museum and International Slavery Museum, again in a former warehouse, are four floors of exhibits showing the influence of water on Liverpool over the past 300 years.

All the city’s national museums are free.

Liverpool’s Victorian masterpiece is St George’s Hall, with its splendid Corinthian columns, vast portico, antique air-conditioning, chandeliers and gilded plasterwork. Dating from 1854, as concert hall and law courts, it was one of the finest neo-classical buildings in Europe, a proud statement of trading wealth. Charles Dickens gave regular readings here. After a £23m restoration, it was reopened in 2007. The interior woodwork is polished to a sparkle. The Great Hall, modelled on Rome’s Baths of Caracalla, with its floor of Minton tiles, and columns of polished porphyry – more royal purple – is gloriously decadent.

Liverpool is a city of two great cathedrals, each of them relatively new, bookending Hope Street.  The great sandstone Anglican Cathedral upon the hill, (built 1904 -1978), and the biggest in Britain, towers regally over the city.  Known as “The Great Space”, it is awesome.  It has highest and heaviest carillon of bells world and Britain’s mightiest organ. And the tower tour gives some off the best views of Liverpool.

But it is but hardly solemn. They were holding a service to honour Ken Dodd when I called, and that line from Happiness in the song sheet,  “A big old heaven full of stars above”, summed up the easy-going spirit of this people’s cathedral. It’s the largest thing Sir Gilbert Scott built: in a neat touch, they included his smallest design, the old red telephone box.

The other cathedral is the Metropolitan Cathedral of Christ the King.

Forget that perception of a city run down since the decline of its port. Liverpool retains one of the most impressive concentrations of elegant town houses for a city outside London. Building began in the Canning area around 1800. City surveyor John Foster drew up a grid plan of housing.

Liverpool’s elite had the money for luxury living.  Of the next hundred years many tasteful terraced houses were built, mainly in the Georgian style, on and around Hope Street, at the core of the Georgian Quarter.  The area recently took the Academy of Urbanism Award for ‘Best Street’.

Architectural landmarks of notes include the Everyman Theatre and the recently transformed Liverpool Philharmonic Hall, now 175 years old. Some of the city’s best restaurants, The Art School, 60 Hope Street and London Carriage Works, are in this area. So, too, are some cozy bistros,  such as The Quarter on Faulkner Street and the Pen Factory at one end of Hope Street.

One of Liverpool’s exciting emerging zones is the Baltic, once the factory and workshop district of the city during the slave trade of the 1800s. Today it is the heart of Liverpool’s emerging creative industry, the base for digital and creative businesses.  It offers music in once abandoned warehouses, exhibition space and studios and good new bars and restaurants. Constellations for brunch, for example. Camp and Furnace, with open log fires, vintage caravans, and street food, came second in The Times’ ’20 Coolest Restaurants in Britain’.

Another district of note is the city’s venerable Chinatown the first to be established in Europe. The Chinese Arch is the proud point of entry. It was imported from Shanghai, 13.5 metres high and the tallest standing arch in any of the world’s ‘Chinatowns’.

The Southport Flower Show takes place in Victoria Park. The 2017 theme is “The Curious Garden, inspired by a sense of mystery, wonder and curiosity”.

2017 is also the 10th anniversary of Liverpool Sound City, the largest international music, digital and film festival and conference in the UK, It celebrates upcoming and emerging artists, such as Florence and the Machine, The Maccabees and Ed Sheeran.

Echo Arena hosts big names in music. At the heart of Kings Dock, it is one of the biggest arena and convention centres under one roof in Europe.

Once Beatles fans besieged the hotels where their idols were staying. Now they have one all to themselves, although the hotel is open to people of any musical persuasion. The 4 star Hard Day’s Night Hotel is the first Beatles themed hotel.

They converted the Central Buildings (built 1884), retaining the imposing marble columns and internal spiral staircase, decorating each bedroom with an individual print by US artist Shannon. There are more Beatles references in the Malmaison Liverpool, a touch of Manhattan on Prince’s Dock, where a yellow submarine hangs above the first floor atrium. You sink into mile-high sofas in royal purple – a diplomatic mix of the blue and red of the two football teams. Hope Street Hotel is a boutique hotel, faithfully fashioned from a grand 1860 Venetian palazzo of a townhouse, in the Georgian Quarter.

Liverpool is now a regular stop for cruise ships. Vessels dock at the  Cruise Terminal on Pier Head, a 10 minute stroll from the city centre.

And once HS2 is built, although probably not until the early 2030s, travel time by train to London will come down from 128 minutes to 96 minutes.