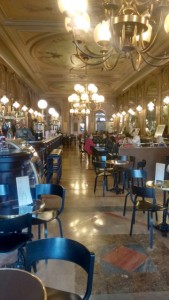 Cafe de la Paix, where Georges Simenon used to drink, tethering his horse to an iron ring outside

La Rochelle strives to be different. Facing the world on the Atlantic coast, it has always stood apart from the rest of France, one of the great seafaring cities. With typically French poetic verve, one of La Rochelle’s unofficial names is “Daughter of the Sea.”

The English crown ruled it, between 1154 and 1224. It has, variously, been religious rebel, fishing capital and environmental pioneer. And now it can claim to outdo Paris as the city with the better Inspector Maigret connections.

Inspector Maigret is back on British TV,  over the Easter period, 2016, with the third incarnation of pipe-smoking Parisian sleuth, played by Rowan Atkinson. Mr Bean, Atkinson’s best-known part, is enormously popular in France; it is, after all, the country of the great Jacques Tati.

The two new films are set in 1950s Paris, but filmed in Budapest.  In the opening  sequence of the  original BBC series Rupert Davies,  who played the title role, would be seen  striking a match on a wall  to light his  pipe. Search in vain in Paris today for that wall. It was probably mocked up in the studio.

La Rochelle has far more tangible links,  at least to Belgian Georges Simenon, creator of the famous trench-coated inspector, down on the historic quay.

The peripatetic Simenon, who lived at several addresses nearby in the 1930s, would ride into town and take his refreshment at the Cafe de la Paix. The metal ring to which he tied his steed is still there, on the wall outside the immaculately restored cafe, full in Belle Époque wood paneling, mouldings, floral paintings, chandeliers, and mirrors.

Outside the Cafe de la Paix, a deeper history pervades the  ancient harbourside. The image of three monster defensive structures defines La Rochelle as powerfully as the Eiffel Tower proclaims Paris. The formidable, ancient Saint Nicolas Tower stands at the old harbour’s entrance. Built in 1345, it shared defensive duties with the slightly smaller Tower of the Chain, right next door. The third tower, Tour de la Lanterne is the only surviving medieval lighthouse on the Atlantic coast. Its walls still bear graffiti from captured English seamen. A joint ticket lets you visit all three.

Saint Nicolas Tower has a new and unlikely use, as extreme sports venue. In 2015 brave and crazy divers leapt off the 120 feet high landmark in a round in the cliff diving world series.

Just like many Atlantic-facing ports, La Rochelle became rich through trade. Prosperous merchants left an impressive legacy in the old town centre. There are magnificent 16th and 17th century houses, built over open-sided arcades and around  easeful courtyards. One of the best is in the Cloister of the White Ladies, now government offices. Is painted in ochre to give it an Italian look.  My rule is that if buildings or courtyards look open,  you won’t be stopped: free to walk on in.

Some of the half-timbered facades recall the Elizabethan houses of Shakespeare’s Midlands.  (The direct link with England was much earlier.  The Plantagenet Henry II acquired La Rochelle through his wife Eleanor of Aquitaine.) What sets them apart are slates nailed over the wood to protect it from the sea air.

There is a nautical connection to the cobbles in some of the pavements.  They came here as ships’ ballast, brought back from Canadian shores. Many of the older buildings carry stone heads, some representing First Nations people from North America. And do look for Rue Nicholas Venelle. The Michelin Guide considered this street so handsome, it awarded it two stars.

The long, golden age of voyaging, fishing and trading over the world’s oceans may be over, but the city’s new Maritime Museum, opened in 2015, gives it an honourable retrospective view.

It tells the city’s story in  galleries inside a series of shell-shaped pavilions. The visit ends on the France 1, the nation’s former weather ship, once anchored far out out in the Atlantic.

There’s a celebration of Bernard Moitessier, “winner” in the first non-stop singlehanded round-the-world race in 1968-69.  However Moitessier did not hang around to collect his prize.  He sailed right on to Tahiti to “save his soul.”

Another feature in this waterside complex is the Aquarium.  It’s well worth finding the restaurant on the top floor. Three courses of excellent cooking, instead of the usual bland canteen fare you normally find  at big attractions.

La Rochelle has a claim to be called France’s greenest city.  It was the first to designate pedestrianised streets, and the first to bring in a public bicycle hiring scheme. You can find the eye-catching yellow bikes outside the Tourist Information office.  Simply register, then the first two hours are free. And do try the little electric ferry, shuttling across the Old Port.

In 2015  the city tested a driver-less electric bus. Guided by sensors, it jinked around the harbour-side,  dodging obstacles, and people.

There are direct budget flights from the UK to the city’s airport, but I prefer the train, just over seven hours from London. It pulls into the splendidly ornate station, its façade adorned with fish, crabs and shells.  This was the last  French station to be built in the grand style, early in the 1900s.

The local harbour may not be the piscatorial powerhouse it once was, but there was a bumper seafood harvest on the open counters  of the main market during my visit. (And if you want an indication of how seriously the French treat food, this market is open 365 days a year. After all, we don’t stop eating on Christmas Day.)

I toured mounds of all types of oysters, mussels and prawns. There,too, was algue, the edible seaweed I ate, as laverbread, in my boyhood in Wales. On yet another stall a proud producer insisted I sample the illustrious local fortified wine, Pineau des Charentes

Other regional treats include the nutty-tasting butter of Surgeres, in the local Charente region, red eggs from Marans and tourteau de charente, the local cheesecake burned black on the top.