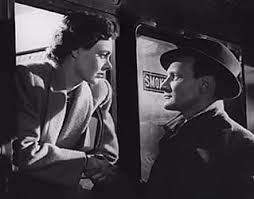 There’s a key scene in Brief Encounter when Laura and Alec reach the station where they are to part for the last time. She (Celia Johnson) tells him (Trevor Howard) “I will walk past here many more times, but not with you.”

I don’t know how often they changed advertising posters at stations in those days (1945) but for the bereft Laura’s immediate future, the message at the site she would be walking by would read “Holiday in Donegal”.

I suspect that, caught up in the emotion of the film, few viewers pay that poster much attention. Indeed every element in the film, apart from Laura and Alec’s relationship, is deliberately intended to be regular and unexciting and everyday, from the conversations in the waiting room, to Laura’s endearingly dull husband Fred doing the crossword.

(He searches for a clue. LAURA (with an effort): “Romance, I think – yes, I’m almost sure it is. ‘Huge cloudy symbols of a high romance’”

She is trapped in dullness, her little trips to town the high point of her week, her lonely lunch and cinema matinee. Until Alec.

The station scenes in the film was shot at Carnforth, in Lancashire. So we assume the poster for Donegal was already there.

Is Donegal intended to trigger something in the viewer’s mind? Did David Lean, the director, who controls everything on the screen, have a purpose with that poster. Hard to believe he didn’t notice it.

Was it meant to conjure up the idea of escape, long mind-emptying walks for Laura, as she tries to forget, along the wild Atlantic coast out there in the far north-west of the Irish Republic? Probably none of that. It just happened to be there. Ireland wasn’t so far away from Carnforth.

The fact remains that for 70 years Donegal, for anyone noticing it on the fifth or sixth viewing (which is when I finally spotted the poster, in the cinema recently), particularly in this excellent, pin-sharp restoration by the BFI National Archive, has been subliminally promoted in the most loved of all film romances.

People will be gripped by the scene for as long as cinema is part of our culture, I am sure, even if, as a social commentary, it refers to repressed, innocent, but essentially decent small town middle-class ways that seem ever more curious and quaint.

And the idea of County Donegal will still be there, a very relevant wild, wide and accessible holiday destination for our stressed and harassed times.