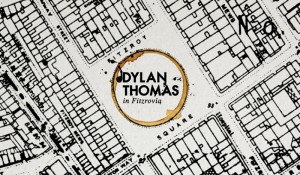 Celebrating a great poet in the heart of London

“The life, work and riotous pleasures of Dylan Thomas in Fitzrovia.” That was the title of a wide-ranging festival celebrating one of our greatest poets in 2014, his centenary year.

It was also a celebration of Fitzrovia, the culturally rich district which played an important part in his life in London.

The 19-year-old first came up on the train from Swansea to London’s Paddington Station in 1933. Within a year he had published his first book “18 Poems”, with an initial release of 250 copies. It immediately established him as a leading voice of his generation.

Dylan soon found the Fitzroy Tavern in Charlotte Street. It was the place to mix with writers, artists, actors and filmmakers.  One habitué, the artist Augustus John, called it ‘the Clapham Junction of the world’. TS Eliot and George Orwell might be spotted there.

This magnet for conversationalists and creators established its reputation in the 1930s as the place to drink and be stimulated. The area, north of Oxford Street, east of Marylebone High Street, south of Euston Road and west of Gower Street, became known as Fitzrovia.  Where else in the world is a central part of a city named after a pub?

Dylan found comfort and companionship in Fitzrovia. He wrote that London was the ‘city of the restless dead…which filled me with terror’. It could also be a place where ‘the arches of the bridges leap into light; the moon clocks glow, the river sings’.

London was his energy, his inspiration and his distraction. ‘When I do come to town, bang go my plans in a horrid alcoholic explosion that scatters all my good intentions’.

In Fitzrovia, at the Wheatsheaf pub in 1936, Dylan met his wife Caitlin. It was in this district where he did some of his best work for the BBC, for whom he wrote Under Milk Wood,  and where he made some of his most enduring friendships.

The 2014 festival director Jason Morell said: “Fitzrovia is an extraordinary place. It is what London should be, in its crammed mixture of small shops, pubs, galleries, restaurants, ad agencies, film production companies, architects, academic hothouses, communal housing and grand old mansions. Many of our big international businesses sprang out of and remain there. There is a danger of corporate homogenisation but the local community have fought back to make themselves heard and big business, I think, might be listening because they know what a special place it is. It is no-one’s interest to flatten an identity as unique as that.”

Fitzrovia features in my article on the locations in Dylan’s life.

“It all started with a romantic encounter to match the station café scene in Brief Encounter, where Trevor Howard  studied the smoke smut in Ceila Johnson’s eye and felt his heart leap.”

“In Oxford Street. I joined the shopping throng, then turned into quiet Rathbone Place. Just opposite the Post Office was the Wheatsheaf. Exposed wooden frame and age-stained glass hinted at history within.

“Was this really the setting for Dylan’s  smoke smut moment? The proof was in a framed study of the young, rascally Dylan, on the wall just behind a Spanish girl who sat caressing a glass of Chardonnay. An uncanny reprise of Caitlin when Dylan first spotted her, ‘seas of golden hair, two blue eyes’ through a smoky fog at possibly this exact spot in 1936.

“Did the bibulous scribe, already one of Britain’s best young poets, quit a typically garrulous conference with some assembled literati, stagger over to his goddess, collapse drunkenly in her lap and propose?  It depends who you believe.”

(Many of their favourite pubs survive. As well as the Wheatsheaf in Rathbone Place, Dylan and Caitlin were regulars in the French House, The Highlander and Pillars of Hercules in Soho, The George and The Stag’s Head in Portland Place, and the Fitzroy in Fitzrovia. A number display photos and cuttings.)