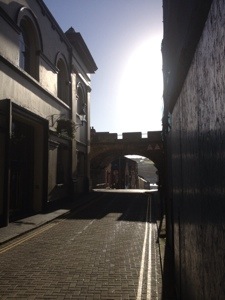 Derry~Londonderry is a fine destination for connoisseurs of the old European City. Its spectacular city walls (above) match any in Europe.

Derry~Londonderry ended its great year as the first UK City of Culture in 2013 as the venue for the announcement of the winner of the Turner Prize 2013.

All four short-listed artists were displayed in the city, the first time the award had left England. Appropriately for a city in peaceful transition, the works were shown in a former military barracks, only recently vacated by the British Army.

The prize was founded to celebrate new developments in contemporary art, and is awarded each year to a British artist under 50. Many commentators see the Turner as the world’s most prestigious award for contemporary art.

For Derry, ancient city on a hill above the River Foyle, near Northern Ireland’s north coast, this was the culmination of the year (2013) of its greatest triumph. It was also named a top ten world city to visit by Lonely Planet.

Peace came recently, and it is still setting roots. It’s fitting that the first and most striking thing you see when you arrive in the city is a snake of sinuous silver under two high spars, like lowered swords. The Peace Bridge was built in 2011 to span the River Foyle, join two quite distant banks and end years of division. The wide and fast-flowing river used to be just another barrier in this once-divided city.

The bridge, for cyclists and pedestrians only, serves as a symbolic handshake between the two banks. It’s a striking feature when lit up at night, and a good place for looking back at the city on the hill. It links directly to the former Ebrington Barracks, home to the British Army from the 1840s until 2004.

The barracks’ immense former parade ground, bigger than Trafalgar Square, is now open to the public. In 2013 the city unveiled the statue of the International Sailor here, a tribute to seamen lost in the Battle of the Atlantic. This city played an important wartime role. The protecting international fleets moored close by.
Derry is a fine destination for connoisseurs of the old European City. Its spectacular city walls match any in Europe, sharing that architectural distinction with York and Durham and Dubrovnik. One mile long, punctuated by the original four gateways, they enclose the old city, above elegant, refurbished Georgian terraces.

Inside the walls is a perfect example of a planned, townscape, designed and laid out by London craftsman. The link with the London guilds is more than a sentimental abstraction. Sent across in the early 1600s, they funded and built the heart of old Derry. This export of skills has no real parallel in the rest of the UK.

Inside the walls are Shipquay St, one of Britain’s steepest shopping streets, and Austins, which may be the world’s oldest department store, dating from 1830. Towering above all is St Columb’s Cathedral. Cecil Frances Alexander, who wrote Once in Royal David’s City and other famous hymns, was a bishop’s wife here.
Enormous progress has been made since the 1998 Good Friday Agreement to end the conflict between Catholic and Protestant communities. Yet it would be impossible to ignore the cities tortured past, nor should you.

The outstanding Tower Museum tells the story, from its start in the 1500s. Key players in the story are the City of London guilds, and the 13 Apprentice Boys, who closed the gates on James II, triggering the 105 day siege of 1688/89 and the civil rights activists of the 1960s.
The museum also tells the gripping story of the Spanish Armada ship Trinidad Valencera: wrecked in 1588 on the local coast, it was found in 1971. Many recovered items are on show.
As you move around Derry, you may want to recall one of the leading campaigners for UK City of Culture, poet Seamus Heaney,
He was born and raised in the city and sadly died in 2013. To coincide with the Turner Prize 2013 exhibition a selection of local artist Willie Doherty’s photographs and videos made on the streets of Derry~Londonderry and its surrounding hinterland, are on show at the City Factory until January 4 2014.
Derry is small, with many high vantage points. and from any of them you could look down on the site of a significant incident. From the city walls you can see the river, where the Royal Navy ships broke the Siege of 1689. Follow the walls and look down over the Bogside, where the Troubles began in 1968.
With peace comes a palpable upsurge in optimism. I was fortunate to have as my guide Martin McCrossan. He is an outstanding ambassador for his city. We stopped at the mural of 14 year old Annette McGavigan, shot dead in 1971. Can any hope come from such a place? I think it can. In 2008 this 30 foot high work was amended under a programme in which communities have been replacing divisive murals with more positive images: the gun’s barrel was symbolically broken, and the butterfly repainted in full colour as a sign of hope.
I stayed at the Everglades hotel in Derry, one of the suite of comfortable and spacious high-end hotels run by the Hastings group. Throughout the Troubles, Hastings Hotels upheld the tradition of warm Northern Irish hospitality, nowhere more so than in the much bombed Europa in central Belfast.
Just outside the city, the Everglades overlooks the Foyle, with views to the hills of Donegal. In the kitchen they follow the now common policy of sourcing ingredients locally. But they take it to a level I had never seen before.
At my table there was a booklet introducing the cheery producers who raise the cows, sheep, pigs, chickens, oats and tomatoes they use. I enjoyed the Guinness bread, handmade muesli and the yoghurt from cows on the Marchioness of Dufferin and Ava’s estate.

There are direct Ryanair are flights from London Stanstead
to Derry, and from other UK airports too. And alternative route to the city is on the very scenic railway from Belfast, if you include the city in a longer visit.
The last 45 minutes, in the direction of Derry, is enough to make the most jaded traveller’s spirits soar. Michael Pailin considers it one of the most beautiful in the world. You pass the gloriously golden, and empty, expanse of Benone Strand, open to the Atlantic and the pretty seaside village of Castlerock. Just inland is the formidable Binevenagh Mountain
The last dash to the city’s little Riverside Station is along the wide open banks of the river, then past Lough Foyle, base for the Allied fleets defending WW2 Atlantic convoys. Buses take passengers from the station into the city centre.

Gareth was a guest of the Northern Ireland Tourist Board,
www.discovernorthernireland.com and Hastings Hotels. www.hastingshotels.com. There are budget flights to Derry from a number of UK airports.