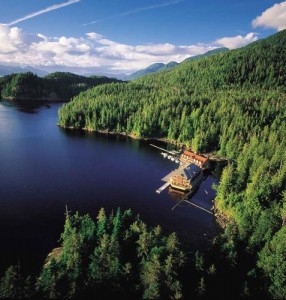 Now you see it, now you don't: King Pacific Lodge isn't even there in winter

Taking a long distance, expensive holiday can test your conscience. You worry about the Co2 emissions from the flight, about that big expensive hotel with all those staff and that enormous heating (or air conditioning) bill. Isn’t the best model for sustainable tourism a cosy little “staycation”  in your home country to which you travel by train or, if you want to be super-pure, bicycle?

If you apply that analysis without compromise, then a luxury resort on the edge of an uninhabited forest reserve on a pristine inlet in Pacific Canada ought to be the sort of place no committed eco-travellers would ever consider visiting, even if they could afford it.  How dare they build in, and pollute, such a precious place? And think of all those air miles.

Time was, and not so long ago, when you would have been right to draw that conclusion. But King Pacific Lodge seems to be a shining example of how prestige hotels are facing their environmental responsibilities. I say “seems” because,  in the interests of full disclosure, I must say that I haven’t been there.  My information comes from press releases by a PR company I trust, and a meeting with the  president of the lodge when he made a recent  visit to London. King Pacific Lodge appears to be setting a very good example, and it would be wrong to smother the message in too much cynicism.

The first remarkable thing to note is that from October to April this “luxury wilderness lodge” on the shore of Princess Royal Island in British Columbia isn’t even there. One of the first rules of sustainable development is that you “tread lightly”  on the land. The 17 bedroom King Pacific doesn’t even tread. It floats, anchored to the island’s shore about 380 miles north of Vancouver. and only in the summer months. In the winter it is holed up in a boat yard in Prince Rupert 120 miles away, where they tow it at the end of the season.

Maintenance work done, this 100 ft long 60 foot floating hotel with a wrap-around deck is towed back again. From 1 May until 24 September it is still the sort of place anybody with a lot of money who wants a holiday in high-end luxury accommodation, in an environment of perfect peace, enveloped in unsullied landscape and unspoiled nature on an island that has no permanent inhabitants or structures, would choose.

The features are routine for hotel of this price bracket: spa, jacuzzi and plunge pool, bathrooms with deep Osaka tubs, and “the ultimate in luxurious linens, towels and robes”. Much as clients with the appropriate budget would expect.

What sets the lodge apart is a commitment too few places are yet making, whatever their ramking on the luxury list. In 2007 it announced that it would halve its carbon footprint over the next five years. It has been trying to achieve this target using, for example, low energy laundry appliances, energy-efficient lighting, and low flush toilets. Floors have been finished and painted with environmentally friendly products. It has used local wood; guests and employees drink filtered glacial river water.

Other elements of the plan are installing a river-hydro plant and solar panels for energy, and using suppliers who conduct their own programme of carbon reduction.

What about the C02 dervied from transport to the lodge?  All the servicing is done by boat and by air. Clients are flown in, in about 3 hours, from Vancouver airport by light plane and then a floatplane to the lodge’s front door. King Pacific Lodge’s response is to offset the carbon emissions of guests’ air travel to and from the lodge, and that from employee travel and other lodge operations.

I met King Pacific Lodge president, Michael Uehara – the Japanese owned property is part of the Rosewood group – over tea in London. Uehara is a quiet, reflective man, hardly the conventional image of the environmental campaigner.  He didn’t even mention the carbon-reduction aspiration, which alone puts it well up the list of the planet’s greenest places to stay;  I found it in the press release.  Instead, he explained the core philosophy, the “triple bottom line”, that emphasizes a deep respect for the land, for the people of the land (the lodge works in partnership with the local First Nations’ Gitga’at community) “and an understanding that sustainable tourism in such a rare and special place can only flourish when guests from around the world share that same feeling”.

He explained the important part King Pacific had played to safeguard its environment from any development at all, throufh the creation of the Great Bear Rainforest, 21 million acres of the world’s largest expanse of intact temperate rainforest which includes Princess Royal Island. The area was given official protection in 2006, through the work of a coalition of native peoples, the British Columbian government and private enterprise, including King Pacific. The lodge continues to steward the rainforest in partnership with the local Gitga’at community.

Guests are given the chance to explore and apopreciate this precious habitat. Wilderness guides lead them on hikes, sea kayaking, beach combing, heli-hiking, whale watching, wildlife viewing and star gazing. Trackers give them the chance to see the rare cream coloured Kermode or Spirit Bear. They also offer cultural tours among the indigenous Gitga’at.

Again I must sress that I only have Michael Uehara’s word and that of  (see the website) some endorsing journalists in various articles. (In a wider travel sense, the resort has won high praise – named top resort in Canada in Condé Nast Traveler’s Readers’ Choice awards for four years running, and No. 16  in the world’s Top 100 Travel Experiences. However Condé Nast Traveler’s readers judged it against standard resort criteria—food/dining, location, overall design, rooms and service. There was no specific mention of ecology or environment.)

And there are awkward questions to be asked. Doesn’t any foothold, however slight, on such such a pristine habitat set a dangerous precedent?   Nobody can predict how this part of Pacific Canada will develop over the years, and less assiduous companies may well harm the very environment they seek to promote.

Let’s note, too, that the lodge sits in a very exclusive section of the holiday industry. A recent  all-inclusive  photography holiday there, where clients, taking wildlife photographs, were mentored by top photographers, cost around $14,000. Isn’t it easier for a place such as this to set ambitious, and potentially expensive, environmental targets?

However the lodge’s position at the top of the market does not mean that its “tread lightly” ethic cannot be be followed elsewhere. More and more developers want to build hotels and holiday complexes  on attractive pieces of coast, where varying degrees of protection apply,  and in many cases, where blind eyes are turned, around the world. They could learn a lot from the King Pacific vision, whatever their budgets.

Many travel brochures are filled with delicious prospectuses of splendid waterside  properties, built to high standards of comfort and luxury.  Yet there are many things they don’t tell you, about impact on the surrounding environment, where food and other products are sourced, where energy comes from. It is high time they followed King Pacific’s example.

There is another good reason for pleces such as this to set a good eco-example. Clients, by their very nature, are likely to include more decision makers and opinion leaders in their particular fields than the average guest list.

Even if they did not care much for the environment when they arrived, they can hardly fail to grasp the scale of the lodge’s  conservation ambition by the time they leave. Let’s hope they are inspired to take it away and carry it on.