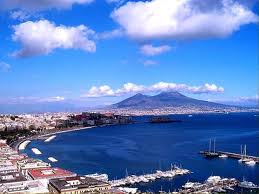 A visit I made to Naples in 2012. Since then fast trains have been introduced throughout Italy, making a direct train trip from the UK a sensible proposition. Details below.

Naples has  fabulous churches, palaces, galleries and ancient squares. It is set on the world’s greatest bay, and against one of its most exciting backdrops, the massive brooding cone of Vesuvius. Oh, and they invented pizza here.

This is one of the most authentic European cities I know. It contrives to be perfectly itself, fading, rundown, without even the benefit of internationally known retail chains to give most of its central streets some kind of bogus “respectability”.

Ah, say the people have never been here, isn’t it menacing? All that crime? We walked on several evenings through its darkest recesses, and felt no threat whatsoever. On a continent of increasingly uniform town and city centres, Naples, in all its glorious, threadbare muddle, under that enormous accumulation of history, stands out for being uncompromisingly itself.

On a walk through central Naples, I noted down some random, intriguing details. Such as the van delivering wood for the pizza ovens. The orange trees lining Via Sanfelice – with real oranges. Two massive castles, just a mile from narrow old streets as high as canyons, with washing fluttering miles above our heads, full of one-off shops selling Neapolitan cribs and other specialist items. Boys played football in bustling mediaeval squares. (You must take Norman Lewis’ book, Naples ’44, to help understand why unkempt old Naples is unlike any other city.)

We called at the opulent Gran Cafe Grambinus, on the edge of huge traffic-free square Piazza dell Plebiscite, for an espresso. It’s next to Italy’s oldest opera house, Teatro di San Carlo, and the great glass-roofed arcade Galleria Umberto. These places are as smart as anything in Rome, Milan or Turin.

As for history, in the National Archaeological Museum we came closer than anywhere to real Roman people. Many of the wall paintings from Pompeii and Herculaneum were moved here for safekeeping. Among the studies of gods, heroes, and fish, on that sumptuous deep red Pompeian background, are the very ordinary Mr and Mrs Paquius Proculus, peering nervously out at the artist.

There are many more finds from the buried towns, and a splendid supporting cast of Roman and Greek statues. It’s worth taking the bus on (buy the all day ticket, at tobacconists) to the Museum of Palazzo Capodimonte, in a former Bourbon palace on the top of the hill. There’s a fabulous collection of paintings by Raphael, Titian, Caravaggio and El Greco.

In the devout and crowded heart of old Naples we found what must be the richest concentration of churches in any European city. There are so many, and they are so big, you wonder there were saints enough to name them after, let alone the people to fill them. We wandered in and out of the gloriously named Santa Maria Maggiore alla Pietrasanta, Santa Caterina a Chiaia and many more (most are free), admiring sumptuous ceilings, far above our heads.

Artistic highlights include Donatello’s tomb in Sant’Angelo a Nilo, and Caravaggio’s Seven Works of Mercy, in Pio Monte della Misericordia. The baffling and beautiful Veiled Christ is in the chapel of Cappella Sansevero. Experts still don’t know how artist Sanmartino made the transparent veil out of marble.

Naples connects to the very soul of the pizza. In 2009 the EU awarded the Neapolitan pizza its Traditional Specialty label. A host of good family places serve it, on a base like a pastry quilt, cooked in wood-burning ovens. We liked the Fratelli La Bufala chain – try the one in Via Medina. We had an excellent meal in Taverna dell’Arte, booked by our hotel, up a flight of ancient steps, Rampe S.Giovanni. It’s tiny, and full of locals,  with  tables for two in cosy corners. They served the taste of the ancient Naples inn, (eg salt cod, Maruzzara beans). Ristorante Umberto, (via Albardieri) is a trattoria with happy red seats and local fare. La Scialuppa, via Borgo Marinari, is a busy fish restaurant under Castel dell’Ovo.

By all means visit Pompeii – 37 minutes by train. Well preserved temples, baths, theatres, and homes have been uncovered from the ash and pumice that poured out of Vesusius in AD 79. But Herculaneum is closer, 15 minutes from Central Station.

This small town was buried under 60 feet of liquid mud in the same eruption, and the buildings are more intact. Smaller and compact, it is an easier visit. You are free to wander the narrow roads and enter half-standing houses, with wall paintings and mosaic floors and charred wood. On the short walk back to the station, do visit the Virtual Herculaneum attraction. They digitally reconstruct the destroyed town and show what life there was like. This could become the way to “visit” fragile sites places, as tourist numbers grow. www.museomav.it

We stayed at the Romeo Hotel, on the epic Bay of Naples. Japanese architects and Italian designers combined to turn former shipping offices into a startling glass-fronted vision in blue. In the lobby they combine the calm of an open wood fire and a real waterfall, with designer furniture, antique armour and black granite floors. In the lift we admired a video of a manta ray. With a coffee from the espresso machine in our room, we took in that astounding view of a (non-smoking) Vesuvius – the very best view is from the rooftop infinity pool and spa. The staff were excellent. The hotel do their own city guidebook, with useful recommendations for eating out and shopping. It’s a five minute walk from Piazza Municipio – second stop on the airport bus. 0039 081 0175001.

BA fly regularly to Naples (from £49 one way), with flight and hotel deals.www.ba.com

By train to Naples:

The 09:22 Eurostar to Paris – then take the 14:42 high-speed TGV from Paris to Turin or Milan.  Stay overnight and continue to Naples next day by high-speed train.

Alternatively, an evening Eurostar from London to Paris, stay overnight in Paris then take a morning TGV from Paris to Turin, changing at Turin for a fast train to Naples.