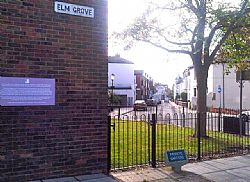 Another in my series of easy, post-lockdown trips to take in the UK.

Sir Arthur Conan Doyle set his Sherlock Holmes stories all over England, but you can follow the trail of both Doyle and Holmes, without leaving London. If you want to make one trip out of the capital, it has to be to Portsmouth – by train, of course, as Holmes would not have have travelled any other way.

(I was shortlisted for an English Tourist Board travel writing competition for this piece, which appeared originally in the Mail on Sunday.)

“Watson! The game is afoot! There is not a moment to lose. It’s a matter of utmost urgency  that we catch the 1.30 from Waterloo.’

“And what, my dear Holmes, is this very pressing matter to which you wish to attend?’

“It is, Watson, the Singular Case of the Portsmouth Doctor.’

As we rattled through the pretty Hampshire countryside, Holmes, seemingly unaware that smoking was now banned on trains, drew thoughtfully on his mahogany calabash pipe and outlined the details of the remarkable medic.

“The man known as the most famous Englishman of his day stood in goal for Portsmouth, played cricket for MCC and took the wicket of W.G. Grace with his first ball. This sporting all-rounder was an amateur boxer, had an unseemly interest in bare knuckle fighting, and mapped out ski runs in Switzerland. He was a crusader for justice and in his later years he even believed in fairies.”

The train pulled into Portsmouth Harbour Station, under the shadow of the Spinnaker Tower. “560 feet high”, noted my imaginary companion, adjusting his deerstalker hat, and fixing me with those piercing eyes.  “I see you have not yet deduced that the man we seek, Watson, is none other than Sir Arthur Conan Doyle. The man who created me and killed me off, only to bring me back by popular demand.  And this is where it started.”

At the Portsmouth Museum’s permanent (and free) exhibition they are too modest to claim it,  but this must be the world’s most comprehensive collection of books, photographs, posters and objects connected to Holmes and the life of his creator.

In 1882 the recently-trained and penniless Dr Conan Doyle arrived by boat from Plymouth. Within four years he had created one of the most famous characters in fiction, while still finding time  to play for the local football team.

Richard Lancelyn Green, lifetime student of Conan Doyle, bequeathed his enormous collection to Portsmouth on his death in 2004. I spent a happy hour turning up the unexpected and the plain crazy. I found an original Conan Doyle waistcoat, his boxing gloves, a Sherlock Holmes pub sign, lots of curly pipes, a Sherlock writing set, and  the Peanuts cartoon strip where Snoopy bets that the Hound of the Baskervilles was really a beagle. Posters and photos from 200 film and TV versions of the 60 novels and short stories feature Peter Cook and Dudley Moore among the many to play the Baker Street duo, along with Basil Rathbone, Jeremy Brett  and even Daffy Duck as Holmes.

Now for some detective work of my own, inspired by Stephen Fry, the Portsmouth collection’s patron, who wrote: “I would walk a mile in tight boots to read his letters to the milkman”. I set off, in comfy shoes, to 1 Bush Villas, Elm Grove, in adjoining Southsea, where Doyle created Holmes in idle moments between patients.

But the old house wasn’t there. A random rain of bombs fell on this naval port in the war; one took out the house where the great writer lived for seven years.  A plaque on a block of flats marks where it stood (photo above).

I followed Sir Arthur back to London, where he lived for 17 years, and where his own exploits were almost as remarkable as his creation’s.  Every true devotee will want to visit The Sherlock Holmes Museum at 221b Baker Street, for its convincingly-recreated Victorian interior of “the world’s most famous address”.

Nearby Lord’s cricket ground was the scene of some sterling performances by Sir Arthur on his occasional appearances for the MCC. But in 1900, his career at Lord’s  took a turn for the Rowan Atkinson, in the Curious Case of the Self-igniting Trousers.

A ball from one of the quickest bowlers in the country hit the good doctor on the thigh. A cursory rub did not relieve the sharp pain. Then the surrounding fielders saw flames sprouting from his flannels. The ball had struck a tin of matches in his pocket. The fire was quickly extinguished. It’s a pity Doyle never used the incident in a plot.

He set many adventures in the London streets he knew so well. You may link up the locations in dozens of self-guided walks: most end at a pub. Doylian imagination transformed many an innocuous road into a place of brooding menace. In Conduit Street, at the bottom of Regent Street  I half expect a tap on the shoulder from the “second most dangerous man in London”  (after Moriarty), Col. Sebastian Moran.

My one regret is that I couldn’t find the place where Watson received the following telegram: “Dining at Goldini’s Restaurant, Gloucester Road. Come at once. Bring  a jemmy, a lantern, a chisel, and a revolver.”

For Holmes and Watson, dashing to catch a train to the scene of some dastardly and baffling crime deep in the country went with the job. You can create your own awaydays to places where he lived or which he wove, under literary disguise, into the stories. My unofficial Conan Doyle trail zig-zags through Britain, from Picardy Place, Edinburgh, where there is a statue of Holmes close to Doyle’s birthplace, via Derbyshire, Dartmoor (Hound of the Baskervilles) and the South Downs. One last call is Doyle’s statue in Crowborough, Sussex, close to his last home. He is buried in the churchyard at Minstead in the New Forest, famous forever.