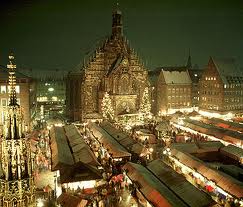 First and best of the Christmas markets?

“Particularly popular with visitors are Nuremberg’s Christkindlesmarkt and the Striezelmarkt in Dresden.

“Choose from more than 150 of the most beautiful Christmas markets in Germany. Click on the symbol on the map of Germany for a picture, opening times and a link for each market.”

Here is a random entry from the site:

“On Münsterplatz square, against the majestic backdrop of Ulm Minster, which has the tallest church tower in the world, more than 120 beautifully decorated stalls create a glittering festive atmosphere. There is something new every day, with real sheep in the stable, life-size Nativity scenes, a fairytale marquee and evocative events. Neu-Ulm steps back time too with a blacksmith’s workshop, candle making, archery, knife throwing and a wide variety of traditional crafts at the medieval Christmas market. Specific seasonal travel offers and special guided tours are also available.”

But my favourite is still Nuremberg.

This is my article.

On a late afternoon of nipping chill, in a city square in the heart of Europe, I found the antidote to brash, glitzy, overblown, commercial Christmas.

As the daylight ebbed, a cheerful glow pulsed up from the covered stalls of the Nuremberg Christmas Market (Christkindlmarkt),  crammed together in mediaeval tightness.

At 4 o’clock sharp, a choir of Nuremberg mastersingers took the stage in front of the Frauenkirche. Cue for a big contingent in smart coats to press forward and form a genteel Germanic scrum around the base of the stage. I stood back to listen, wrapping my fingers for maximum warming effect around a ceramic mug of gluhwein as the choir sang Hark the Herald Angels in English, with unaccompanied purity. Ancient decree prohibits aural competition among the stalls – no traders calls, no  music.

The stallholders are chosen from local merchants. They stand proud under painted name boards, selling toys and small seasonal ornaments that dangle and rustle in the raw wind, gold foil angels, straw stars, candles and diaphanous mobiles. One lady surveyed her wares from the small aperture high at the back of her stall. She was entirely framed by Zwetschgenmannlein, little prune and crêpe paper figures.

I bought Lebkuchen (spicy gingerbread), the deceptively dense and heavy Fruchtebrot (fruit bread), Stollen  and fruit tea (Fruchetee). Down every alley there was a family toiling over hot coals making the snacks that work to best effect on a cold evening.

The Wolf family served me Nuremberg sausages, Rostbratwurste. There were six on my plate, alongside a towering hunk of bread and a mound of sauerkraut.

This is the market of markets, the first and the best in Europe, the model for any city or town that wants to create a small enclave of tranquillity away from the seasonal shopping frenzy. This is Nuremberg’s Christmas Continuous, carrying on much as it has been since the Middle Ages.

The Christkindlmarkt (literally the Christchild’s market) had an unlikely patron. Martin Luther, father of Protestantism, initiated the custom of giving presents to children at Christmas instead of the New Year. Fixed in its season, the market proceeded serenely through the centuries. Hitler, recognizing a symbol of Germanic family values in the propaganda capital of his Reich, gave it his support.

Retribution came to Nuremberg on January 2, 1945, when Allied bombers destroyed 90% of the old town. The market reopened in 1948, a beacon of hope even as the war trials were proceeding a few streets away in the Hall of Justice.

There is live music on the Frauenkrirche stage on the hour, every hour – in a city whose name is contained in the title of the great opera, Die Meistersinger von Nuremberg, you would expect no less.

On my walk from the airport bus stop at the main station, through the traffic free streets, buskers defied 1° cold to spread a continuous pathway of sound.

On Konigstrasse four French horns boomed out a medley of carols. A man playing an antique metal fiddle reeled off yearning melodies. And, incongruous and stoical, the kilted Kenny Grant “aus Schottand”  rendered Brian Boru’s march on a tin whistle.

Hans Sachs, the extraordinarily 16th century cobbler, poet, playwright and master singer who is the hero of Wagner’s opera was everywhere: in statues, on chocolate box lids and ceramic plates. I even saw him in paintable model form, alongside soldiers of the Brandenburg Kurassier regiment.

Sachs’s poem Bittersweet Married Life is controversially set in lascivious sculpture as a fountain, depicting scenes from marital life – it was paid for from the levy which developers are required to spend on public art.

The image of Nuremberg’s other famous son, Albrecht Durer, was there on chocolate boxes too, but disappointingly not in the original paintings. This may have more to do with market forces then any neglect by today’s city fathers. I stayed at the Durer hotel, next door to his house. Today, as the Durer Museum, it contains only copies of the master’s works. For the originals, try the Prado or the Uffizi.

Save Nuremberg’s market for the fading day. The morning is the time to climb the ramparts and take in the city. Germany is an unlikely candidate for monarchical restoration, but if the king ever were to return, the Kaiserburg, the old imperial castle built on precipitous crags, is waiting.

The “old” city, rebuilt after the war much as it was, spread out before us, timbered houses with steep brown and red roofs enclosed by the three-mile long, 14th century city wall, with its 80 fortified towers and the tremendous bulwarks of four main gates. My guide, a Germanophile American named Sally, extended an arm over this feelgood city, comfortable and humane in its proportions. She made no attempt to divert my eye from the complex of buildings representing a mighty evil a few miles to the south-east.

Medieval Nuremberg held a powerful fascination for the Nazis and the first of the great Nazi rallies was held here in 1927. I’m surprised that the physical remains of Hitler’s propaganda machine are still there. But perhaps there is a point to leaving the unfinished Congress Hall, the Main Stand, Zeppelinfeld parade ground and colossal Grosse Strasse, 60 m wide and 2 km long (it is now a car park), as mute witnesses to Nazi megalomania.

Sally led me down into the old town. We crossed the river Pegnitz  on Germany’s 1st suspension bridge, and passed the house where Kaspar Hauser briefly lived after he was found, so it was claimed, living wild in the forest in the early years of the 19th century.

The Toy Museum displays what may be the original Meccano set, developed by local toy manufacturers.

Nuremberg has two fine high Gothic churches, St Lorenz and St Sebaldus, close together and similar. This was a free city and one of Europe’s first civic democracies, so the citizenry saw no reason to smash up the   creations of the Reformation. The church treasures were hidden before the bombers struck. Most of St Lorenz was destroyed.

Outside the 19th-century German National Museum is the Way of Human Rights, by the Israelis sculptor Dani Karavan. It struck me as an eloquent response to the Nuremberg laws, and other outrages perpetrated in the city’s name. 30 pillers and a tree stand in a row: each pillar represents a nation where human rights have been, or are being, violated (the leaves of the tree stand for the nations left out), and each is inscribed with one of the 30 articles of the UN Declaration on Human Rights.

I decided to send myself forth into the Christmas season with a last visit to the market. Old Kings Street before French horns were still playing lustily. Their rpid ornamented Baroque music was clearly meant to keep you warm.  A trombone ensemble played Angels from the  Realms of  Glory.  And  in the Christmas card artist’s fantasy  fulfilled, a single snowflake brushed  gently against my cheek.