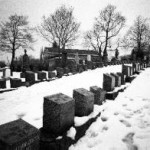 Barren trees and an eerie silence pervade the snowy wastes at Fairview Cemetery in Halifax. The cemetery manager adorns the grave of an unknown child with flowers

Three ranks of neat black granite headstones protrude to knee height through the snow. Each stone is etched with the same date, April 15, 1912. The only sound in this hillside cemetery in Halifax, Nova Scotia, is the growl of a diesel loco in the nearby rail freight yard, but I sense I am in the company of millions, the vast audience of cinemagoers around the world who grieved for the fictional incarnations of the real people buried around me.

The bodies of 1,100 victims of the Titanic were never recovered. But for those that were, this friendly Canadian port, 700 miles west of the point where the “unsinkable” White Star liner sank, is their resting place – 150 people, mainly third-class passengers and crew, were interred in three cemeteries in the city.

Titanic the movie cannot possibly have a sequel, but in Halifax, on Canada’s east coast, where director James Cameron shot much of his film, it does have a physical postscript. The city holds the world’s best collection of Titanic exhibits – including the original of heroine Rose’s “life raft”, and our century’s finest metaphor for futile tinkering while fate looms: the only complete Titanic deckchair.

Three Halifax vessels, the Mackay-Bennett, Minia and Montmagny, were despatched by the White Star company and picked up 327 bodies. The lack of refrigeration equipment on these ships, and the delay in finding many corpses meant that they were so decomposed they had to be buried at sea. The remaining 209 were landed at Quay 1 and met by embalmers from all over Canada’s maritime provinces. First-class passengers, such as Jacob Astor, were taken away by their families for interment but most of the third-class passengers and crew, alone and unknown, were buried in the Fairview Cemetery.

The cemetery is about two miles out of the centre of this hilly, leafy, cheerful city, on land that slopes gently down to the world’s biggest natural harbour after Sydney’s. A single flower has been placed on the headstone of each of the Titanic victims.

I read the roll call of names so spectacularly raised from obscurity: Luigi Gatti, Simon Sather, Malcolm Johnson, M. de Zacarian. Even now some graves are identified only by a number.

The grave of 29-year-old Alma Palsson and her four children, aged two to eight, rather demolishes the “women and children first” myth – in the event, a greater proportion of first-class men survived the sinking than third-class children. The cemetery manager reserves his special devotion for the stone of “an unknown child”, which he keeps constantly adorned with a wreath.

My guide, David Flemming, a retired custodian of the Maritime Museum, has shown many people around, including Walter Lord, author of A Night to Remember. His most moving story concerns a visit to the Jewish cemetery, just a few yards up the slope, by Michel Navratil.

He had come to see the grave of a certain Mr Hoffman, buried with the loaded revolver he carried when his body was recovered from the sea. Hoffman was not his real name. He, too, was a Navratil. He had kidnapped his sons Edmond and Michel and was escaping to America on the Titanic. He managed to place his sons in a lifeboat, but perished himself. The sons were later reunited with their mother.

The cemetery is a dignified, understated place; there is only a single, simple sign that reads “Titanic Victims”. Mrs Palsson and her children can rest in peace; their graves and the others will be tended forever through a fund set up by White Star, and now administered by the city. On the way back to the centre of town, you pass the two high bridges over the narrows in the hourglass-shaped bay and the Hydrostone, a model estate built to rehouse those who lost their homes in the city’s own disaster. On Dec. 6, 1917, the Mont Blanc collided with the Imo as a munitions convoy prepared to leave Halifax for the European battlefields of World War One,  blew up and killed 2,000. It was the biggest man-made explosion before Hiroshima.

On the waterfront – close to Pier 21, where a million and a half European immigrants first set foot in North America – the Maritime Museum of the Atlantic houses the world’s collection of wooden artifacts from Titanic. It is a well-presented collection of displays, photographs and artefacts from the ship, recalling transient luxury, technological calamity and folie de grandeur.

The centrepiece is the glass case with the surviving Titanic deckchair. It served as someone’s life raft, was picked up by the Minia and presented to the minister on board who conducted many of the sea burials. Only the wickerwork needed to be restored when, recently, his family gave it to the museum.

The biggest piece of ship on display is a couple of yards of panelling, lavishly carved with musical instruments and a Louis XV-style scroll. If you have seen the film you will know that Rose, the character played by Kate Winslet, separated from Leonardo DiCaprio, clings to a replica of this fragment in the sea.

It came from the archway over the forward entrance to the first class lounge, which was in the area where the hull split, so its contents were thrown into the sea instead of plunging to the seabed inside the hull.

A newel post from the first class grand staircase, cut from English oak and carved with a vegetable, fruit and flower design, was also copied for the film.

There is a poignancy in the sheer randomness of the exhibits here: a log of the distress calls, a pair of gloves which belonged to the drowned railway millionaire Charles Hays and, most ironic of all, a poster advertising the Titanic‘s return trip from New York.

The terrible scene in Cameron’s film, of the liner spearing down into the depths, is captured here in an illuminated diorama: the ship is shown, stern high and lights ablaze, as if seen from a lifeboat. Even the stars are positioned exactly as they were that night.

The most arresting item, however, is the final photograph, which was taken from the quayside when Titanic docked at Queenstown in Ireland. We see Captain Smith, just his eyes and some beard, peering severely down at the photographer directly below.

I walked out through the shop. The crowds have already cleared out almost all the Titanic memorabilia, but a few items were left: a paper build-your-own Titanic, a book on Titanic cuisine, and a tape of the music played on board: fripperies like Oh, you Beautiful Doll, Alexander’s Ragtime Band and Maple Leaf Rag. The last number is Nearer My God to Thee.