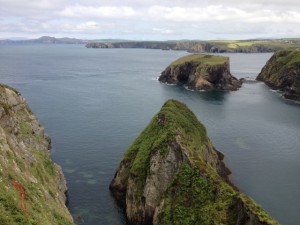 View from the Pembrokeshire Coast Path

The eye was piercing. The gaze was imperious. The message an unspoken “Do you know who’s in control around here?” Eventually, of course, the human in boots, inching forward as quietly as he could along the Pembrokeshire Coast Path, prevailed over the haughty feathered hunter perched on a fence post.

I was no more than 15 feet away, with the summit of nearby Carn Llidi as a magnificent backdrop, when the sparrowhawk very reluctantly gave way. It lifted off and, after a few grudging wing beats, alighted again about six posts along.

In the space of ten minutes, as I moved slowly forward, it repeated this procedure, lift off, lazy flutter of wings and perch again, about fives times, before cutting back in a wide arc across the field to roughly where I first met it.

The guidebooks tell you to look over the cliffs for seals, for porpoises, dolphins and choughs, those comical blackbird-size birds with red legs. But not a word about this piece of natural theatre, a top predator which has clearly dined so well on the local singbirds that it scarcely needs to move. (The birds sang on, despite the predations.) (Click here for some photos.)

Approach this national trail as you might a long, very detailed menu in a restaurant, one with a wide choice of starters, many of them a meal in itself. There are also some main courses, specialities of this county – I’ll come to them shortly – and you will want to sample one or two of them. However you would need a giant’s appetite to consume the whole 186-miles, still less the entire 870 miles Wales Coast Path, of which this is only a section.

Let’s start with those appetizers. (Obliging photo subjects like sparrow hawks would be in the “today’s specials” section.) I stayed at the county’s western end, where it thrusts out towards Ireland. As the crow flies, Waterford is closer than Cardiff.

On this part of the coast any three to five mile stretch contains many permutations. The trail twists, it lurches, it plunges, it turns severely back on itself then climbs steeply down into and up out of tiny coves. Little tumbling streams cross your path. Banks dense with foxgloves line your way. A flower strewn meadow ends in a sudden sheer drop down to waves boiling over jagged rocks. The view constantly changes. Nothing stays the same on this path for more than a few minutes.

I did an idle measurement on Google Maps afterwards. Made into a straight line the Pembrokeshire Path would stretch to within 12 miles of my home, just north of London, 198 miles away. No wonder, in 2010, National Geographic Magazine judged this the second best coastal destination in the world, just behind the Avalon Peninsula in Newfoundland, Canada.

Every three or four miles, over much of the western end at least, there is a convenient pause, in the shape of an attractive little harbour, and there’s a fair chance it is served by the coastal bus.

This part of the coast was bristling with unexpected, at least to me, industrial history. We think of the Welsh valleys studded with smokestacks and pit heads, but there is the evidence of long and serious industry in this quiet backwater. The clues that somewhere, such as Abereiddi, was once very busy is in the eroded remains of labourers’ cottages. In other places those that stood up long enough after the decline are now holiday cottages.

We dropped down into Porthgain, clearly an industrial powerhouse  in its day. The roads of England were paved with crushed dolerite processed here. Now gentrification is complete. The main industrial building is now the Shed Fish and Chip Bistro. On our visit no fewer than ten Norwegian-registered vintage MG sportscars were neatly parked on the quayside.

The drivers and passengers were in the Shed, where they may well have been enjoying the exquisite if expensive fresh crab sandwiches, sold at prices Chiswick visitors would recognize (£8). We ordered the same at the Sloop Inn opposite. We were perfectly positioned, some time later, to see the MGs set off in orderly convoy on the road to Fishguard.

The coast continues like this for miles, with a spot of strenuous striding, frequent heart-lifting views, tantalising glimpses of islands big and small just off the coast. Here and there an encounter with a deeply religious past, in the ruined chapel and well of St David’s mother St Non, for example.

There are other, bigger harbours. In Solva the man in the car park hands out leadflets promoting all the little art craft shops, restaurants and guest houses. The Dutch and German cars underline the county’s appeal to a discerning international market – the drivers were not here for the weather.

And so to those landscape “main courses” I mentioned. On the path from the lifeboat station at St Justinians, heading north, I am suddenly above a wide, flat,  sandy beach where somebody had expertly drawn a vast jellyfish, so big it could only be seen to proper effect from 200 yards up, on the footpath.

Pembrokeshire’s beaches are now an international hot property.  Hollywood could have chosen some enchanted strand on Bali or Hawaii as the location where Kristen Stewart thunders through the surf with 80 muscular extras on horseback in the 2012 movie ”Snow White and the Huntsman”. Instead the studios chose the wide, flat, golden film-star sands, perfectly smoothed by the outgoing tide, of Marloes Sands, on southern Pembrokeshire, even if they did computer-generate an extravagant outburst of fairy-tale towers on the conveniently flat-topped Gateholm Island, which stands just yards off the headland.

Marloes first broke into the movies in 1967 when The  Lion in Winter was filmed here. Whitesands was used in the recent BBC4 Richard II. In 2010 Hollywood came to another Pembrokeshire beach, Freshwater West. Ridley Scott had filmed Robin Hood there, with Russell Crowe. The filmmakers built higgledy-piggledy Shell Cottage there for Harry Potter and the Deathly Hallows. The beach is clearly visible in the film. You will find no trace that the scrupulously tidy film makers were ever there. It’s the same at Marloes, left just as they found it.

You could easily construct a week or ten day holday around this sublime coastland, mixing up walks with boat trips to Skomer or Ramsey, dining out in the many harbour pubs on fresh local fish. The coast path has been conveniently cut up into 200 bite-size local walks, some of them circular.

One took us a few miles inland to St Davids, which is Britain’s smallest city, by virtue of the cathedral. We arrived early to benefit from its remoteness. Most day trippers, coming from afar, don’t get there until well on in the morning. We came across the intimate little cathedral, nestling in a green valley, well before the throng.

In the nave we had plently of room for some entry-level surveying, measuring the startling incline on the spirit level app on my daughter’s smartphone. It is almost two degrees.

St David’s has an understated nobility, because of its size and unusual position. On a scale of conspicuous cathedrals, Lincoln would be a 10. St David’s would be a 1. It was a steep climb up to the city, in reality a pleasant little town, where we gave in to the Italian charms of  the Bench cafe for coffee and ice cream.

Until the early 1800s Pembrokeshire would have been as remote by land as some European cities were for a traveler starting out from London. Railways opened the county up, and oil at Milford Haven and the Irish boat traffic through Fishguard Harbour ensured the rail links survived even in the bleak post-Beeching era.

The trains helped build Tenby into as gracious a Victorian resort as Whitby or Ilfracombe. Novelist George Eliot was inspired enough by her visit to this perfect little resort in 1856 to take up writing. It has been a destination of rare distinction ever since.

A cordon of high, narrow Georgian and Victorian town houses in delicate pastel colours still wraps around Tenby’s sea front. To dodge the wind you either head to the sandy beach on the town’s north flank, or, if it’s blowing from the other direction, seek out the little harbour to the south.

Praise, then, for Arriva Trains’ very frequent services direct from Manchester deep into Pembrokeshire, connecting with services from London and the west and south.

It’s still the case, of course, that most visitors drive here. They will find the car necessary for visiting the centre of the county where the excellent bus service doesn’t reach.

Pembroke, is technically on the coast. The tide probes almost under the walls of the castle where  Henry Tudor, who became Henry VII, was born in 1457, (It was restored to its formidable Norman pomp after a crumbly, ivy-covered interlude in the 1900s.) But it feels like an inland town.

The castle, proud and imposing above this ancient town, is just one the county’s rich crop of citadels, The list includes Manorbier, Cilgerran, Haverfordwest, Lamphey, Llawhaden, and Picton castles. There are over 50 all told, if you include forts and the reconstructed 600 BC Iron Age citadel Castell Henllys. Leading the list is Carew Castle. It overlooks a serene millpond, with a 11th century Celtic Cross and Wales’s only restored Tidal Mill. Narberth is another appealing little castle town. If you buy Welsh cakes in waitrose and other big supmarkets, they come from here.

Close to Narberth is the secluded Grove, one of the best boutique hotels in West Wales, and now working hard to establish itself as one of the best restaurants in Wales. Hotels use to sell themselves on often hard-to-prove claims that Charles II or Queen Victoria slept there. Today having real stars to stay bestows an authentic kudos. Recent guests include Kristen Stewart and other Snow Whiters.

Without local knowledge I doubt that the paparazzi would be able to find it. The Grove is tucked away down a quiet valley with a glorious view over to the Preseli Mountains, the county’s remote heart, where they found the stones for Stonehenge,  just a few miles to the north.

They are an unusually high and imposing feature in the otherwise benign West Wales landscape. The evidence is accumulating that the blue stones for Stonehenge came from these hills, and the likeliest places are now Carn Menyn, Carngoedog, Carnbreseb, Cerrigmarchogion among other sites.

I took the train back to London trying to resolve the enduring debate: Pembrokeshire or Cornwall? Which is better? Unanswerable, of course, but looking objectively, and its never easy to do that after an anjoyable short break somewhere, Pembrokeshire does have a long distance trail all to itself, and the only national park in southern Britain named after a county.

I think the beaches could swing things in Pembrokeshire’s favour. For many years to come people will replay Snow White and Harry Potter and ask themselves. “Now, where is that amazing sand? I want to go there.”