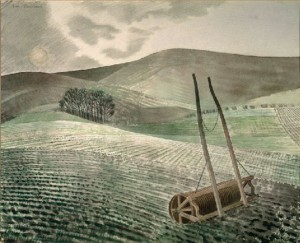 Downs In Winter – Eric Ravilious,1934. The artist’s works are in the Towner Gallery, Eastbourne

The exhibition, based on fresh research, tells a previously-untold story. It coincides with the 75th anniversary of the death of the artist and designer Eric Ravilious (1903-1942). It explores the relationships and working collaborations between Ravilious and a group of friends and affiliates, including Paul and John Nash.

Many of Ravilious’ key works will be on show alongside works by his contemporaries, some of which are being exhibited publicly for the first time. The exhibition will focus on key moments when the work and careers of these artists coincided, overlapped or was particularly pertinent to the others, such as their time at the Royal College of Art, their days in Sussex, and their various roles in the Second World War.

A big banner at the railway station proclaims: “Welcome to Eastbourne, Sunshine Coast”. What’s the truth in this? Recent weather data suggests the town’s spin doctors may have a point.

Eastbourne is indeed one of the sunniest places on mainland Britain. Situation is everything. The town enjoys a rare microclimate, sheltered from the north and west winds by Beachy Head and the South Downs. So often it basks under clear blue skies when it’s grey and damp just minutes inland.

The sun certainly shone on my visit to this well planned Victorian seaside resort, although no longer Sleepy and Staid on Sea. I took the train, a tolerable 90 minutes from London, with stirring views of the South Downs on the way in. It’s an easy 10 minutes walk down leafy roads to the promenade, which stood in for its racier near-neighbour in location shots for the remake of the 1947 film classic Brighton Rock.

It’s a comfortable stroll around the grand old features. I headed north to the Old Town, through wide and stately brick pavement streets to Motcombe Gardens and Hampden Park, both pleasant picnic spots. On, via Avenue Snacks, the half timbered black and white kiosk on the edge of the park at Uppertown Gardens, then back down to the 1872 pier, for views across to the elegant seafront.  No time for the 45 minute boat trip to Beachy Head, but I made it to the Bandstand, a famous old symbol of open air music-making under a handsome blue domed roof. It was built in 1935 to a unique semi-circular design (room for 1,600).  Finally to the tiny lifeboat Museum, for an exhibition of their biggest rescue dramas.

The town sits on the edge of Britain’s latest national park. The South Downs National Park came into being in 2011. The uplifting stretch of high rolling hills, its short chalk downland turf a mass of wild flowers and fluttering butterflies, runs 70 miles from Winchester to the western edge of Eastbourne. Its status sets it apart as a treasured landscape and wildlife habitat, an intricate mosaic of woodland, heath and downs.

It’s an easy walk west along the prom to pick up the South Downs National Trail to the nearby white chalk cliffs of Beachy Head. Or you could take buses 13 or 12 from outside Eastbourne station to the entrance of Seven Sisters Country Park at Seaford. It’s three miles to the “Sisters”,  where the South Downs meet the sea. The familiar seven cliff peaks were made by ancient rivers cleaving valleys into the chalk. I took the optional extra, the walk up the blissful meanders of the Cuckmere River to the pretty village of Alfriston.

Conclusive proof that Eastbourne has updated its image comes in the Towner Gallery, all tall windows, brilliant white walls and elegant curves to match the contours of the South Downs, clearly visible behind. It is billed as the the contemporary art museum for South East England. Opened in 2009, this Royal Institute of British Architects 2010 award-winner is the work of Rick Mather Architects, who did the recent renovation of Oxford’s Ashmolean Museum. Fittingly in this sunshine town, the light floods in to reach nearly every corner.

The Towner Collection is best known for its modern British art – including the largest and most significant body of work by Eric Ravilious, best known for his wide and airy depictions of the South Downs.  Towner is the centre for study and display of Ravilious’s work.

There are paintings, sculptures and photographs from the previous Towner Gallery’s collection, with works by Picasso, Henry Moore and Vanessa Bell (one of the Bloomsbury Set who live in nearby Firle). There are wonderful views of the South Downs from the second-floor cafe.

Eastbourne stopped being mistaken for Sleepy and Staid on Sea some time ago. Tough guys and gals flock from all over to Eastbourne Extreme, held in July, “one of the biggest FREE extreme sports festivals in the UK”. It includes street surfing, zero gravity  biking, spray watersports, and something called  “extreme master blasters”.

The town celebrates Airborne, the Eastbourne International Airshow in August. In quiet contrast there is Devonshire Park Theatre,  one of the best examples of  a small Victorian theatre in the country, with an ornate interior featuring decorative plaster work with scrolls and caryatids. Devonshire Park is a Grade II listed building designed by Henry Currey, built in 1884 and further improved by celebrated Theatre Architect Frank Matcham in 1903.

Next-door are the graceful Devonshire Park grass tennis courts. They host six major tennis tournaments a year. As for food, the choice ranges from traditional Victorian tearooms on the pier, to the Flamenco Tapas bar in Cornfield Terrace.

If you’re in town for longer than a day trip  — and a wide choice of accommodation starts with the literally dazzling all-white Grand, the only five-star hotel on the English seashore (www.grandeastbourne.com) — one excursion I would suggest is the short trip to 1066 Country. It’s 30 minutes on the train to Hastings, with optional stops at Pevensey where William the Conqueror came ashore. From here the 1066 walk continues to Battle (trains run there direct from Hastings) the site of the most pivotal clash on British soil. I took the audio tour for the one mile walk around the battlefield. Lusty whoops and yells from the school sports mingled with the whizzing arrows and neighing horses in my commentary.  www.english-heritage.org.uk