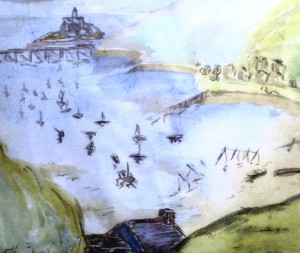 A shorter version of this piece appeared in the Mail on Sunday, May 18, 2014.

The helpful app on my smartphone treats my request as just another random A to B walking route. Those navigational algorithms may be clever, but the Muse is missing.

Without any comment, Google delivers me 5 Cwmdonkin Drive to Swansea Grammar School. Don’t they know back in Santa Clara, California, that this must be one of the most inspirational walks in 20th Century poetry?

Wordsworth had the Lakes District, Byron the Alps. Dylan Thomas walked – or more likely crept “like snail unwillingly” to school in true Seven Ages of Man mode – his own high route, the three quarters of a mile along Terrace Road. He must have done it thousands of times.

Who knows what lines turned in his head, behind that cherubic face, under that “curly mousebrown hair”. But within a few years of leaving the school he attended from 1925 to 1931, passing only English, Dylan was recognized as one of Britain’s leading poets.

He would go on to write one of the 50 most quoted lines in English verse (against tough competition from Shakespeare, Keats, and Tennyson), “Do not go gentle into that good night”.

Midway along Terrace Road I pause to look down over the new Swansea, to the glorious sweep of the bay Dylan would have known so well, and on to Mumbles. Down there are the old haunts of the brilliant, exasperating and ultimately tragic son of Swansea. He would wander his “ugly lovely town” (it became a city in 1969) in search of conviviality and conversation, until he left for London at the age of 20.

Few cities in Britain are so imbued with the memory of a writer. You could list D.H. Lawrence in Nottingham, J.K. Rowling and Alexander McCall Smith in Edinburgh, Dickens in Portsmouth, and Colin Dexter in Oxford. But Swansea is the beat of a man who, briefly, was everwhere in the town. Perhaps only Dublin can match it, so closely associated with James Joyce.

2014 is the centenary of his birth, marked by the Dylan Thomas 100 Festival. The organizers have succeeded in spreading the Dylanathon around the world, celebrating the peregrinations of the footloose scribe and his wife Caitlin. His achievement as lyrical poet, writer of short stories, scripts for radio, plays and films, is being marked with readings, theatre performances, music, exhibitions and a film, with Tom Hollander playing the poet, throughout the year until the anniversary of his death in November 1953.

London is bursting with Dylan and Caitlin connections, in pubs from Camden to Chelsea frequented by the tempestuous couple. You can follow his trail from their home in Newquay in Pembrokeshire, via Penzance, where the couple were married, to South Leigh in Oxfordshire where Dylan wrote part of Under Milk Wood, and to Oxford itself. And there is New York, where he died after a drinking session in the White Horse tavern.

It is in Swansea, though, where his story is anchored. “This sea-town was my world.” I was privileged to walk around it with his granddaughter Hannah Ellis, patron of the Dylan Thomas 100 festival, and Dylan expert Jeff Towns. Jeff knows practically every street the writer ever crossed, on his way to every pub whose bar he propped up in garrulous conversation.

We met close to the now condemned Bush Hotel in High Street, where Dylan took his last drink before his last train to London, and on to New York. Much of the centre was destroyed in the Blitz in 1941, but Jeff finds enough original Swansea to paint his picture.

We walked down Salubrious Passage, where a mischievous schoolboy Dylan would drop coins heated on a Bunsen burner, and watch passers-by pick them up and throw them down with a yelp. We saw the offices of the newspaper where he worked as a reporter, and the BBC studio where that rich stentorian voice would boom at the microphone in many a live broadcast. And the former Swansea School of Art where the platinum-tongued lothario chatted up my mother, a student there.

One of the least changed locations is Waterstones bookshop in Oxford Street. This used to be the Carlton Cinema. Dylan knew it well. It still has the original ornate staircase in what was the foyer.

The Kardomah Cafe, where he spent so many teenage days with his friends, was destroyed in the Blitz. We called in at the “new” Kardomah in Portland St, now historic in itself, for a pot of tea and a custard slice.

If there is a shrine to the poet, it is surely 5 Cwmdonkin Drive. Thomas was born here, up the steep “chilly, glinting hill” in ”A Child’s Christmas in Wales”, which is set here, even if he never said so. In this house he wrote half his poetry, including the famous lines of “And death shall have no dominion”.

A local couple restored the house to replicate the exact look of 1914. It’s now a bed and breakfast, open to visitors, and a base for Dylan-themed tours. Prince Charles called for tea in 2012.

Another way I like to follow Thomas is through his short stories, as a complement to the excellent downloadable walks – there’s even one to Dylan sites in New York. Some lead the questing visitor around Swansea itself. The Followers includes a call at one of the city’s oldest pubs, the No Sign in Wind Street.

My favorite is The Outing. A group of men set off by charabanc to nearby Porthcawl. With so many pub stops on the way, they never make it. Rhossili, at the end of the glorious Gower peninsula, is the setting for two short stories. Worm’s Head, where Dylan was marooned by the tide, is hard by.

It’s a sad fact that Swansea, in his day, and after it, never fully accepted the bibulous, flirting scribe, whose behaviour was quite moderate by today’s standards.

The world is more forgiving. The Dylan Thomas Centre, with its exhibition on his life and work, is in Swansea’s Maritime Quarter. Ex US President Jimmy Carter, no less, opened it. Peter Blake put Dylan on the most famous of all record covers, the Beatles’ Sgt. Pepper’s Lonely Hearts Club Band in 1967.

An edgy establishment gave him full recognition in 1982, when a plaque to Thomas was unveiled in Poets’ Corner in Westminster Abbey, between memorials to Lord Byron and George Eliot.

Where, in his short life, might we say Dylan was truly happy? Start with Fern Hill Farm, near Llangain, where he stayed as a young boy. Set amongst the soft, verdant Carmarthenshire hills, it gave its name to “Fern Hill”, where he was “green and carefree, famous among the barns”. This is the poem the Prince of Wales read on Radio 4 in 2013.

His last address, the “seashaken house on a breakneck of rocks”, the Boat House in Laugharne, 30 miles north of Swansea, qualifies, too. Here Dylan wrote “Do Not Go Gentle”, before leaving for that final, fatal, reading tour of the USA in 1953.

But it’s back to Swansea for another of his – and my – favourite places, and not a stop on too many tours. It’s the serene calm of the St Helens cricket ground, where the poet, close friends with eloquent commentator John Arlott, spent many a contented summer afternoon watching Glamorgan.

For more information on Dylan Thomas 2014 and Dylan in Swansea: