This  elegant  Pacific  coast resort is the antidote to big city stress in nearby  Los  Angeles.  The  breezes blow pure and cool off the Pacific, the sunsets  are  spectacular and – can you believe – people actually walk. 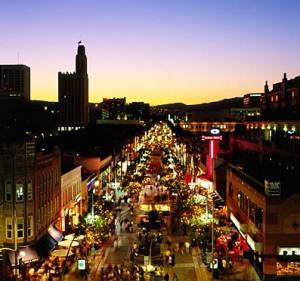 I find the best bits of the California lifestyle packed into Santa Monica –
just  16  miles  from LA airport, and a short limo hop from Hollywood – and
lists his six top draws.

Nobody  loves a pier as much as we British, but Santa Monicans come close.
The  city’s  pier  is  a survivor of the halcyon days of California seaside
fun.

They marked its centenary last year (2009) with a big bash, then made
it  the  official  western end of Route 66, the historic road from Chicago.
Walk  the  pier  before  breakfast,  and  it’s only you and a few fishermen
casting  into the glass-calm Pacific. During the day see the under-the-pier
sea  life  in  the  Aquarium,  fighting  hard  to  clean  up  local  waters
(www.healthebay.org). Go in the evening for full throttle fun. The carousel
was  filmed  in The Sting. The wondrous Ferris Wheel, lit with solar power,
gives the best view in town.

Third Street is a key piece in Santa Monica’s revival. In 1989 they shut a
shabby  three-block stretch to traffic, and created one of the West Coast’s
most stylish city strolls. The Third Street Promenade is paved in hexagonal
tiles,  “guarded” at each end by topiary dinosaur fountains and filled with
trees,  flowers  and street performers. Web sites list the latest Hollywood
stars  seen  there  for  the  shopping,  restaurants and cinemas. The Third
Street Historic District boasts 38 fine old houses (built 1875-1935).
On  Wednesday  and  Saturday the city’s main farmers’ market fills several
blocks. Go early and you may spot top chefs buying up the heirloom tomatoes
and  purple  asparagus for the day’s menus. They look after their own here.
All produce on the market must be California grown.

Once  the  car  was king in the Los Angeles area. Nobody walked. Ever. But
big changes are, literally, afoot. The new Santa Monica Mountains Ridgeline
Trail  is  the biggest triumph yet for two feet. It curls through the peaks
beyond  the  city for about 60 miles, with many splendid views. They cut it
up  into  easily  walked  sections  –  see  the  excellent  online  map  on
www.nps.gov/samo.  It  begins  three miles north of the city in Will Rogers
State  Historic  Park, set up around the 1930s film star’s ranch. There are
short  strolls here, and polo on summer weekends. In nearby Temescal Canyon
a  four  mile  trail  takes  in woods and a waterfall, with more fine ocean
views   from   on   high.   (No.  9  bus  runs  close  –  day  pass  $2.50,
www.bigbluebus.com. Connects to LA Airport too).

It’s  the  wonder of the West Coast, the sun dipping into the Pacific in a
golden blur. You can see it from Santa Monica, on average, 340 days a year.
But  the  window  sunset  seats in the bars and restaurants along the beach
still  fill  fast.  Try  booking  in  any  of  the following – the Lobster,
Penthouse,  Ocean  Avenue  Seafood,  Coast  and  Veranda  Bar, for food and
cocktails.  The  city  was named Southern California’s best dining venue in
2008.  The  new  trend  is  to  offer  greener menus. Monterey Bay Aquarium
Seafood  Watch Program advises local chefs which fish come from sustainable
sources.   There   are   good   ratings   for  Santa  Monica  Seafood  café
(www.smseafood.com). And Border Grill, for eco-friendly Mexican fare.
www.santamonica.com

Newspaper tycoon William Randolph Hearst knew how to make a girl happy. He
built his mistress, silent screen star Marion Davies, a 106 room mansion on
Santa  Monica’s  seafront. They threw lavish parties for Chaplin, Garbo and
Gable.  Time  and  earthquake  took it down. But that wasn’t “The end”. The
city,  and heiress Wallis Annenberg funded Annenberg Community Beach House,
the  USA’s  first  public  seaside  club,  on the site. It opened last year
(2009),  and  is  free  to  all  comers.  Whoever  you  are  –  tourist  or
Oscar-winning  star  from nearby Hollywood – you stand in the same line. It
has  many  gracious touches, and a top green rating. The decking is made of
recycled plastic. The black-and-white tiled pool is solar heated.

If  your  idea  of  “active” means no more than ordering another Blueberry
Thyme  cocktail  at  Fig  Restaurant, that’s fine. But if you want join the
city’s  full-on  outdoor  lifestyle, there is a long list of things to try.
The  Trapeze  School  on  the  pier  could inspire a new career as a circus
performer, www.losangeles.trapezeschool.com. Perry’s Legends Bike tour will
guide you around the local highlights. www.perryscafe.com.
The  Pacific  Pleasures  Running Tour is an easy pre-breakfast guided four
mile  jog  in  the  soft  sunlight,  past  fine buildings and upscale shops
(before  they  open,  so  no  temptation).  Includes  a  café  stop  and  a
celebration T-shirt. www.offnrunningtours.com
Then there’s volleyball, wave-riding, yoga classes on the beach, triathlon
tuition, skateboarding in Ocean Park – one of its birthplaces – and in-line
skating in the Venice district. www.santamonica.com