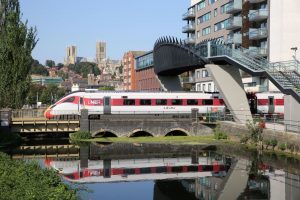 Where to go in post-lockdown UK

This is another in my series of destinations to think about when it becomes possible to travel more freely.

The airlines are already selling cheap tickets for this summer and beyond.

The train companies are more circumspect. They are all, effectively, nationalised now, but they continue to operate, albeit without the fear of incurring heavy losses. But, unlike the airlines, there is very little marketing going on.

It’s a pity that, while it is possible for me to book a trip to the Greek islands by EasyJet, there is no short break package available by train to Cornwall or the Lakes or Scotland, at least for the coming weeks.

And the truth is, a trip for two to somewhere in the UK will still be more expensive than an excursion to a city or resort in a reopening Europe.

The first lockdown, in 2020, was marked by clear blue sky, with not a contrail in sight. People saw clean air and plummeting pollution levels as one of the very few positive outcomes in the earely days of the pandemic.

Then it seemed that, if the marketing people could get to work, a fair number might be persuaded to opt for greener, cleaner modes of transport, particularly if they were affordable. Train within the UK, rather than plane overseas. In the event people shunned the trains throughout the summer, while returning in limited numbers to the skies.

Peruse the rail companies websites,  and the glossy, confident facades give no indication of the deep crisis at the heart of our oldest public transport system. They carry the routine COVID-19 warnings, and the restricted services they having to run. Some encourage booking ahead for leisure trips, but the old fare structure is still in place as a deterrent.

However it won’t be long before travel restrictions are relaxed and we can begin to move around. Cue, perhaps, the new age of the train?

But there are some attractive tickets around, even if you have to hunt for them. And some enticing destinations.

For example, in 2019 the LNER launched a direct London to Lincoln service, the first for many years, using its new Azuma trains. There are direct services from other parts of the country too. Lincoln is ideal for a day out, or a short break, and that’s what 10 million people in London, alone, deserve. The trains going there are new, fast and attractive. Let’s fill them up, to Lincoln and all sorts of other places.

To Victorian artist John Ruskin, Lincoln Cathedral was “out and out our most precious piece of architecture.” It has a thrilling location, high on a hill and visible from afar as you approach the city. Now it”s back to its best. The restoration work that had the West front clad in scaffolding for years is complete. The cathedral stood in for Westminster Abbey in the Da Vinci Code. It certainly fits Dan Brown”s descriptions – the “great abyss” of the nave, big enough for a small football pitch; and the “stone columns standing like redwoods”. I was lucky enough be there a sunny day, to see the “prismatic patchwork of light” from the stained glass on the cathedral floor. The Treasury is a Fort Knox of armoured glass cases, holding bishops’ rings, silver chalices and more. The library has a school book from 1410, with the first recorded rhyme on Robin Hood.

There”s a trio of attractions to catch at the top of the hill in Lincoln after you”ve seen the cathedral. The castle ramparts give the best view in the county, deep into the Midlands. In the castle grounds the old prison is now a museum, where they recreate the misery of the Victorian penal system in original cells. Holograms of inmates impart added, chilly realism. Next door is an exhibition of one of only four original copies of the Magna Carta. I walked via the Joseph Banks Conservatory, with flora the great naturalist and local squire would have known on his voyages, to the Museum of Lincolnshire Life. Its star exhibit is a restored First World War tank, named, with grim levity, Flirt. The world”s first tank was built in Lincoln in 1915.

I set off to the Cathedral, from High Bridge on the River Witham – boats trips in summer – through the pedestrianised foothills, under the mediaeval Stonebow arch, and – whoosh – the cobbled road took off under my feet. The Middle Ages just had to name it Steep Hill. On the way up I found plenty of places to recuperate. There was the Readers Rest book shop, and John Greed Designs, a ”real jewellery shop” powered by a wind turbine. I refuelled on some of the new range at the Wiz Chocolate Factory: almond, hazelnut and cherry nougat, made with Lincolnshire eggs and honey; and Fire Dance extra chilli chocolate. I reached the Roman square, via the ancient Wig and Mitre pub, at the top of the hill just as a young lady clarinetist launched into a Mozart concerto.

Right outside the window of my room in the White Hart Hotel, the cathedral loomed massive, magnificent, and floodlit. Suddenly it turned into a magical musical box, behind that huge gold façade. I was serenaded with a virtuoso performance by the bell ringers (the earliest known Company of Ringers still performing), sending out ever more intricate permutations, on the cathedral”s tremendous peal of bells. This former 14th century coaching inn is one of those comfortable, rambling old country town hotels England does so well, with authentic creaky floors, and complicated corridors. Which is probably why they put Tom Hanks up here – in my room, for maximum inspiration – when he filming the Da Vinci code in the cathedral. They offer the Romantic Weekend Indulgence Package, with handmade chocolates and champagne.

A line of LED lights twinkled a welcome from the slab floors in the Old Bakery Restaurant as I walked to my table in the glassed-in garden extension. This was  a prime example of the more affordable good cooking you can find in smaller towns and cities. They served me the house aperitif, Prosecco, apple and lemon. I chose the 5 course tasting menu. Waiters beat a path from the kitchen with multiple delights. From the blur of dishes I recall an exquisite butternut squash soup (with home-made sour dough bread), black tagaitelli, smoked salmon, cream brocollli, aioli and roasted scallops, and a tangerine granita sorbet. Each course was matched with a wine – mainly from the chef’s native Italy. www.theold-bakery.co.uk I also had an excellent lunch at the Cheese Society Restaurant.

English Heritage enhanced six of the historic sites in its care by asking designers to create gardens alongside them, under the Contemporary Heritage Garden scheme. One of them was the Medieval Bishop”s Palace, in the shadow of the cathedral. This was once the power base of the Bishops of Lincoln, who ran the immense diocese stretching from the Humber to the Thames. Today it is a well-kept ruin – take the audio guide to make good sense of it. The garden, with the Roman city wall as its eastern boundary, is inspired by the cathedral”s structure. Vines and trees and roses echo its vaulting and spires. And there’s a detail the Romans would have appreciated, a vineyard, one of the most northerly in England.