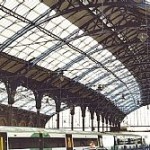 Purists will note that it’s been updated from 1947 (when Richard Attenborough starred in his breakthrough role as Pinky) to 1964. And nobody would blame Brighton itself  for stalking off in a huff after the location scouts chose nearby  Eastbourne for the seaside shots.

But do film goers really care?  I’m sure many will be inspired to visit the place it’s meant to be about, and head for Brighton just the same. I was there not long ago, and wrote the following.

Even when it’s grey skies everywhere else, exciting, extraordinary Brighton never fails to sparkle. I took a spree to the South Coast’s premier seaside resort, the people’s day trip for 160 years, and found the grand old Sussex lady still has the power to thrill.

I took the grand entrance to Brighton, arriving by train in the huge shed of a terminus. This was the point of entry for so many multitudes of day trippers, arrivingdown the decades. (Today the fastest train is 51 minutes from London.)

Sharp left, down the hill and I was into unorthodox Brighton’s take on the Arabian bazaar. This is North Laine, one lazy straggle of serendipity shopping in unusual, unique and downright wacky independent retailers. Designer fashion sits next to retro 50s wear. Oriental and Balinese furniture smuggles up to jewellery and specialist kites shops, next to a fudge pantry, smoothie outlets and independent record shops (Resident is just one of many places worth exploring). Carry on seawards and you reach (note the confusingly similar name) The Lanes. This is original and posher Brighton – smarter shops in narrower, winding passageways. Crossing just one main-ish road, I reach the sea front without seeing a single same-everywhere High Street shop or mall, although Brighton does have them.

It’s one of Britain’s most distinguished sea fronts, the two mile long esplanade from Hove to Brighton Marina. You pass proud hotels, one of the world’s best piers, and the famous pebbly beach where politicians pose during party conferences. The Skylark (as in ‘Any more for The Skylark…’) once plied from here. They tell its story in the (free) fishing museum, next to the cluster of artists’shops under the arches. The water is now, officially, good enough to bathe in. Try not to notice the stricken West Pier (Britain’s highest observation tower, at 450 ft, is planned for here). Star feature on the East Pier is the 125 feet Super Booster, with its 60mph plunge. (The Sea life Centre, 150 species and 57 displays, is nearby.) Then take the world’s oldest electric railway and pootle eastwards to Yellowave. The UK’s first permanent beach sports complex offers sand-based sports, from beach volleyball to Ultimate Frisbee.

Brighton has spanned many epochs, from easy-going pre-railway fishing port through to political conference centre. One way to dip into its past is by soaring overhead for the sea-front view from The Snowman, in a 1930s art deco Dragon Rapide biplane. This was perhaps the most successful British-built commercial passenger aircraft of its time. As one of one of only eight passengers, you are guaranteed a swanky window seat for the 30 minutes golden era of aviation jaunt. You mosey elegantly over Brighton and the Sussex coast as far as Beachy Head, with the unfolding backdrop of the South Downs and wider Southern England beyond. Flights are from nearby Shoreham Airport. Or you can release your inner Biggles with the open cockpit, wind-in-your-face experience. Take a spin in the quintessential English biplane, the de Havilland Tiger Moth.

Top of the townhouses

If you couldn’t afford a palace in the 1800s, a Regency town house in Brighton was the next best thing. Come close-up to Brighton’s graceful backwaters – Regency, Russell and Clarence Squares, and Royal Crescent where Lord Olivier lived. And now you can visit one of the finest. The Regency Town House, a five storey, Grade 1 Listed 1820s building at 13 Brunswick Square, is full of authentic Upstairs, Downstairs detail. Then pop next door to see a time capsule of a Regency basement at no 10, virtually unchanged since it was built, with its vaulted coal stores and chicken coup in the yard. Regency houses are seriously addictive, so why not stay in one? In Grade 2 listed hotel Colson House rooms are themed on such screen icons as Clark Gable, Bette Davis, John Wayne and Bogart. Take a drink on your balcony, then watch their best movies (the management provides) on DVD in your room.

Was there ever a royal palace so profligate and ornate as the Royal Pavilion, George IV’s seaside retreat, and surely the ultimate makeover of a farmhouse? Curvaceously Indian on the outside, it becomes an intoxicating whirlwind of Chinese, Mugal and Islamic inspired colour and shape inside. Even if you don’t go in (www.royalpavilion.org.uk) to see the splendidly refurbished interior, it’s worth wandering (free)in the restored gardens. They are graced by two elms, once common in our countryside. Next door (free) is the Brighton Museum and Art gallery, where there’s a discreet little reference to that Brighton institution, the Dirty Weekend. The battling Mods and Rockers of the 60s also feature. The Theatre Royal recently celebrated 200 years. One of its stars was local boy Laurence Olivier.

People kept stopping to peer in through the big picture windows at Riddle and Finns as I enjoyed my smoked mackerel pate with horseradish appetiser, with a crisp glass of Muscadet. But we diners were not the entertainment. It was the chefs at work in the open kitchen next to the tables. Transparent catering is one of the appealing details of this unfussy restaurant in narrow old Meeting House Lane, along with the high stools at marble topped-tables, red-tiled floors and white-tiled walls. ”The best whitebait in Brighton, so they say,” suggested my waitress, setting down my starter. My main course of salmon in a champagne sauce made the lunchtime menu excellent value. I declined the sautéed whelks with chilli and the longest list of champagnes in town (so they say, again) to be in best form for sumptuous afternoon tea at the Grand Hotel – scones, and wicked chocolate dipped strawberries and cream.