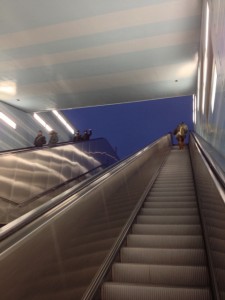 View from the Hamburg underground, Hafen City. Photo – the writer

Hamburg, the green-blue gem of North Germany, spangled with parks, lakes and canals, was chosen as one of the New York Times’ 52 places to go in 2017.

The other notable new attraction is  Elbphilharmonie music performance centre, which opened in January 2017.

I visited this lively city inn 2016. It was already one of Europe’s biggest cruise ship ports. So many visitors arrive by water.

My pick includes the area where the Beatles launched their career, a former World War II bunker with the highest cafe in town, and elegant acres of upscale shopping.

The biggest sound in music was launched here. The Beatles’ Hamburg years lasted from 1960 to 1962. The group developed their sound, and launched the pudding bowl haircut, to a design by Astrid Kirchherr. The beat goes on around the streets of St. Pauli which includes the infamous (and now much tamer), red light district, Reeperbahn. The main place of homage is Beatles-Platz, where Reeperbahn and Grosse Freiheit meet. Metal statues of John, Paul, George, Stu Sutcliffe, and a composite of drummers Ringo Starr and Pete Best, stand on a circle paved black to look like a vinyl record. In Grosse Freiheit commemorative signs mark the site of the Star-Club, and the still standing Kaiserkeller, where the Beatles played.

You are never far from water in Hamburg. There are great decorative slabs of it, in the city centre. “Nowhere does the summer fade more splendidly then along the gold and orange banks of the Alster” wrote one-time resident John le Carré in Smiley’s People, referring to the larger of the two lakes. The smaller lake, Binnenalster, faces the smart shopping promenade Jungfernstieg, one of many in this prosperous former Hanseatic League trading city.
Canals link decoratively down to the port, one of the biggest in the world and now in the middle of a big rebuild in HafenCity,. Take the ferry and you may meet British royalty, close-up. Since 2004 Hamburg has become one of Europe’s major cruise ship ports. Among the vessels that tie up here are Cunard’s Queen Mary and Queen Victoria. Another magnificent watery way is the cycle route along the river Elbe.

St Nicholas is a place of calm, poignant ruin. The Victorian British architect George Gilbert Scott was commissioned to restore the mediaeval church after a fire, and from 1874 to 1876 its 483ft high spire was the world’s tallest building. In 1943 it was largely destroyed again, by Allied bombers, in raids that killed 30,000. This time, in common with Coventry Cathedral, it was not restored. It stands today, the shell of the nave and that still overwhelming spire, as a stark statement against war. Nearby is the city’s architectural centerpiece, the Rathaus (city hall). Another fine and striking building is the Chilehaus (Chile House) a ten-story office building in the shape of a ship’s prow that somehow survived the bombs. It was built at the peak of hyperinflation in 1924, in the “Brick Expressionism” style. I recommend the Slowman restaurant, on one of its corners.

4
Small world.
Miniatur Wunderland is one of the largest model railways in the world, an eccentric delight for controllers of any girth. 1000 teeny trains negotiate 1200 signals on 10 miles of track in a perfectly composed landscape of 250,000 miniature trees. The random geographical selection takes in Switzerland, USA, Italy and France. One section depicts Hamburg itself. For a complete change, visit the city’s principal art gallery, the Kunsthalle. One star item is the outstanding altarpiece painted for the city’s St. Petri Church in 1379. 24 wing panels depict the biblical story, from Creation to the Flight into Egypt. The Altarpiece of St. Thomas a Becket is the first known work depicting his murder in Canterbury cathedral.

How to you recycle a former nine storey Nazi defensive tower, with reinforced concrete walls up tp 14 feet thick? One of 13 Hitler built in response to a daring RAF raid on Berlin in 1940, it was so stout even the British army failed to knock it down in 1947. The solution mixes tourism and green power. The tower, in the Wilhelmsburg district, has become Europe’s largest renewable energy power plant, complete with a panoramic terrace 100 feet up running around the whole building, and a cafe. A museum tells the story of the building – it gave shelter to thousands during bombing raids. Today rooftop solar panels and a woodchip power plant generate electricity for 1000 homes and heating for 3000. 25 minutes from the city centre (S3 train to Immanuelplatz.)

It’s the place to express your inner count, graf, vicomtesse or marquesa. You no longer have to be nobility to stay at the baronial Fairmont Hotel Vier Jahreszeiten, all historic luxury overlooking the Binnenalster Lake in the city centre. Little has changed since its glory days a century ago. Wood wainscotting, marble floors, oil paintings, stuccoed ceilings and glorious flowers set the mood. The antique lift clanks up and down, like a favorite old retainer. I recommend the Jahreszeiten Grill, in the art deco style of the 1920s, for good straightforward Hanseatic fare, such as venison with red cabbage. Doc Cheng’s offers inventive European-Asian fusion cuisine. It’s good to stay, but not essential. Non-residents can walk into the main lounge, the Wohnhalle, snuggle into an antique armchair before a wood fire and order English afternoon tea, with egg and cucumber sandwiches, éclairs, mille-feuilles and fruit tarts.

I stayed at the Fairmont Hotel Vier Jahreszeiten (www.fairmont.com), and flew courtesy of British Airways, who operate daily flights to Hamburg. www.ba.com.