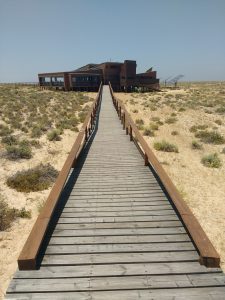 A shorter version of this article appeared in the Mail on Sunday, January 8th, 2017.

Were we the only tourists on the Algarve who didn’t play golf? It certainly felt like that at Faro airport as we searched for our suitcases on the arrivals hall carousel under a mound of bulky bags of clubs.

Many of their owners were heading, like us, for Quinta do Lago, the gilded zone of exclusive villas, umbrella pines, artificial lakes, smart shops, tennis courts and fine beaches where the main recreation is striking a small white ball great distances, then steering it into a small hole.

If my wife and I felt like imposters, the concierge at our hotel, the 5 star Conrad Algarve, was having none of it. “Don’t worry”, he soothed. “Lot’s of guests don’t play golf, and we have the answer.”

A  long list of answers – or “experiences” as the hotel’s website calls them – as it turned out. But there was no contest. How could we resist the speedboat tour of Ria Formosa Natural Park, the aquatic antidote to all those perfectly manicured fairways?

So next morning after breakfast we set off on the short trip to this remarkable, undeveloped necklace of shape-changing sandbars just off the Algarve’s south, Atlantic-facing shore. Most visitors can take a free overview as they come into land at Faro airport.

We drove into the old Faro dockland and parked on the quayside. Our guide Eliza met us at the end of a jetty, to welcome us aboard. Honouring that fussy housekeeping convention of smart craft everywhere, we stepped gingerly onto a crisp white towel protecting the deck.

As pampered mariners, we were playing out our own Portuguese Age of Discovery, in miniature. In truth the speedboat was only for show. There’s nowhere really to speed.  Nor was there anything exclusive about our destination. Public ferries run regularly to the islands, from Faro and Olhão.

We took in a fine view of old Faro, as we nosed out into the lagoon. As the city shrank behind us, Eliza, a marine biologist from Greece filling in before her next university degree, explained the wildlife. Here, some egrets. There, a colony of flamingos. And, quite new, storks. Some stay here year-round now, forsaking their traditional breeding areas such as Eastern France.

Our first call was car-free, three mile long Culatra Island. Most visitors come here. Instead of roads, it has long, straight wooden walkways, bordered by fishermen’s cottages, holiday villas and a few cafes. The main hazard was a man on a mobility scooter. The pleasures are simple: beach, swimming, strolling and clam-digging – another of the experiences (the word “trip” doesn’t do them justice) our hotel offered.

We made a circuit of the island, still at ultra low speed. Our captain was looking unfulfilled, with all that unused throttle at his disposal. Dead slow in this craft was the ultimate nautical contradiction.

Last stop was Ilha da Barreta, Deserted Island. In the days of rampant tourism development, nowhere sunny on the southern coast of Europe seemed safe from yet another hotel building spree. These islands must have been fair game, sitting, as they do, right next door to the Quinta do Lago district. But somewhere along the line the mood changed, and they were recognised for the protect-at-all-costs nature havens they are.

Today this five miles long sandbar is the Algarve’s 21st Century touristic success. Even in high summer it has zero permanent inhabitants, and few visitors, while the nearby mainland beaches teem. There is only one structure, and it leaves the lightest of ecological footprints. It’s the solar-powered Estamine fish restaurant. 90% of its power comes from the sun.

After an excellent meal we wandered among the sea holly, gathered copious shells, then took the public ferry back to Faro. The restaurant manageress was first off the vessel. In a moment that summed up Ria’s green ethos, she made straight for her all-electric BMW, parked on the quayside.

Back at the hotel we pondered that list of experiences the Conrad Algarve offers. Forget crowded coach tours. These are small and select group adventures into the alternative Algarve.

A 4 by 4 excursion to São Brás de Alportel, for example, where the best wine corks in the world are cut, sustainably, from living trees.  Then there are catamaran rides, and the chance to sample the powerful medronho brandy.  No time, unfortunately, so we settled for the Conrad’s very own tour of local wine and food on the five course taster menu in its own Michelin star restaurants Gusto.

We had one last experience, and this one we made ourselves. That evening we walked out of our hotel, which is built like a 18th-century Portuguese palace, down the impeccably-manicured avenues lined with expensive mansions, where the Porsche and Range Rover was conveyance of choice. I would say Quinta holds its own against upmarket Californian resorts such as Newport Beach.

We found the bird easily, hopping on some ornamental stonework. It  gave us the avian equivalent of the “Don’t you know what I am?” look that you might get from the stars who live hereabouts. Resplendent in three-tone livery, this bird, quite bizarrely, is found here and in East Asia, nowhere else.

If this golden quarter had a motif, perhaps, rather than the golf ball, it should be this, the azure-winged magpie