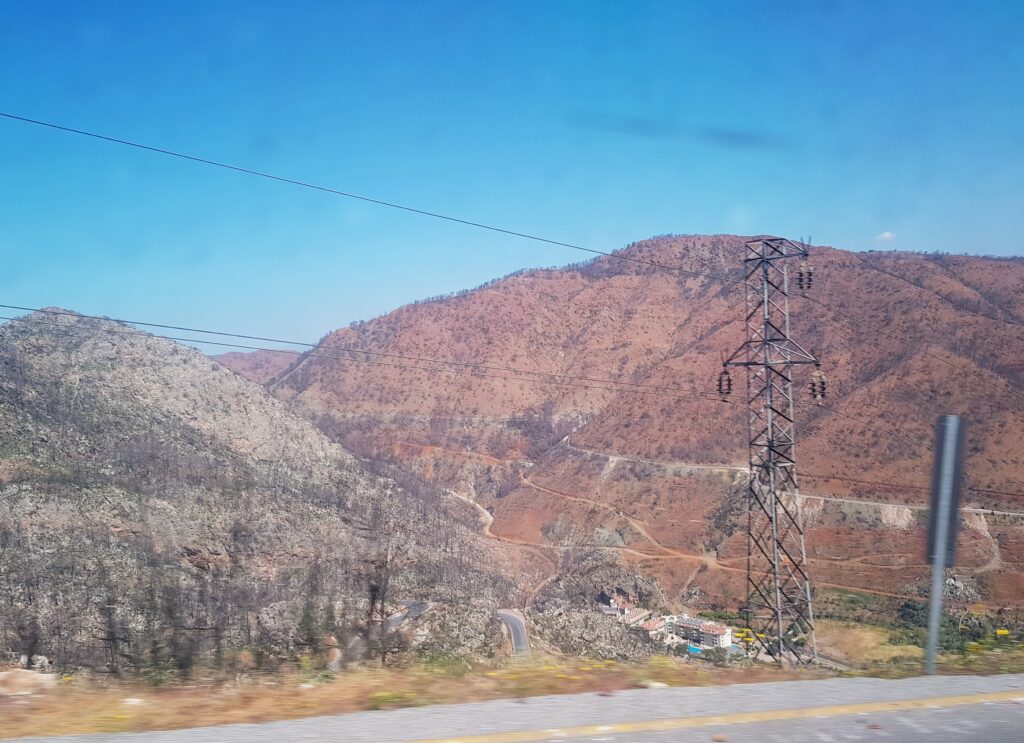 Burnt and cleared hillsides near Marmaris, Turkey, May 2022.

The forest fires in Turkey in the summer of 2021 were a catastrophe. Images of blazing mountainsides were seared across nightly news bulletins. Holidays were cancelled, resorts evacuated and suspects arrested, although as the Turkish fires were only the worst of a series of conflagrations across the Eastern Mediterranean, it was quickly accepted that the cause was, in the main, not arsonists but extremely hot weather and tinder dry conditions.

Many saw just one more example of climate havoc. Professor Hüseyin Barış Tecimen from the Cerrahpaşa Faculty of Forestry at Istanbul University, said the fires were exacerbated by drought and other effects of climate change.

Wildfires are common in Turkey during the summer, but the blazes in July and August 2021 were exceptional. They were the biggest forest fires in the nation’s history. It lost as much forest in 10 days as it did over of the previous two decades. About 150,000 hectares of forests burned, in 54 provinces. But most of fires were in Antalya and Muğla in the Mediterranean region, on and around the popular tourist coasts, with 16 described as “mega fires”. The blazes claimed the lives of at least eight people.

But there were unwitting human culprits, many millions of us; and the older we are, the more damage we are likely to have caused. Huge numbers of tourists from the UK have enjoyed the Turkish idyll since the country opened itself to mass tourism in the 1990s, and almost everyone travels there by aeroplane. The train takes days; only old-fashioned adventurers would drive. Ship is not an option. Turkey’s tourism industry is founded almost entirely on the biggest, passenger-by-passenger, carbon-emitting form of transport, and the fastest-growing.

So compared to destinations across Europe, a disproportionately large number of tourists to Turkey, and that includes, in recent years, many Russians, use the most carbon-heavy form of transport to get there. But It is too easy to pick on them. Carbon emissions worldwide change climate. So widen it out. Everyone who flies or has flown, or uses fossil fuel-driven transport, has contributed to climate change. So only an infinitesimal number of people bear no blame at all. (I have flown a lot, too – to Turkey and many other places – but I have cut back, with only two flights in the past 30 months.) 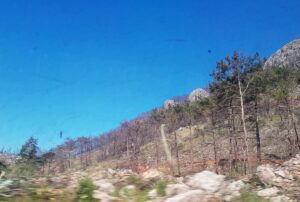 Hillside near Marmaris, May 2022

One year on from the fires, there are green shoots, both metaphorical and the real ones appearing on those blackened slopes.

EasyJet’s carbon offset scheme is one. Clearly the best solution to the carbon crisis is to not create C02 in the first place. But the hoped-for behavioural change among tourists after the pandemic has not materialised. People are not turning away from flying in appreciable numbers. Turkey is as attractive as it ever was, and more so with an exchange rates favourable to visitors, while the country’s inflation rate soars.

EasyJet offsets the carbon emissions from the fuel used for all its flights, at, it claims, no extra cost to its customers. Previous schemes were voluntary – opt in if you want to, or just carry on flying. “Offsetting does not prevent the creation of new emissions from flying,” the company’s website explains. “Instead, we compensate every tonne of CO2 that easyJet emits from the fuel used for our flights by buying the equivalent quantity of carbon credits via forestry and renewable energy projects that are certified to the highest standards in this field, which either avoid the release of carbon dioxide into the atmosphere or directly remove carbon dioxide. All projects are independently certified by auditors from Gold Standard or the Verified Carbon Standard, which are independent, internationally recognised, high quality offset certification schemes.”

Offsetting carbon emissions through tree planting and habitat creation and other conservation schemes around the world has some virtue, as the aviation industry strives for cleaner flight. Whether this carbon offset plan can succeed where others have failed remains to be seen. But there are few alternative strategies at the moment.

Experts think we will have to wait until the 2030s or 2040s before large carbon-free commercial aircraft enter the market. Meanwhile there is some progress on small-scale zero-emission flying. Norwegian company Start Norge wants to launch the first commercial flight in 19-seater electric planes in 2026 on the popular domestic route between the Norwegian cities Stavanger and Bergen.

Today’s batteries are too heavy and inefficient to power anything other than a small aircraft for a few hundred kilometres however – distances that can anyway easily be covered by car or train.

Hydrogen-powered aeroplanes still present a considerable technological challenge. And hydrogen-powered aircraft require major redesign of the plane. The hydrogen would require bigger fuel tanks with strong insulation, too heavy for today’s aircraft to take off.

Synthetic kerosene would make aviation cleaner, but its development is too slow for planes to be able to fly CO2-neutral by 2050.  And all the while aviation continues to grow at about 5 percent each year.

So airlines and governments are likely to fall back on offsetting – widely considered the best way to address the impact of carbon emitted from flying in the medium-term.

So what of the devastated hillsides of Turkey? Tourists this summer can scarcely miss the ravaged slopes, with endless neat stacks of cut wood that survived the flames, alongside a tapestry of new tracks cut into what remains of the forests. The slopes had barely cooled before the General Directorate of Forestry announced plans to plant at least 252 million saplings across the country by the end of 2021. 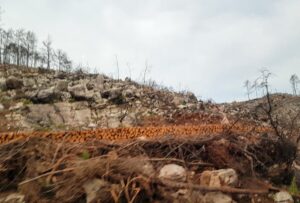 Piles of logs from cleared trees, May 2022

Turkey already had an ambitious policy of increasing the size of forests. Plantations are everywhere, from the barren lands of the southeast to the rainy terrain of the Black Sea region. Red pine, black pine, yellow pine, fir, spruce and cedar make up 60% of forests – the rest are oak, beech, alder, chestnut and hornbeams.

National Forestation Day, launched by President Erdoğan, galvanises the nation every November. Communities are caught up in a frenzy of treeplanting, aiming to beat records such as 303,000 saplings planted in one hour in the inaugural year.

The English language websites of the biggest Turkish newspapers, while recognising the scale of the fires, have been relatively sanguine about the prospects for recovery, provided that there are no more serious summer fires, which seems a lot to hope for.

There were voices of caution, however. Dr Sedat Kalem, WWF Turkey Conservation director said the government should prioritize conservation, and concentrate on ecosystems, rather than timber production.

NATURA’s director Dr Okan Ürker called for a new approach to restoring burned forests. “Plants that grew rapidly by themselves in the burned areas give us clues about the natural regeneration potential of an ecosystem. We have to take inspiration from this potential. Instead of intensive forest ‘engineering,’ we have to opt for natural restoration methods,” he says.

Planting the forests with a single type of tree can also make them more fragile. Where natural regeneration takes place in burned areas, the intervention should be reduced and if the need arises, additional seeds can be planted. Besides, heavy equipment used in preparing the soil for tree planting may harm the ground and affect biodiversity.

Now it’s summer 2022. Turkey prepares for another potential season of wildfires. It’s reported to have 55 helicopters and 20 planes ready to dump water on burning forests; 15,000 volunteers has been recruited to fight fires, but after 2021 it is now understood that only fast response accompanied with aerial support can stop the fires.  Drones are being deployed to monitor forests and enabled faster response to wildfires.

Professor Tecimen said red pines, one of the main species in Turkey’s forests, are most at risk from fire. “Red pine forests can regrow faster and we can keep our red pine forests,” he told the newspaper Daily Sabah. “But we should also take extra measures, like creating protective strips with fire-retardant trees.”

Fire damaged or destroyed 2,881 hectares (7,119 acres) of forest between June 21 and 23 near Marmaris in SW Turkey. 45 helicopters and 12 planes were deployed to fight the fire and drop water on the flames. Arson is suspected, and the police have detained a suspect.