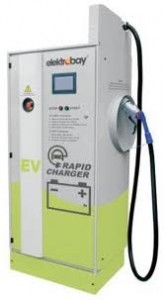 Turn up, plug in, drive off

If you owned an electric car, would you take it on holiday with you?

The answer, with range anxiety alarm bells ringing, is probably not.  You  would need  somewhere to charge  it,  and the  prospect of threading a wire through the landlady’s  kitchen window at the B&B is a bit daunting.

Hotels wouldn’t be any better, yet.  It’s a bit early to expect them to have charging points in their car parks, and the smaller the place, the less likely they are to oblige.

So you would probably leave that nice new Nissan LEAF  or Mitsubishi i-MiEV at home,  and head off in your other, gas guzzling, car.

With such a thin support infrastructure for  electric vehicles (EVs), any holiday facility that comes with the very latest SGTE 50kW quick charger has to be one to think about.

This week (June 24, 2011)  Haggerston Castle (*) in Northumbria becomes one of the first holiday centres in the UK to be so equipped. Electric car owners  from across the north-east setting off from home on a full battery (no more than 80 miles away, to be safe), should have  enough  power to reach the holiday site, just off the A1,  close to Berwick-upon-Tweed.

Then, for the duration of their holiday at this Haven Holiday park, their range anxiety fears  should be allayed.  The site, owned by Bourne leisure, will let all users, including  nonresidents passing on the nearby A1, to charge  their vehicles for nothing.

The quick charger delivers (for the technically minded)  50 kW (DC),  with a 400 V input, charging a vehicle’s battery by up to 80% of  it’s capacity in 20-30 minutes. There are plans under the North East’s Charge Your Car project to install further chargers in national parks and other attractions  in the region,  which should give  drivers  peace of mind  way on a longish tour through the English and Scottish Borders. The target   is 1000 charging points in the north-east by 2013.

At the moment  there is still a carbon cost to this, with electricity coming from the National Grid.  The next challenge is to link  this and other chargers to solar, wind or other renewable energies. Until then a holiday here in an electric car  will not be a truly carbon neutral experience.

In May (2011) a Tesla Roadster Electric Car completed the first ever drive down the length of the United Kingdom by a production electric car – 36 hours and 894 miles.

The Roadster, owned by Kevin Sharpe of climate-change charity Zero Carbon World and co-driven by EV expert and enthusiast David Peilow, used no petrol on the trip, charging the battery at a publicly available charging station installed at hotels.

Click article for background and a map of the charging points.