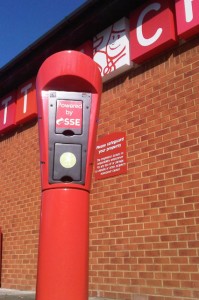 Charge for good? Electric cars welcome in every restaurant by end of 2012

We remember them well, those worthy but dull roadside stops. They modernised Little Chef menus in recent years, and even dabbled in what passes for haute cuisine. Heston Blumenthal redesigned the fare at the Popham restaurant on the A303 near Basingstoke,  with coq au vin and braised ox cheeks. But still the brand didn’t really stand out, to the extent that you would actively build in a stop at one on a long journey.

Then somebody at the company had a brainwave. Why don’t we, alongside recharging travellers’ batteries, recharge the battery in their electric car (EVs) as well? It is almost impossible to spend less than 20 minutes at a Little Chef if you’re eating. So let’s call it called at 30 minutes and, with one of the new fast chargers, that brings the electric car battery up to about 80% full – which is plenty to carry on, maybe to the next Little Chef.

The fact that only a tiny proportion of customers actually have an electric car, and at £25,000, they are going to remain beyond most people’s spending power for a few years yet, doesn’t matter a jot. This is a perception-changing move. Motorists will grasp that longish electric journeys are entirely possible, with the support of one of the most familiar names on the highway.

What’s so clever about this initiative is that Little Chef has jumped early into what would soon become a very big network, with 126 installed by the spring 2012. The vision is for every Little Chef, the first restaurant chain in the world to do it,  to have an EV charging point by the end of 2012.

So although there will soon be lots of chargers scattered about the country (Twitterers like @dpeilow are doing excellent work in calling for them) when you set out on your hypothetical electric car by December  2012, you will recall that there is one place where you can be absolutely certain of finding a charger: Little Chef – free of charge until the end of 2012.

The chain gathers bags of free publicity, and establishes its environmental credentials at the outset. That’s quite an achievement, when it’s offering something that only a tiny proportion of its customers will take up, at least for the foreseeable future.

It’s going to be very hard now for anybody from Top Gear, or BBC  News (to be fair,  the BBC’s Brian Milligan after driving an electric Mini very slowly from London to Scotland, using only public charge points, did conclude by saying “from here on out, the technology will improve rapidly”) to set off on a journey with the serious prospect of not reaching their destination.

The Little Chef project,  in partnership with SSE, generator of renewable energy and Chargemaster, one of Europe’s leading providers of charging technology, is a sign of how rapidly things have moved, since the Nissan Leaf, the 1st all electric family car came out last spring in the UK . At that time, I recall, there was very little talk about anything other than regular, 7 or 8 hour chargers. The fast charger, 30 min to 80% charge, was hardly mentioned. Yet now it seems nothing else will do.

I suspect the next big push, perhaps 2012’s big thing, will be the solar canopy, where you plug your electric car in under a big array of solar panels, so the power you use will be genuinely CO2 free. I first heard of these in the summer (2011). Then I see one was installed in Plainville, Connecticut, in May – GE and Inovateus built a 100-kilowatt solar carport with 16 slots for EVs to power up. Let the sun blaze down: not only is your car in the shade, that same heat of the sun will be powering it.

I’m one of the many people who can’t afford an electric car but wish them well. Are we close to the tipping point of expectation, where we be able to dismiss those two big counterarguments – no charging points out on the road, and anyway, it’s the same old CO2, just shifted from an oil well to a coal fired power station?