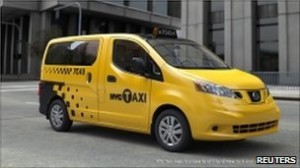 New taxi is double the mileage, with an electric version to come

New York taxis may be coloured the most cheer-you-up buttercup yellow, but  lift the bonnet  on the new model  and you will find the brightest shade of green.

New York’s new cabs will do double the mileage of the existing model and, from 2017, there will be a  version able to run solely on electricity.

Mayor Michael Bloomberg announced the $1bn deal  withNissan this week (May 4th)  to build  the next generation of   the city’s York’s famous yellow taxis. The design will be based on Nissan’s NV200 minivan model.  The  first  cars covered by the 10-year contract will be  on the  streets by  2013.

The Nissan was the most fuel-efficient and the cheapest of the three cars under consideration (it beat models by Ford and Turkish manufacturer Karsan Otomotiv), at about $29,000 (£17,608) per vehicle.

By 2017, Nissan will be able to manufacture the cars to run solely on electricity, New York City Hall said.

It will also feature satellite navigation, so passengers leaving Manhattan will not have to  put up with drivers  not knowing their way around.

The cab, to be built by Nissan in Mexico, is the first New York taxi custom-made to create the best fit for drivers, owners and passengers.