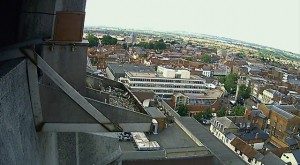 Empty nesters. Aylesbury’s peregrines off somewhere being supreme in the sky

Imagine you had the chance to watch some young lions out on the African savannah taking their first gambolling steps under the protective eye of their mother.

Or if you were on hand in the Arctic when a polar bear showed its young how to slide down a snow slope.

Perhaps it is the idea of watching young killer whales playing around in the water off the Brtish Columbian coast that appeals to you.

You could invest in an expensive holiday and a prestige travel company will take you to just this sort of location to witness some of the world’s most exciting species, close up and entirely natural.

Or you could stand in the temporary car park in central Aylesbury, as I did  this week, and look up at some of the most sensational  athletes in nature, what are said to be the fastest creatures on earth, birds coveted by desert  sheiks, performing in a free show, above my head.

It has been thrilling enough over the past two months to catch a glimpse of one or other, and sometimes  both together, of the peregrine falcons that have been  raising their young at the top of the County Tower. (I wrote previously about them here.) But on Monday this week I had to reassess my personal list of  great wildlife  experiences down the years and include  a full five minute sequence of three peregrines, flying together in wide circles around the top of the big, gaunt concrete building.  They were soaring, gliding, sprinting and occasionally,  or so it seemed to me at the time, playing.

I assume I was watching the mother (or could it have been the father?)  and the two offspring on whom the local district council’s (Aylesbury Vale District Council) cameras have been trained since April.

They must have left the nest sometime last week, still littered with the feathers and other extremities, mainly feet, of their prey which observers believe to have included cuckoo and Arctic tern as well as the more  predictable pigeons.

This is  the Lamborghini or the Porsche  among birds. The peregrine is the desert sheik’s falcon of choice. Yesterday, in the Royal Enclosure at Ascot,  leading a $10 million racehorse  to the winner’s ceremony. Today, in his Gulf retreat, calling in the bird without price  to his gloved hand.

In half an hour or so of watching,  I saw the birds, sometimes singly, sometimes in pairs, and once all three together,  cavorting around the nest with a cry not unlike a seagull’s.  (Mistaking them for seagulls may be the reason that nobody else seemed to be looking up at  this remarkable conservation success story.)

Most of the time the younger birds, if that’s what they were, would return after  a few trial circuits, under the wing  of their tutoring parent, to  perch on the parapet alongside their  nest. Once one of the birds shot off at very high speed away from the tower. I did not see it return. Perhaps it was the mother heading off to the countryside to look for food.

An article  on the Smithsonian’s website (December 10, 2009)  calls the peregrine “the fastest animal on earth…clocked at over 200 miles per hour as they descend upon their target, balling up their talons to stun their prey and then – supremely agile, able to turn upside down with a quick flip of the wing – scooping up their meal.”

www.thetravelalmanac.com notes: “The Peregrine falcon is universally accepted as the fastest animal in the world. It reaches its top speed when in a hunting dive, the stoop, in which it soars to a great height, then dives steeply at high speeds (200+ mph, 322 km/hr)”.

The  natural world’s  A-list hunters are in a sorry state these days. Here is a glorious exception. This successful raising of a family of birds at the top of the food chain in a small  Buckinghamshire market town  (and there are similar peregrine projects in towns and cities across England, including Norwich, Derby, Chichester, Manchester and London) is a cause for unalloyed celebration.

These places are helping to  bring back the prince of birds from the edge of extinction, after it was persecuted and almost poisoned to death in the middle years of the last century.

At more prosaic level, it’s a triumph  for the local council, who were prepared to make a small extra investment at a time of  austerity to encourage this bird to the tallest building for many a mile.  At a national level, it  looks very good on the government’s list of successes when it tots up its annual biodiversity  score.

I hope these tremendous birds will hang around for a little longer and  treat us to some more scintillating aerobatics. And I just want a few more local council tax payers to see where some of their money is being spent.