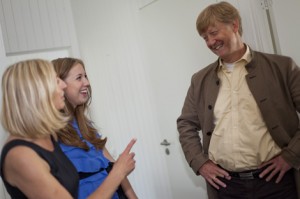 A Swedish family has cut its CO² output by 80% in a six-month experiment, using available technology allied to some not too drastic domestic behavioral change.

Nils andAlicia Lindell and their children Hannah and Jonathan lived in a purpose-built, solar panel and hydro-electricity powered house in Hasselby Villastad in the suburbs  of Stockholm. The parents were given an electric Volvo to drive.

The point of the “One Tonne Life” project was to see if the Lindells could reduce their carbon (CO²) emissions from 7.3 tonnes per person per year, which is about the average for the Western world, to just one tonne.

This is where experts think we really need to be if  we are to avoid significant temperature increases leading to dangerous climate change.

The first thing to note is that the Lindell family didn’t quite make their target in the experiment, backed by car manufacturer Volvo and two other Swedish companies – house builder A-hus and energy supplier Vattenfall. They managed an 80% reduction (down to 1.5 t per person), when they needed an 85% cut to come down to 1t. But it was  nonetheless a remarkable exercise in family belt tightening, without too much obvious discomfort. (Do the ladies above look as if they suffered?)

As in many journeys, the first part was the easiest.  The family cut their CO²  dramatically in the first few months, to 2.5 tonnes, without any major compromise in their everyday lifestyles. The big savings came from transport, with emissions down by more than 90%. Most of this came from the Volvo C30, not yet publicly available,  recharged with electricity from hydro-power and the home’s solar panels.

The house produced its own electricity and, with supplementary renewable electricity from hydro-power, carbon dioxide emissions from purchased electricity reduced to almost zero. All electricity not consumed by the family was fed into the national grid or used to recharge the electric car (EV).

The family took great care  over the carbon footprint of the food they  chose. Towards the end of the trial period, the Lindells ate only vegetarian dishes, and dairy produce was replaced with soya and oat-based alternatives.

It was the last lap  that defeated  them.  In the end the family was reduced to closing off a room, and giving up TV  and going out for entertainment. They still didn’t quite manage the last 5% because of the CO² emissions  from the manufacture of products in the house.

“We have been able to demonstrate that with the right know-how and motivation, it’s possible to get quite close to one tonne,” commented Nils Lindell. “Not only that, it’s been very enjoyable and a really educational adventure.”