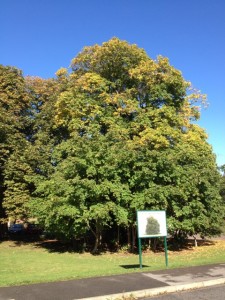 Particularly magnificent example of the sort of trees councils help to save. Acer cappadocicum (Cappadocian Maple) in Winslow, Bucks

The media strains to find positive things to say about the work of councils, and elected councillors. It’s much easier to report the opposite. The sort of news story that goes down well, and has the reader or listener nodding in agreement, is about petty, obstructive Town Hall bureaucracy, interfering busybodies imposing silly rules that complicate and obstruct the lives of decent citizens.

Here, for a change, is one of those stories we don’t see so often, about a very good morning’s work by one English council. It followed the rules, and saved a beautiful, hundred-year-old lime, which, if the “freedom” of the owner had prevailed, would have been logs and sawdust by now.

I will not mention any names. I chose this actual case only to illustrate a general point. All over the country councils are protecting and saving trees, just like this. Some would call it interference. Others – most of us I suspect – would see it as an important strike for protecting a hard-pressed environment.

Earlier this year the owner of an old house in a Southen English town applied to the local council for permission to cut down a mature lime tree in her garden. The council refused consent and moved quickly to apply a tree preservation order (TPO), to stop the owner taking any action in the short term, before the case could be examined more fully.

A TPO is a useful weapon in a council’s armory. In many cases it cannot refuse consent for necessary work to be carried out on a home owner’s trees, such as pruning and even felling. However it does have the option, if it considers the works would result in loss or harm to a tree, of serving a tree preservation order in the “the interests of amenity”,  and  (this from one council’s FAQ section) “to protect trees which make a significant impact on their local surroundings. This is particularly important where trees are in immediate danger.” Council officers can bring in an order  immediately, and then have it confirmed within six months.

In this case one of the tree offices wrote a report. According to the homeowner, the tree had damaged part of the boundary wall, and could impact on the rest of the wall. It was a potential hazard to people in the garden, and entering the property.

From the point of view of the wider public, the officer noted, the lime was a conspicuous and highly attractive feature within a conservation area, a strong feature visible to people from outside. The tree officer concluded that cutting it down it would have a significant effect on the character of the area.

As is normal in these cases, the group of councillors visited the house with council officers to see the tree for themselves, and make a decision. (Tree committees take their members from all political parties, and do not divide on party lines.)

The tree officer told them that the lime tree, between 80 and 100 years old, was close to full maturity. It seemed to be in good condition.

He explained the method they use, the Heliwell System, which measures the visual worth of a tree, to assess whether trees qualify for TPOs. A points system is used. The minimum score for is 80 points. This particular tree was a clear qualifier, marked at 114 points.

The officer went on to say there was no evidence of any defect in the tree to suggest it might cause a problem. There was no direct evidence it was pushing the adjoining wall. Felling the tree was not considered to be “in accordance with modern arboricultural practice, and premature at this time given the lack of justification.”

The assembled councillors discussed the state of the wall and concluded that it was in good condition, and simply needed some maintenance. The members unanimously concluded that this splendid lime had an amenity value and recommended that the TPO order be confirmed to prevent it from being removed.

People chop down trees in their gardens all the time, and why should they not? They’re in the wrong place, or they impinge on the property. But some trees grow to be tall and magnificent, and become a sort of public property, and cause no harm or inconvenience to the householder. Society, represented by the council, then steps in to protect them on behalf of us all.

And where is individual freedom, you may ask? This case illustrates an interesting restriction of that freedom, where people cannot make significant changes to, or on, their own property, if they affect what is perceived to be the common good. So they can’t change the appearance or character of a listed building, and neither can they destroy a significant natural feature, such as a mature tree, even if the owner him or herself may have planted it. Most people, I would think, would support the constraint the TPO put on the householder, as a necessary check in support of a wider good.

Is there a better way to save trees? Some remote national tree agency, perhaps? But then, I suspect, applications to fell trees such as this would have to be processed in a more rigid, bureaucratic way, very possibly ending in a court hearing, where the argument of the more persuasive lawyer might prevail.

And I doubt whether we would see local councillors involved, addressing the issue on nonparty lines, with the wider public interest in their minds.

So let the Englishman’s home be his castle, but only up to a point. Just as most right-thinking citizens are concerned about preserving trees in the Amazonian rainforests, shouldn’t they also applaud a system, overseen by elected representatives, put in place to save trees in their own villages, towns and cities?