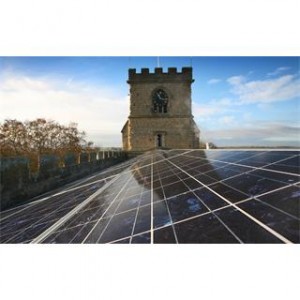 It would be wrong to overwork the metaphor of the Church of England turning to that most pagan of symbols, the sun, rather than prayer, for salvation. It’s a neat solution nevertheless, solving the perennial problem of paying to heat a large, cavernous and extremely old building with solar power.

The successful scheme to install 54 solar photovoltaic (PV) power generating panels on the roof of All Saints Church at Wing in rural Bucks follows quite quickly after another, and entirely different, solar power project about 10 miles away.  This involved installing 6000 solar panels on an historic runway used by Second World War bombers, now the Westcott Venture Park. The solar energy gathered there will be enough to provide 1/3rd of the energy used by around 70 tenants. Click here.

Solar panel for solar panel, the project at the Anglo Saxon All Saints Church at Wing is the more unlikely. When parishioners raise money to support their local church, it is generally to finance urgent repairs to a centuries-old fabric, where dry rot is attacking mediaeval timbers, and polluted air is causing the brickwork to crumble.

In recent years churches have fund-raised to modernise their heating, instal toilets and add high-tech touches to their sound systems. But putting a whole battery of solar panels on the roof is daring and pioneering in the extreme for an Anglican church.

However, alignment works in a church’s favour. All churches face east and generally have ample  south-facing roofs, which are ideal for solar installations. All Saints, inspired by the example at St Denys Church in Sleaford, Lincolnshire, which installed panels recently, decided to go the solar route.  Parishioners raised, and secured, the necessary £50,000, and approached Freewatt, a company specialising in designing and installing solar PV systems for domestic, commercial, schools and church projects.

The company, which had done the work at St Denys’s, has developed a unique method of attaching PV arrays to church roofs, which helps meet planning permission. At All Saints it intalled the 54 PV panels from Mitsubishi Electric on the nave and south aisle roofs, concealing them behind a parapet. Now in place and working, the panels will generate an annual income of around £3,000 under the government’s Feed-In Tariff (FIT).

Set against the big picture, this and Westcott’s are still tiny schemes. You could even say token schemes – although the treasurer at All Saints will relish the income guaranteed for years to come. And it remains to be seen by how much the solar panel installation industry will collapse after December 12 (2011), when the government brings in a much lower Feed in Tariff payment.

We may now have to wait 12 to 18 months or more for the price of solar panels to come down to a point where many more such schemes are financially feasible, without a subsidy.  Others will surely follow. But by then All Saints and Westcott will already have quite a healthy little income put aside, courtesy of that pagan old sun.