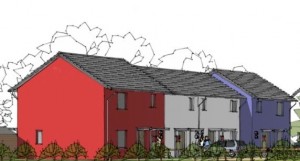 They may not look so different from the outside, but these homes cost hardly anything to heat

The writer has been a frequent contributor to the Sunday Times Home section.

How snug was was your winter? Did your house cope comfortably with the bitter chill of December 2010, or, like most of the rest of us, did you simply crank up the central heating  and throw on more blankets?

Here are two quite distinct developments unlikely to be troubled by cold weather woes in the future.

This month (March, 2011) a  remarkable group of 14 new homes will be completed for a housing association in the Essex village of Wimbish. And in the smart Holland Park conservation area in London, tenants have moved into a  refurbished 1850s terraced house with a difference.

Neither will look so set-apart from the outside. But indoors  the homes will achieve tea cosy standards of  warmth.  Both developments are amongst  the first in Britain to meet the exacting Passivhaus low energy standards. Proponents claim such homes can be kept warm on a winter evening with just a couple of tealights.

The German low energy building Passivhaus rating sets a standard of less than 15kWh of energy to heat the home per m2 per year, compared to the UK average of 130kWh.

The 14 new houses in Wimbish in Essex  have been built by the Hastoe Housing Association on a green field site  alongside the village. The homes are for local people in housing need, for rent and shared ownership now and in the future, and they cannot be sold to the open market.

The Wimbish homes will use conventional gas boilers, supplemented by solar thermal systems, such as solar panels. “Thermal stores” will supply domestic hot water, as well as feeding top-up heat into the air supplied by the heat recovery ventilation system.

“The building stays warm ‘passively’ from solar gain, appliances and people,”  notes a presentation. “You could heat the house with a hair dryer.”

Renovation work has cut CO2 emissions  (compared to the conventional equivalent) by 83% and will save tenants £910 per year in fuel bills.

The home has no gas boiler, radiators or conventional heating system: instead the features listed above keep the house at a comfortable temperature with a healthy air-flow all year round. The airtightness of the building is said the 10 to 20 times better than most current building projects.

In the UK  around 50 Passivhaus projects  are estimated to currently be in development.  In March 2011  work began on another  pioneering social housing development to be built to the Passivhaus standard.

Twelve properties at Horsham in West Sussex will meet the strict eco criteria,  A further 26 homes on  the same street street will be built to Levels 4 and 5 of the Code for Sustainable Homes, making the council properties in total 90 per cent more energy efficient than standard homes.

Chayley Collis, marketing manager for Green Building Store said the German system was “tried and tested”  and “very well thought out and robust”.  She pointed to the advantage of it being suitable both for new house building projects,  and for retrofitting properties.

Secretary of State for Climate Change Chris Huhne  has said he would like to see every new home in the UK reach the Passivhaus standard.

The Holland Park home can be monitored via www.greenoctavia.org.uk. Energy readings will be collected from the home and compared to two similar homes on the same street which have been refurbished to lower levels of energy efficiency.