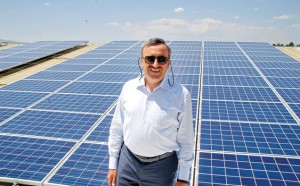 Do holidaymakers  in Turkey care where the country’s energy comes from?  Why should they? They are on holiday.

And yet they may notice the occasional power cut, especially in busy tourist areas. They may also wonder why that abundant sunshine isn’t helping.

The sun is a great boost to the Turkish economy. It’s one of the main reasons people come, to worship and absorb it.

As well as attracting tourists, it powers agriculture. I spend the winter and spring eating vegetables and fruit that owe much of their gestation to artificial indoor light, so it’s a pleasure to taste produce that has matured in real fields in searing sunshine.

It is Turkey already harvesting power of the sun? You cannot miss all those solar panels, gathering guaranteed, free power on millions of rooftops in the long summer months when clouds on the weather map are as rare as snowballs in the Sahara.

It is, and the picture couldn’t be more misleading. This is a very old and long established technology. It doesn’t produce energy; it heats water. Abundant and essentially free (in energy terms) hot water is a very welcome thing, and a big CO2 saver. But these solar water heating systems have  been a common sight in Turkey for 30 years. And while partly-cloudy Germany, and now even mainly grey old Britain begin to extract meaningful amounts of energy from the sun in electricity-generating photovoltaic (PV) solar panels, it’s hard to find them anywhere in Turkey.

Turkey imported 75 percent of its energy (coal, oil, gas), worth $54 billion in 2011. It is a huge share in Turkey’s current trading account gap. Most of its oil comes from abroad, principally Iran, and much of the natural gas used to generate the power in its power stations is imported too.

Now the game may be about to change, but not in a good way. turkey has big plans  to increase its coal-powered electricity generation

There is no doubt that Turkey will need a lot more energy as its economy continues to gow fast. The International Energy Agency (IEA) expects energy use in Turkey to double over the next decade. (Currently about 79.3% of its electricity comes from fossil fuel, with an additional 20% coming from Hydro. Renewables produce a paltry figure.) Meeting this level of growth will require significant investment in the energy sector,

The World Bank has criticized Turkey for failing to utilize its renewable energy potential sufficientlly – hydropower has been its main renewable energy focus, with wind playing a smaller part – arguing that government incentives to renewable energy are too low, a PV FIT of €0.10 per kWh (13¢). Research company ClearSky Advisors has said it expects Turkey to have just 3 GW of PV capacity by 2018.

This land of so much potential, blessed with so much sun, has made a modest start generating solar power.  Just as the UK and Germany did, Turkey has implemented the feed-in tariff (FIT) system. FITs reward individuals and small companies for producing solar power and making it available to the grid.

With the political will, it could turn from lifeguard to leader. Fitting solar panels is quick and easy, not some great civil engineering challenge. And we can see how quickly a country can ‘go solar” in the shining example of Germany, which added over 75% of its now huge capacity in just four years. And it did it during a world recession.