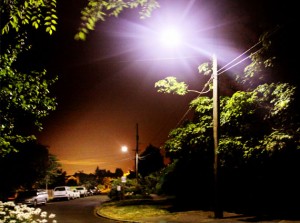 Solar panel and LED (light emitting diode) technology is developing fast, with the promise of bright, low energy lights for inside and outside use. More efficient (and cheaper) LED lights are coming out of labs in China Japan and the US.

We are beginning to hear claims such as “biggest lighting revolution since the invention of the modern tungsten filament bulb in 1907. The implications for the not too distant future are enormous.”

LED lights are bright enough for street light. Seattle in Washington state is pressing ahead with the big scheme to refit streetlights with LEDs.

The village of Whittington in Staffordshire is the first places in the UK to be fitted with LED street lights, in place of old sodium lights. The lights, fitted by  E.ON Sustainable Energy, in partnership with Staffordshire County Council, use 70 per cent less energy, and give a brighter light.

The Midlands-made Marlin lights, fitted in two streets, should give a better quality of light, while using 70% less energy, with lower CO2 emissions.

Michael Woodhead, Managing Director for E.ON’s Sustainable Energy business, said: “Traditional street lighting takes up about 2% of all electricity used in the UK year, so there is huge scope to make this lighting more efficient.

At a technical level, the efficiency of the LED chip structure has gone up.  Brightness is measured in lumens. LEDs now measure up to 208 lumens per watt.