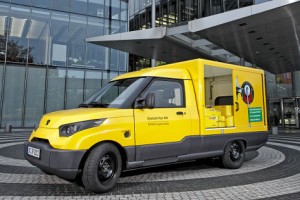 The StreetScooter electric delivery van in the German postal service

Deutsche Post developed the StreetScooter electric van itself, for its own deliveries. Such is its appeal that at least half of this year’s annual production is planned for third party sale. The company sees municipal authorities, and large fleet customers in Germany and the rest of Europe as potential buyers. The prices for its smaller van start at €32,000.

To meet its target Deutsche Post will open another production location, in North Rhine-Westphalia. It is galling to reflect that the UK was manufacturing an electric van as long ago as 2008, only for it to be killed by the Recession.

A German start-up company that built a electric car from only 15 months of development has followed that up by producing a CO2-free electric vehicle (EV) for the German postal service.

The rapid success of StreetScooter GmbH stands in stark contrast to the depressing story of Modec, a promising British electric van manufacturer, much feted by politicians, which went into liquidation because of falling sales in 2011.

Next year (2013) a bright yellow fleet of 50 prototype zero-carbon delivery vans will be deployed by Deutsche Post. The StreetScooter van has passed initial trials with the service, showing enough promise for the project to be extended. The vehicle is being developed with RWTH Aachen University and its spin-off company StreetScooter. The van, powered by a lithium-ion battery, will have a range of 120km on a charge and a top speed of about 85km/h, enough for the average delivery round.

It is designed to handle 200 stops and starts a day and be in service up to 300 days a year. The cost is not stated, although the prototype StreetScooter car could translate into a possible production model costing around  €5000, excluding the battery. The  driver would pay a monthly fee for the battery pack.

StreetScooter is a product of a novel collaboration, between 50 different component manufacturers. No single large company was involved, as it would’ve been in traditional manufacture, telling subsidiary companies what it wanted. Many of those taking part were small and medium-sized firms. They all had equal status, and could provide input. They produced a roadworthy vehicle after only 15 months development time, according to Professor Achim Kampker of RWTH Aachen University and CEO of StreetScooter GmbH

The vehicle was built in modules (such as body, powertrain and electronics), with the companies organized into “lead engineering groups” to concentrate their efforts on their specialized area. Any disagreement between the groups was sent for resolution to a management group. One innovation was a heat pump that has an energy consumption of only 20% of a conventional system air conditioning and heating

While development of electric cars has been accelerating on many fronts pver the past few years, there has been slow progress on electric commercial vehicles.

Modec, based in Coventry, began building an electric van in 2007, for use on relatively short distance deliveries, using a battery which was replaced with a replenished pack at a depot every day. The vehicle certainly worked. I had the opportunity to drive it in September 2008. The vans were tried out by Tesco and other big companies. However sales slid in the recession and the company folded after four years.

Can this innovative small German company, with a van and a car ready to be brought forward to the mass market, do any better?