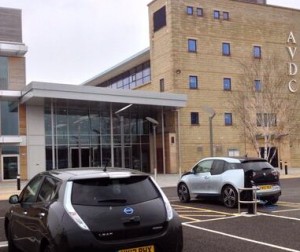 It suits the governments to play down the man made contribution to the smog that affected southern Britain in the first few days of April, 2014.

The Saharan dust was there for anyone to see and feel, on cars and in your eyes. Walking the three quarters of a mile from where I took the accompanying picture, at the head offices of Aylesbury Vale District Council, to the centre of the town, I was aware of both the grittiness in the air and in the underlying “industrial” clog. I am sure there was vehicle pollution in there, although whether from the UK or Europe I would not know.

David Cameron offered his own interpretation, that it was “weather – get over it” although he actually said: “I didn’t go for my morning run. I chose to do some work instead. You can feel it…But it’s a naturally occurring weather phenomenon. It sounds extraordinary, Saharan dust, but that is what it is.”

(On Thursday, April 3rd the Guardian reported: “However, the Department for Environment, Food and Rural Affairs (Defra) has made clear the problem has been caused by a combination of local emissions, light winds, pollution from the continent and dust blown over from Africa.)

We can’t do anything about the Saharan dust, but the vehicle exhaust mixed up with the pollution  poses the more significant danger to public health. And that is something we can change.

Quite by chance that day I saw a vision of the future. Until then I haven’t seen a single electric car tied up to one of those convenient charging points just outside the main doors of the council. On April 2 I saw two, a Nissan Leaf and a very new BMW i3.

So we have two cars that didn’t contribute anything to this smog, at least from their tail pipes. (I know electric vehicles, EVs, can simply mean pollution transferred to a power station, but it is now possible to buy electricity to charge your car from guaranteed carbon-free renewable sources.) Sales of the Nissan Leaf are going nicely, but I have still seen fewer than 10 in the 3 years since it’s been on the road, and I’m the sort of person who looks.

The BMW i3 – It costs about the same  as the Leaf – could be a different matter. Now why should that be? It costs £25,000, which is way above many people’s budget for a new car, including mine.

It’s these three letters. silly: BMW. It’s one of the three very desirable marques, along with Audi and Mercedes, that middle and higher managers want as their company cars. You see them simply everywhere. They don’t want, with all due respect to Nissan and its excellent, revolutionary Leaf, something solid but unremarkable.

Here is very desirable BMW designing an electric car from scratch. It has a range of at 120 miles, although the Nissan Leaf isn’t far behind these days.

In his column in the Guardian, Sam Wollaston had  special praise for the BMW i3 (and it may be worth listening to him because he’s not a conventional motor journalist): “For the first time in, well, maybe ever, I’ve got a new car that is not only interesting and innovative but also likable.”

He described it as: “Quick (up there with a hot hatch away from the lights), well-balanced and responsive. It avoids collisions, with cars and pedestrians. It will stay in its lane on the motorway. And the self parking is the best I’ve seen. There really is a sense that this car is heading towards the future.”

So what’s going to happen to electric cars? My hunch is not a lot for a few years yet. The BMW i3 is a fascinating prospect, but I think the people people (let’s face it, they’re mainly men) who qualify for a good company car will still want one with the low seductive lines of the sedan, rather than the higher, chunkier i3. And they will continue to fret that range will limit them, no matter how many high-speed (20 minutes or so) chargers there are around.

And I fear not enough will care that they personally (and I’m guilty too, but I’m not in a position to buy an electric car) contribute to the possible discomfort of people like the old lady I saw in London yesterday holding a scarf to her mouth, while her grandchildren were having similar problems in nearby schools.

But I just hope it’s not  long before the scene I illustrate here is so common I don’t even think of photographing it.