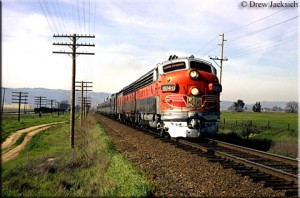 Keep on Rollin' Down the Line - into a new dawn for Americn railways?

Anyone who  has travelled any distance on the roads  in the USA will be be familiar  with the intimidating phenomenon of the  super sized American truck, powering  up behind on their  odysseys across the nation. They may also have noticed  the alternative  transport solution, once marginal but now increasingly relevant. In the US freight trains are vast. Often hauled by three locomotives,  they  seem to go on on forever,  trundling with slow determination through the landscape.   And, note this, progressing with three times the fuel efficiency of the truck

Back in in the UK the good citizens of leafy Buckinghamshire and Warwickshire  crank up their campaign against HS2,  the  proposed high-speed rail way between London, Birmingham, Manchester and Scotland,  building up their argument that there is no need at all for a new railway,  quite apart  from the damage it would do to the landscape.  At the same time support for rail expansion  is growing in the USA, the country where until recently you might least have expected it.

President Obama  mapped out the new  transport landscape  in 2009, when he announced funding for a program of high-speed railway building as part of the recovery programme following the crash of 2008.   The White House  wants to boost funding for railways by more than $50 billion.

There was a great deal of opposition,  from politicians, particularly on the right, opposed to state spending, but the list of possible  new lines is taking shape, and in a land where  there is so much space  to put a railway, and protection of the environment  is not such an emotive issue,  it’s looking increasingly likely that high-speed train travel, now being so feverishly resisted in  the UK,  could be coming quite soon.

Recently I  travelled on the fast trains  on the line between Vancouver in Canada  and Portland in Oregon, and now to points further south.  Just a few years ago  this was a skeleton service, with the few short distance trains every day. It  has expanded steadily, with frequent trains, carrying more and more passengers, running from Canada to Oregon.

In California,  hotbed of green strategising and  low  energy solutions,  plans are proceeding apace for a high-speed line with trains running at up to 220 miles per hour between San Francisco and southern California. In Illinois construction on a high-speed rail route between Chicago and St. Louis is already underway.

But it is the pronouncements of  one of the USA’s canniest  and most successful investors, Warren Buffett, that are  raising most steam in the  railway world.

In his  letter to shareholders in the Berkshire Hathaway company,  (reports Annie Lowrey in Slate –  “Warren Buffett’s big bet for the 21st century: trains.” Buffett  talks about the success of an investment in the Burlington Northern Santa Fe Railway Company,   one of the biggest  companies  running freight trains in the western United States.  Last year Buffett’s Berkshire Hathaway paid $26.5 billion to buy up the 77.4 percent of BNSF it did not already own.

BNSF made a $3.6 billion profit on on $15 billion revenue  in 2010,  with $1 billion in net earnings to Berkshire Hathaway  in the final quarter.  The investor,  not given to hyperbole, said the purchase  was “working out even better than I expected” and calls it the “highlight” of his year.

Buffett described his deal as: “an all-in wager on the economic future of the United States.”   There is  a very simple measure playing in his favour, the price of oil. Last year, BNSF moved each (US) ton of freight about 500 miles  for a gallon of diesel fuel.  That’s about three times more efficiently than long-haul trucks,  even before the latest price hikes caused by unease in the Arab world. And with cheap  oil surely a thing of the past,  railways in the US  have a growing advantage.

The nation has half the track it had in 1970,  although BNSF  and other companies are transporting  more freight than they did then,  even with those languorous locos and  and clunky infrastructure. Union Pacific, the US’s biggest rail company,  posted a 41 percent  increase in fourth-quarter earnings and said it  was recruiting thousands of workers

But is Buffett right  in believing that trains  are a sound 21st-century investment?  The Millennium Institute, a group supporting sustainable development,  totted up  the potential benefits of spending $250 billion to $500 billion to improve the nation’s inter-city railways:  they include  removing most long-haul trucks off the road, giving millions of Americans access to high-speed passenger rail, reducing oil consumption—and increasing GDP.

It’s unlikely that too much  all that money will come from public sources, just as in the UK campaigners see the proposal to spend government money on the north-south high-speed railway link  as wholly unjustified: it seems that only in countries such as Germany, France and Spain  is the idea of  state support for the new rail projects widely accepted.

So in the US, and possibly even the UK,   could the answer  lie in the vast coffers of big business,  the very people who found the funds to create the railroad in the first place?

For a less sanguine view of US high speed rail, click here