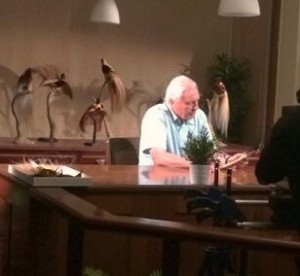 Sir David Attenborough was at the Natural History Museum at Tring this week, filming for a forthcoming documentary which is either about, or includes references to one branch of ornithological  life about which he is passionate, birds of paradise.

He describes them as “the most astounding and ravishingly beautiful birds in the world”.

Tring is a wonderful museum in its own right, all antique charm and serendipity, set up by the dedicated Victorian naturalist Walter Rothschild.

I have been fortunate enough to interview Sir David on a number of occasions. One of those interviews, for  Radio Times, to go with the TV documentary “Portrait Painter to the Birds”, was on birds of paradise. As ever, Sir David modesty diverted the plaudits from his own great knowledge of the birds, shifting the praise to the subject of his programme, William Cooper.

It forms part of my collection of interview and articles on Sir David, David Attenborough – Talking to a Great Broadcaster.

“They are some of the great wildlife spectacles, among the most beautiful and fantastically decorative birds in the world. I have been besotted with them since I was a schoolboy, when I read the travels of the great 19th Century British naturalists, the first Europeans to see these things. These birds are so romantic and they all have legends surrounding them. They all do the most extraordinary things, each with its individual dance and display.”

Sir David Attenborough has a passion for birds of paradise – “the most astounding and ravishingly beautiful birds in the world”. On a trip to Australia he came upon a painting of one, vividly correct to every last splendid plume. Evidently the work of genius, and a fellow devotee. But who was it?

In time he tracked down the elusive artist, revealed in “Portrait Painter to the Birds”, deep into the rain forests of northern Queensland. The trail led him to the door of a shy, softly-spoken perfectionist, one William Cooper. They struck up an instant rapport, swapping memories of birds with names as splendid as their feathers: the King of Saxony, the Magnificent, the Princess Stephanie. They traded travellers’ tales from New Guinea, where Cooper has painted all 36 native species of birds of paradise, and where Attenborough made one of his earliest wildlife films.

Much of the film is shot in the teeming habitat of the artist’s tropical back garden. We see Cooper capturing the iridescent blue feathers and striking pose of the Queen Victoria Rifle Shot bird, which karate chops its wings in the air to make a sound like…a rifle shot.

Cooper belongs to an exclusive band of artists whose rare talent is crucial to science. For the ornithologist, who needs to identify birds by often tiny differences in feathers and anatomy, even the best photograph is not accurate enough. Only an artist can represent with absolute precision all the features by which birds are told apart.

“The way he can convey on paper the many textures of feathers, from coarse to velvety soft, is breathtaking,” says Attenborough. “He even manages to count the feathers.  Within the scientific tradition, I think he is unequalled today.”