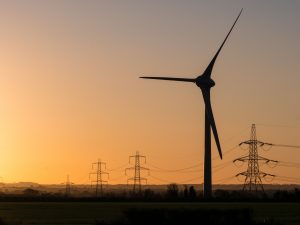 Could the three turbines at Alveston, next to the M5  in South Gloucestershire, be the last wind farm to be built in England in our lifetime, or just the last one until the  government  (or a new one) reverses the policy, and allows further expansion of a form of renewable energy generation which has considerable public support?

The facility, turned on by developers Ecotricity this week (Dec 2017) will provide enough electricity to power, pollution-free, more than 3,000 homes for the next 30 years. It received overwhelming support from the district council and local community alike.

Ecotricity’s  founder Dale Vince, speaking at the launch, said the UK’s once flourishing onshore wind industry had been “effectively killed off by government policy” which blocks all new developments.

A report from the Energy and Climate Change Intelligence Unit (ECIU) think tank supports the widespread view that new onshore wind energy development in the UK is an economic opportunity as well as an environmental one. It estimates the current government policy could add over £1bn to our energy bills over the next four years, because onshore wind is cheaper than other sources of power which the government backs financially, like nuclear, biomass and offshore wind generation.

Dale Vince is a green energy pioneer. He created the world’s first green energy company in 1995 with the launch of Ecotricity, and built his first windmill in 1996 near Stroud. The company now has 25 wind parks with around 70 windmills that generate around 90MW a year – almost a quarter of all electricity used by Ecotricity’s 200,000+ customers.

When Ecotricity switched on its first windmill in 1996, less than 3% of the UK’s electricity was renewable. Today’s figure is around 25%. One of the obstacles to greater levels of renewable energy on the grid is the problem with storing electricity. However recent advances in battery technology made by the global take up of electric cars make this now possible.

Ecotricity has been granted planning permission to build one of the country’s first grid-scale battery storage projects on the Alveston site. The 10MW project will share the grid connection with these three new windmills, making better use of the available capacity – and enable Ecotricity to balance variations between supply and demand each half hour of each day.

Enough is enough? But where are those dammed, elusive wind turbines? This is the piece I wrote in 2012.