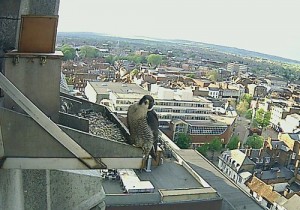 A pair of peregrine falcons is raising a single chick on a nesting platform at the top of the 200 feet high County Hall in the centre of the Buckinghamshire town of Aylesbury.

The falcons have been nesting here since 2011, and I don’t think our sense of wonder should diminish.

All round the world, totemic species such as elephants, tigers and polar bears have big habitat problems. We can’t be confident about the survival of any of them.

Yet the fastest bird in the world, the prize of Arabian princes,  thrives in Britain in high, man-made structures in a number of towns and cities.

In wildlife-watching terms, walking across Aylesbury’s Market Square, or sitting on a bench in front of Waitrose and keeping your eyes trained on the sky around the tower, is akin to sitting in a Land Rover on the Serengeti watching a hunting lioness. In  one depressing respect, it’s better.

While we don’t know what is going to become of Africa’s wide open spaces, and wildlife, over the years, it is hard to see our urban landscape becoming much less accommodating for the peregrine.  I doubt if its easy diet of pigeons is going too die out.

Does the bird deserve the elite status I confer on it? Most certainly. The consensus among the experts is that Falco peregrinus is the world’s fastest bird, indeed the  fastest creature on earth. When freefalling onto prospective prey in a stoop, it can reach speeds of upwards of 186mph (300km/h, or 83.3m/s).

In one Internet entry, Speed of the Fastest bird,  Chris Santoro describes it as “quite possibly the most efficient of all predators.” (The fastest bird in powered flight is thought to be the common swift, Apus apus, which can power itself to 69.3mph (111.6km/h) flying horizontally and even upwards (Journal of Avian Biology, 2010).

To see the Aylesbury peregrines, without much difficulty, and without the need for binoculars, coming into and going from their conspicuous but impregnable nest, and occasionally zipping out at warp speed to terrorise the skies over this small market town is a great privilege and thrill.

Peregrines were first observed regularly in Aylesbury in 2006 and in 2008 a nesting platform was placed at the top of county hall. The birds first bred successfully in 2012 and have hatched young every season since.