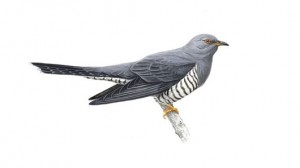 I hardly ever pay attention to new computer games. I don’t play, and while I admire the skill of the designers, I conclude that they are only peripheral to children and young people’s learning experience, good for hand/eye coordination and not much else. And if there are educational games, are they not terribly worthy, and probably a bit dull?

Perhaps I was wrong. I’ve just come across a game for children that could help the cuckoo.

I have a close attachment to the cuckoo. In 2013, for the first time in many years, the bird did not arrive in April to call from the fields close to our house. In the end I might have heard it once, but I can’t be sure. The only other time I heard it last year was flying over our tent at the Hay Festival at about 4 o’clock one morning.

I hope it will be back, in 2014, sometime in that joyous last week of April. But I can’t be sure. I rather fear it may not come. Cuckoos have been rare in the British countryside for 20 or 30 years, so we were lucky to have a “resident” bird turning up (or was it its progeny?) so reliably, year after year.

There are many reasons behind the decline of the cuckoo. Changes in the British countryside, where they breed, is one of the most likely ones. However, the countryside close to where I live hasn’t really changed very much in the past 20 years, so I’m not sure that was the reason for the cuckoo no-show last year.

Climate change affecting other birds’ nesting habits? And it’s a perilous journey to the jungles of South West Africa, although the bird has been making it successfully for many years.

It’s important that, as a society, we are aware of the decline of such a familiar spring visitor, and that we support research into what is happening to the bird. I fear that, because most people never hear the cuckoo, they won’t actually miss it. So we might lose it by default.

The British Trust for Ornithology (BTO) and the Royal Society for the Protection of Birds (RSPB) don’t intend that to happen.  BTO researchers cleverly attached transmitters to cuckoos found in the Norfolk countryside in 2011, and have since expanded the scheme. The birds are at this very moment transmitting their whereabouts as they move up from South West Africa.

The RSPB has its own programme, Birds Without Borders, designed ultimately to protect the cuckoo in the real world.

And this is where the computer game comes in. The RSPB has teamed up with Two Creature Studios, a British game development house founded in 2012. Two Creature Studios is devised something, available now on iPad and iPhone, which sounds quite far from dull and worthy.

Cuckoo Corner is described by its developers as a “a new graphically lush virtual pet game”. It costs 69p, through the the Apple App Store. For the first three months, 50% of profit made through purchases will go to the Birds Without Borders.

I confess I haven’t played this game, but for that matter I have never played any computer game. I don’t think I’m qualified to say how good the game is, or to describe the playing experience. So I’m restricted to passing on what the developers tell me.

They say the game challenges players, who, from my reading of the press release, would appear to be rather young, to look after a “playful cuckoo” of their own in a ”graphically lush open 3D environment”.

I suppose players will be proxy parents to this big and nest-dominating bird, just as the meadow pipit, dunnock and reed warbler are in the wild. Players are presented with a choice of eggs they can hatch their cuckoo from. The cuckoo hatchlings all have different character traits.

Rich Albon, Co-Director of Two Creature Studios, said their aim was to create “beautiful and engaging character-driven games”. Two Creature promote their games as “fresh, honest, fun, and beautifully designed and drawn – whether they’re on smartphone platforms or consoles, or home computers.

“Parents who download Cuckoo Corner for their kids can do so in the knowledge that the world of the game is a safe space their children can explore, and that the experience of playing the game is one that promotes caring for animals, learning, and the concept of ‘play’.”

50% of the profits Two Creature Studios makes from the game over the course of the next 3 months will be donated to the RSPB’s Birds Without Borders project, to help protect the cuckoo in the real as well as in the virtual world.

The cuckoo is now a ‘red list’ species; the worldwide cuckoo population has declined by 65% since the 1980s. Any raising of awareness and commitment to action is to be welcomed.

The team behind the Birds Without Borders project track and study the routes taken by migratory birds—including cuckoos—in tandem with international partners, with a view to creating the protected breeding habitats that migratory birds need to flourish once more.

The RSPB’s Migrants Programme manager, Danae Sheehan, said: “For long-distance migrant birds, such as the cuckoo, moving regularly between breeding grounds in Europe and wintering areas in Africa, conservation must be delivered [to] reflect their needs at different stages of the year and operate at a scale that transcends national boundaries.

“Birds Without Borders Programme reflects a commitment to deliver effective conservation for some of our most rapidly declining migrant birds – cuckoo, wood warbler, ring ouzel, swift, yellow wagtail, turtle dove, whinchat, pied flycatcher and spotted flycatcher. We work in partnership with others to protect, conserve, improve, restore and create habitats where these species need them the most – in the UK, Europe or Africa.”