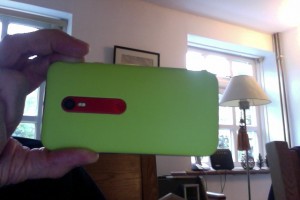 I have a new camera / radio (though I mainly use BBC iPlayer, liberating me from the schedule) /tape recorder / personal communications centre / computer. Oh, and it’s a telephone too. It’s also a timepiece and very handy alarm clock. My day is punctuated by short-term alarms – a great motivator which I can recommend. Go on, set your phone to 38 minutes (the time of my regular train trip), or something equally arbitrary, and don’t stop working until it goes off.

Although it could be a Samsung, or an Apple 6 or a Nokia – which fulfil all those functions equally effortlessly – it’s actually the latest, third-generation, Motorola Moto G. And unlike those phones above, which are not the “owner’s” property until the contract is up, my nice new phone, with its gorgeous lime-green back, belongs to me.

I can easily work out exactly how much it’s costing me. The phone itself comes to £179, and I have a contract with EE which cost me £19 a month. I could pay more if I exceed my data limit, but I’ve got into the habit of using free Wi-Fi when I’m away from home most of the time, only dipping into my data allocation to catch up with emails and Tweets occasionally. I’m regularly well below my monthly limit, and am thinking of going for a cheaper contract.

Until I was given my first Moto G last September, I never really thought about what my previous contract phone was costing me. It was just a monthly outgoing, as normal as a gas or water bill. Was there a way of cutting a bill significantly? There was, by doing what I’m doing now, but I never thought of it.

I’m a little surprised that the Moto G is seen as a phone for, at least in part, the developing world. At the launch of the new Motorola products in London in July, one of the live feeds was from São Paulo in Brazil, where this phone is very popular. I assume people there have done the maths, and see they can own a very acceptable smartphone for not very much.

How can you deny the enormous pulling power of the Apple iPhone 5 and 6? Try telling a 15-year-old that he or she will have to make do with some cheaper alternative, as their parents are paying, rather than those phones I have just mentioned, dripping with street cred. Until they can afford their own. The Moto G market probably lies elsewhere. I’m not competent to say where, but, people like me, for example, whoever “people like me” are. Another random suggestion: if a company, say, wanted to fit its workforce out with mobile phones, and price was an issue, then why not this?

It might be people who want that every day, all-functions, all-tasks, support system for, say, something around £29 a month. That’s less than a pound a day for this little device that does so much, and you buy yourself a new one after 18 months. And you can sell your existing one in one of those High Street shops, or on eBay for an unknown price, but you would settle for £60-£80, wouldn’t you? So that could reduce the actual monthly running costs, including the price of the phone, to around £23.

Oh dear, Motorola’s press office will be saying by now, I haven’t actually mentioned the phone itself. Well, it looks good, in my opinion. I was instantly smitten by the elegant lime-green back and the cherry coloured bar in the middle where the camera lens and flash are. The screen (5″ HD display; 67.0% screen-to-body ratio) is brighter than the previous one, and, I hope, harder to scratch, with its Corning Gorilla Glass 3. The other cosmetic details would not mean much to the average consumer. They got rid of some raised elements on the front so it feels, as well as looks, very smart indeed. It weighs 155 g, and is 11.6mm thick.

There’s no point in turning this review into a comparison between what the Android system, which is also on Samsung and Nokia and the others, does and what the iPhone’s iOS operating system does. (Although I miss iOS’s Face Time, there are perfectly workable alternatives.) Better to concentrate on what particular improvements there are on the third generation Moto G, over the second-generation.

The feature I probably use the most, the camera, is noticeably better, 13 megapixel (MP) compared with 8 MP. This is a photograph I took, into the sun, at Stratford-upon-Avon. the front camera is 5 MP. The new phone has 4G rather than 3G in its predecessor.

And it promises to stay functioning after mild immersion in water – they demonstrated this at the launch (water resistant up to 1 metre and 30 minutes), although any cautious owner would want to snatch it out of the drink as quickly as possible. I just took their word for it, and hope I don’t have to avail myself of that feature. (Now, what’s that statistic for the number of people who drop their phone in the toilet?)

As a long-term smartphone user, I’m getting to the point where I can’t imagine what more I would expect from the device. The price is right, the weight is right. I could probably shoot my first documentary on it. My real ambition is to take a photograph to match those we see in those enormous iPhone 6 ads, taken by some ordinary owner.

Better battery, you might ask? “Battery lasts all day” is Motorola’s claim. Mine does seem to have longer life, but we’ll see. There’s also a slot for an optional microSD card with up to 32 GB capacity.

I imagine the frustration Volvo must feel when they see the obsession middle management (mainly men) have with the BMW and Audi. For BMW and Audi, in this context, read iPhone and Samsung Galaxy. A year ago I wouldn’t have thought Motorola had sufficient quality to play Volvo’s part in this particular comparison. With the third generation Motorola Moto G, it is not so far-fetched. (I drive a Volvo, so I am qualified to comment here.)

There’s another thing to say about cars. Cars are a serious investment, trailing a slipstream of virtual £50 notes as you drive them out of the showrooms. We buy new cars, knowing that. And yet we don’t, most of us, buy new phones. The smart phone is the most useful thing you have by you, day-to-day, and if it loses half its value in 18 months – that is depreciation you can accept. That is why owning a Moto G makes sense.

This is ridiculously corny, but what an opportunity to quote Bogart. For me, considering that Apple doesn’t seem to have even missed me, I think this is the beginning of a beautiful friendship.