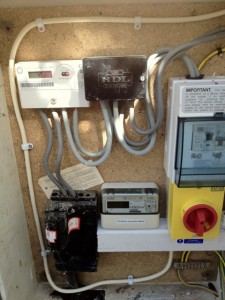 Bet Cartier-Bresson never had to photograph inside a meter box. But, hey, if it means more accurate bills…

Smartphones have been around for several years now, and there’s a legion of apps available to use on them. They are supposed to to make our life easier, as well as entertain us. But how many do something that nothing else can, rather than give us information rather quicker, and more conveniently, when it’s already available elsewhere?

I find weather apps useful. And the Train Line app. I can read the BBC headlines wherever I am. But what about something that no other technology can do, helping out in an everyday way in chores such as reading my meter so I don’t have to have it estimated? EDF Energy has an app for that, and they’re claiming it is the first in the field, at least in the  UK.

The company’s app will allow its customers to submit meter readings – using the camera in their smart phones. It should ensure that many more people receive correct bills based on what they’ve used rather than estimates. It could also hasten the end of that lonely and frustratingly hit and miss career of the meter reader, whose working hours coincide with the time when most people are out.

Customers will be able to photograph electricity or gas meters on their property with their smart phone and send the image to EDF. Their account will be automatically updated, and with an accurate total.

EDF say this is the first app capable of reading energy meters by photo to be launched in the UK. It can also be used to track previous meter readings. Customers will still be able to submit their readings by typing them in if they prefer.

The app also enables customers to access instant rewards in EDF Energy’s customer reward programme. Customers can also read tips and advice on how to lower energy usage via the app.

The  app can be downloaded at www.edfenergy.com.

EDF Energy is one of the UK’s largest energy companies and the largest producer of low-carbon electricity, producing around one-sixth of the nation’s electricity from its nuclear powerstations, wind farms, coal and gas power stations and combined heat and power plants. The company supplies gas and electricity to more than 5.5 million business and residential customer accounts and is the biggest supplier of electricity by volume in Great Britain.

EDF was an official partner and the electricity supplier of the London 2012 Olympic and Paralympic Games, The company had a big presence at Olympic Park doing.