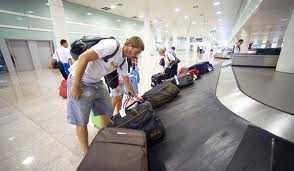 The holiday is over. Now for the hard bit

What’s the single place tourists most want to escape from the course of a holiday abroad?

Why of course, it’s the airport terminal after the return flight.

And which journey do they dislike the most, in the course of their trip?

You guessed, the one that gets them home from the airport, when they aren’t being driven.

I have no actual facts to support those two statements, but they apply to me, so I assume you feel the same way.

Once, after a flight home from the USA, it took my wife and I four and a half hours to travel from Heathrow to our home, about 35 miles away. That’s more than half the transatlantic journey time.

High-powered business people are used to being whisked to and from the airport, and quite a few holiday companies do home pick-up and delivery, although most apply limits. Who’s been chauffeured from Dundee to Heathrow recently?

Saga Holidays was one of those offering door-to-door service, but they too had their limits. Now, with adverse economic winds buffeting the holiday market, they decided to drop them. The limits, that is.

So, theoretically, if you live in John O’Groats, and have a holiday with a long haul flight booked with Saga, from January 1, 2012, they will send a chauffeur to pick you up and drive you to London for your flight, then do the same thing in reverse on your return. And at no additional cost.

Catches? They don’t seem to be any. I heard chief executive Susan Hooper make the announcement at a press reception in London (September 20, 2011), so that’s the company publicly committed.

Is it the only company providing this service? I don’t know. But expect any others to come forward. I hope they do.