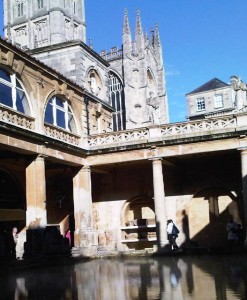 The part of Bath everybody visits. But what about the lesser-known places?

Twitter is already a serious alternative to the conventional news media.   You can’t say much in 140 characters,  and you can impart important information very quickly,  and also guide people to further reading.

This is a simple example of the former.  Say I arrive at Euston station and find a big throng of people on the concourse, all staring up at the train information boards. Nobody is going anywhere.

All the boards tell you is that  trains are delayed. On  Twitter on my mobile phone  I search  “London Midland” (the train company I use)  or “Euston”  or “  Virgin” and within seconds the Cloud is telling me what’s wrong.

It’s very easy to  pin down the problem and precisely where it is, from  the accumulation of  tweets, either from @LondonMidland themselves, or  people who are on delayed trains. This  invariably beats the station announcer’s  often intermittent messages, and is  on your  phone within seconds. @LondonMidland is particularly helpful. There is an unnamed person, or persons,  issuing information about train delays all day long, and politely responding to passengers who include the address in their message.

Once, stuck on a stationary train, I issued an appeal through a tweet to anyone in the Harrow area – where I knew the  problem was –  to ask if the trains were moving yet.  A perfect stranger responded to say they had just started to move, which meant that trains stuck behind would be  on their way soon.  We knew this sooner than the guard on our train.

Earlier this summer the leader of Buckinghamshire county council told councillors that for his generation, “tweets are for blackbirds”.  To be fair to that council, some departments actively use the medium:  for example, for road gritting in the winter. The Council tweets to say when their vehicles are gritting,  and direct you to a website showing, through GPS, precisely where they are.

This week  (September, 2011) 29 Scottish Councils  combined for a 24-hour tweet project to inform citizens.   My local council, for example, issued an invitation to people to help plant wild flowers.

I looked at how various city and  regional tourist boards in the UK are using Twitter. It varies quite a lot. Most tourist departments use the medium and issue regular updates on things happening,  and  new attractions and  interact  with the Twittersphere. I found Oxford and Bath particularly good at this,  and there are others.   But there were a few, too,  who are not regular,  and   can go days or even weeks without tweeting.

How useful could Twitter be to tourists?   The Guardian has published a number of articles  by journalists who went to destinations, such as Birmingham  and Manchester, and asked local people to suggest what they should do and  see, using a specific keyword and hash tag.

And this summer (2011) @VisitBath, the official tourism website for Bath, invited journalists to visit the city and solicit similar advice  during a day’s sightseeing.  @VisitBath have published a  digest of what  people suggested.  I visited Bath almost a year ago.  The main sites, such as the Roman Baths,  and the Crescent, select themselves, and you hardly need the Bath Twitterati  to point them out.

But the Twitter tour wins when  it points to places such as  cafes, that the innocent outsider could  easily miss, unless he or she  spends quite a few days in town, indulging in a lot of trial and error, and potentially spending a lot of money. If enough people are suggesting a previously unknown place,  and  one which is perhaps too recent for the guidebooks,  then perhaps it’s worth a visit. It’s the same with restaurants. Guidebooks are helpful, but can be out of date.  What if the star chef has moved on since the last edition?  You wouldn’t know. But if somebody  who once there the night before  is advising, that could count for something.  Two big advantages Twitter has are immediacy, and insider knowledge.

We are only at at the beginning of the Twitter revolution (or whatever revolution will replace it over the next  three or four years) and there are still big empty spaces.  Many people, and they include travel professionals, use  Twitter only fitfully or not at all.   (I recently spoke to a PR who told me certain of her North American clients asked for promotion through social media all the time, whereas another client, a well-known UK name, didn’t think it at all appropriate  for their market and  didn’t want  it used in promotion.)

I have tried Twitter tourism, tentatively  asking for information in certain cities   but receiving  no tweets at all in response. But then I don’t have many followers.  I’m sure this will change.   Twitter is a wonderful, almost instant way of disseminating information  to potentially millions of people out there.   I feel a buzz of  and vitality with a perfect stranger talks to me, ideally in a positive way.  (This may not be better than talking to people in person,.) But it certainly quicker.)

As conventional  news media decline,  and I include TV and radio news in this, Twitter, or whatever it evolves into,  will  grow to be ever more useful, and in ways we cannot even imagine today.